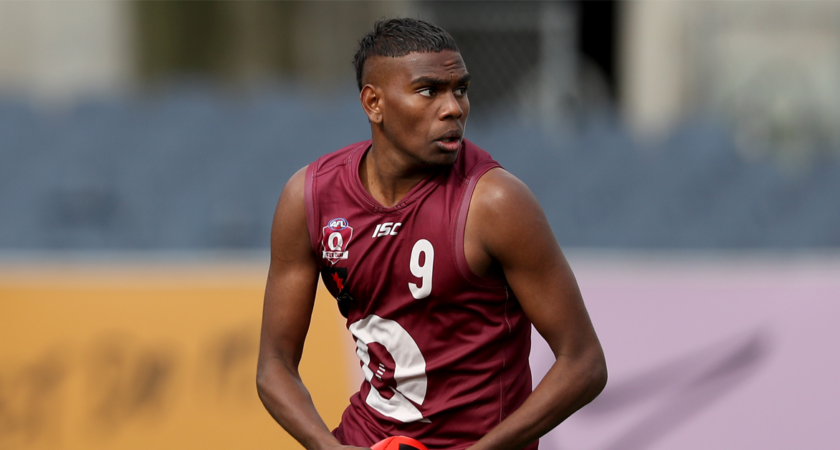 AS the postponement of all seasons commenced over the last few weeks, we are taking a look at some of the up-and-coming draft prospects for the 2020 draft. In a special Question and Answer (Q&A) feature, Draft Central‘s Peter Williams chatted with Brisbane Lions Academy prospect Blake Coleman. As we delve into the Queensland-based talent, you’ll get to know everything you need to know about the brightest academy talents.

The eye-catching forward is near-unbeatable inside forward 50 at full flight, with his clean hands and goal sense setting him apart. While the 180cm prospect is working on his endurance, his speed and power over the short term have put him in good stead. Having represented Queensland at Under 16 and 17 level, and running out for Brisbane during the Academy Series, Coleman is looking to break into the Allies side and follow in the footsteps of brother, Keidean in reaching the elite level.

>> CATCH UP ON ALL OUR FEATURES

PW: How have you found testing today?

BC: “It’s been good. It’s been a long day but it’s good to come out and do it, see all the teams come out and the boys supporting each other through it. It’s always tough, especially with the yo-yo at the end but the boys’ support is good. It helps you get through it.”

You mentioned the yo-yo, is that one of the areas you’re looking to improve on?

“I’m definitely looking to improve on my fitness throughout my journey as I get better. I know I haven’t been the best but I’m just looking forward to improving which is always exciting.”

How’d you find the other tests?

“I found them pretty fun actually with the agility and 20-metre sprint. It’s good to test yourself and try to beat your previous records.”

Do you see those areas as your strengths, testing-wise?

“Yes, I think speed is something I love to use during games, which I find as a strength.”

How’s the preseason been overall so far?

“Preseason is always tough physically and mentally but it’s good. It’s always a challenge but it’s stuff you’ve got to do to improve as a player.”

You had some time to train with the senior Brisbane Lions boys as well?

“Yes, we got two weeks with Brisbane throughout the preseason which was a good experience for some of the boys in the squad. You can definitely see how fast it is and just the skills are very good. We definitely got a lot out of it.”

What’s it been like for you watching your brother getting a chance in the AFL as a 19-year-old?

“Watching him was good. I’m very proud of him because he obviously didn’t get selected in his (top-age) year but didn’t give up which our family is very proud of him (for). He kept going and he achieved in the end which was good.

“Getting to train with him throughout those weeks, he definitely made it much better because I’ve been around him obviously my whole life, it was good.”

Does that give you confidence as well, knowing that if you don’t get drafted at the first chance, you’ve got another year to prove yourself?

“Definitely. Knowing that if he could do it, I can as well. It’s something I can be confident with, I’ve just got to keep going and I know I can do it if I just stay strong and believe in myself.”

On-field, what do you see as your strengths?

“Maybe my marking. I love jumping and contesting for the ball, I love to tackle and put pressure on. There’s strengths there but there’s obviously room to improve as well.”

Do you have a preferred position?

“I play forward which I much prefer, but I do like going through the midfield as well which is a good experience.”

What goals are you hoping to tick off this year?

“My goals this year are to hopefully play all the Academy Series games, which would be nice to get through those. Then obviously the Allies squad which I’d love to play in, all games later in the year.

“Obviously at the end of the year to try and get drafted which would be something I’m very proud of – not only for me, but to make my family proud. Moving here with my brother was a tough decision but it was good, so the family back home would be very proud.”