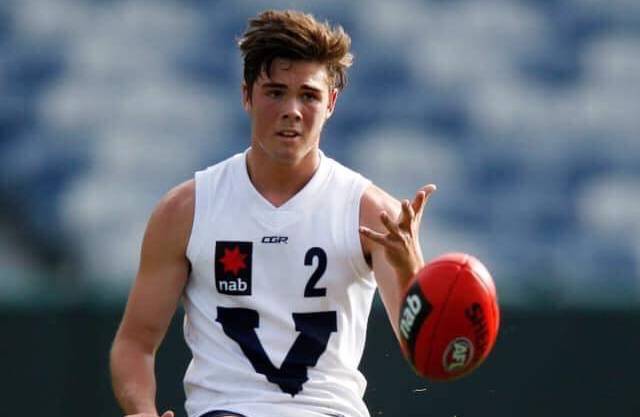 AS the postponement of all seasons commenced over the last few weeks, we head back to the pre-season where we sat down with a number of athletes across the country. In a special Question and Answer (Q&A) feature, Draft Central‘s Michael Alvaro chatted with Sandringham Dragons’ Campbell Chesser at the NAB League Fitness Testing Day hosted by Rookie Me.

The Lavington junior hails from Murray’s region, but features among the Sandringham program given he has boarded at Melbourne Grammar since the start of Year 9. A very capable sprinter in the athletics realm, Chesser captured attention with his speed from half-back, the wing, and through midfield in last year’s Under 16 National Championships. Having earned All Australian honours there, he made his NAB League debut in Round 17 and played in the Dragons’ two finals appearances.

MA: Campbell, how’s the day been so far?

CC: “It’s been good, I’m down here testing with the (Murray) Bushrangers at the moment. But the event’s running pretty smoothly, we’re not waiting around for too long and the results have been pretty good so far.”

Which are some of the tests you feel you can thrive in, and ones you might be improving on?

“I think the agility, the one I just did is probably one that I’ve got to improve a little bit on. I think speed’s definitely a strength in my game so being able to exploit that – I tested pretty well in the 20m sprint which was good.”

You were able to showcase that speed last year for the Vic Country Under 16s, it must have been a great week up in Queensland?

“It was good, we started down in Geelong against Metro and fell short there. It was a good game, the boys competed really well. Then we went up to Queensland and it was a great carnival, a good week with the boys away. We didn’t get the result we wanted against WA but then finally got the win in the last game at the GABBA which was good.”

How has the transition from the Murray region, to boarding at school in Melbourne and coming into Sandringham been?

“I’m loving it. I moved down at the start of Year 9 and it’s been really good to find a balance for footy, or sport in general and studies as well. It’s been good, the culture down there is awesome in the APS system, I’m loving it.”

Who are some of the boys you’re looking forward to running out alongside across your multiple teams this year?

“I’ve got Sam Berry, who’s from Gippsland and also a boarder along with Chance Doultree and Harry Sullivan. There’s a few boys from the NAB League system who have come into the APS system so I’ll be playing alongside some good players and good mates, then competing against them also.”

Are you keen to lock down a certain role this year?

“I think it depends what team I’m in. For Sandy I’ll probably play across half-back a little bit this year and just try to improve that versatility as much as I can. For school footy hopefully I’ll go inside, play a little bit through the middle and hopefully get forward a little bit as well which would be good.”

Are there any goals you’re looking to tick off?

“Yes, hopefully I’ll play in the Australia (Under 17s) vs. New Zealand game coming up in April. Then the ultimate goal for this year is to probably put myself in the best position for the National Championships as a bottom-ager.

“Hopefully I can play in the Futures game at the end of the year too, so it’ll be a long year but I’m looking forward to it. Not too much pressure which is good, (I’ll) just enjoy the year really.”