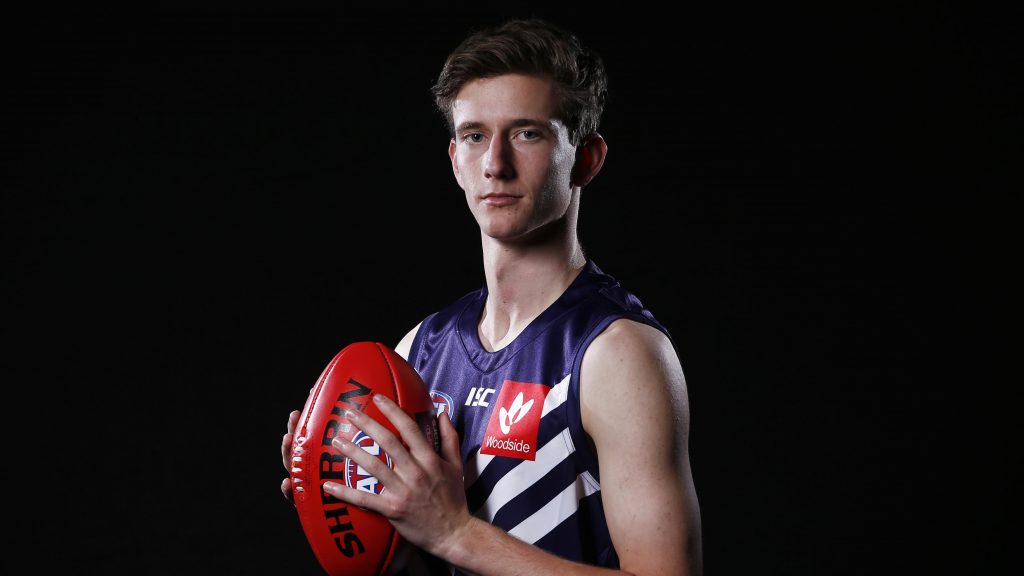 THE AFL is a week away from kicking off against after a long couple of months. For a dozen players who made their unusual, but highly memorable debuts in Round 1 of the AFL Premiership season, we look back at how each of them performed in their respectively games with some impressive efforts.

The Round 1 Rising Star was sensational in Fremantle narrow six-point loss against Essendon. The Dockers were unlucky not to get the win as they booted four goals to one in the final term only to fall short on the road against the unpredictable Bombers. With plenty of fresh faces, Sturt was the surprise packet with the 2018 National Draft bolter booting three goals from 10 disposals and notching up a SuperCoach century on debut. He ran at 90 per cent efficiency and had seven score involvements, so was just as capable of sharing it around as others.

There must be something about raw but talented forwards, because Mitch Georgiades’ performance on debut was sublime for the high-flying forward. He missed the entire 2019 season with a quad injury and was a bolter in the 2019 AFL National Draft, but very few would have predicted a Round 1 debut. But that is exactly what happened and he showed he was far from making up the numbers with the West Australian booting two goals from 11 disposals, three marks and three inside 50s, and running at an efficiency of 73 per cent.

From a couple of surprise packets to a player no one would be remotely surprised with the numbers he picked up, as the number one pick seamlessly slotted into the AFL’s bottom side. He racked up 19 disposals – the most of any debutant in Round 1 – and had the equal third most of any Suns player. Despite running at a tough 57.9 per cent contested rate, Rowell still finished with 74 per cent disposal efficiency, and had four clearances and three intercept possessions.

The Adelaide key position player was able to slot into the team in Round 1 as the Crows had to restructure their key talls in the absence of Alex Keath. He showed some promising signs, and while still made the odd mistake, was able to play a difficult role in a tight game.

Unlike the other players on this list, Robertson was a late call-up to make his debut, coming in for Grant Birchall. He still played 72 minutes and showed the fierce intent he did at Under 18s level to lay three tackles and win seven disposals.

A starring role early for the Magpies that even saw the debutant hand off a goal to his brother Callum in Collingwood’s first half onslaught against the Western Bulldogs. While he slowed in the second half, he still had the 15 disposals and 64 SuperCoach points and showed the silky smooth moves that he did at Under 18s level, three years into his AFL career.

The second pick in the 2019 National Draft held his own in a disappointing loss to Port Adelaide. He predominantly played off half-back and roamed up the ground on occasions, winning some touches on the wing. He finished with a debutant-high 246 metres gained in Round 1 which was the most impressive aspect of his debut.

The slick ball user ran at 75 per cent efficiency, and while it was always going to be interesting to see where Stuart Dew utilised him, Budarick played 100 per cent of his footy in the defensive half. He was able to finish with four intercept possessions and three rebounds on debut, an impressive performance from the utility.

Tasting victory on debut against the Cats, Green was not afraid to force his way in and win the contested ball. He only had the six tackles, but the bulk of his time on-field was in the centre, and he had 83 per cent disposal efficiency, as well as a couple of clearances against an experienced midfield.

The former Dandenong Stingrays player earned a spot in the team after a year in the VFL, and he finished with 75 per cent efficiency off eight touches. He also laid two tackles, two inside 50s and set up a goal to end the match with a solid debut effort despite Melbourne’s loss to the Eagles.

He always had the X-factor and talent down pat, and he showed some exciting glimpses on the big stage in the west against the 2018 premiers. He had 11 disposals and a debutant second-high 228 metres gained, showing he was not afraid to take the game on. He made a few mistakes with four clangers, but considering what he offered and the benefits he brought, it is better to see him taking those risks.

When it came to feel-good stories, very few could top Ben Cavarra who joined the first-kick, first-goal club when he was awarded a free kick inside 50, and kicked truly at the 20-minute mark of the second term to give the Dogs back-to-back goals for the first time. He might not have won much of it, but with one of the lowest inside 50 counts of all-time, even All-Australian forwards would have struggled inside 50 on that night.