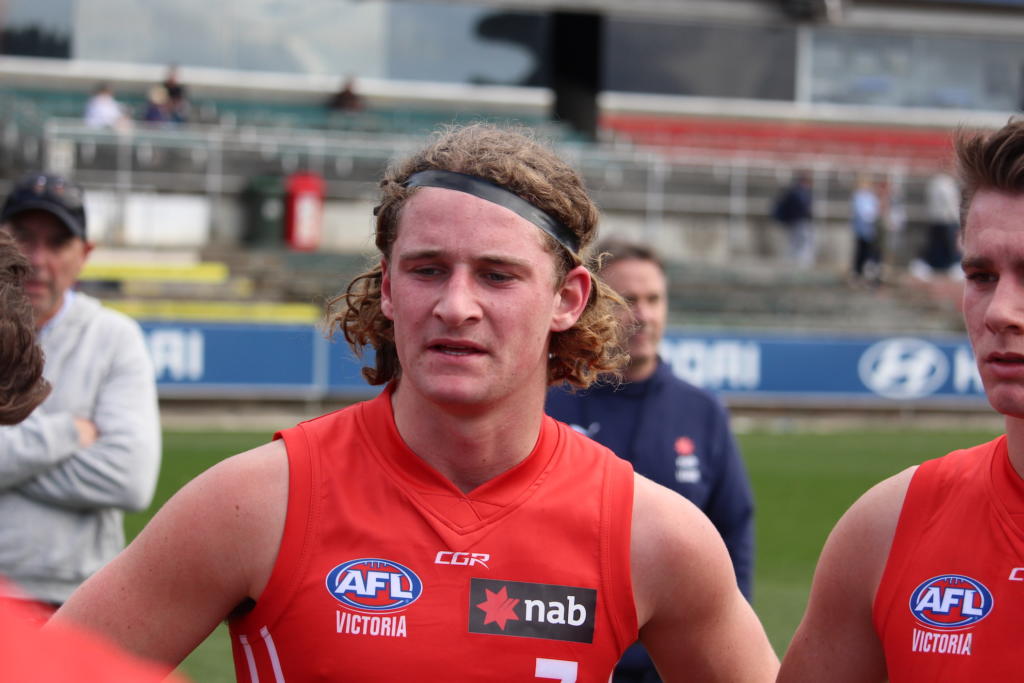 Next under the microscope in our AFL Draft Watch is Gippsland Power’s Sam Berry, a powerful inside midfielder who can run all day. Hailing from Maffra in the Power’s region, Berry has grown accustomed to the elite standard not only through his local program, but also as part of the APS Football system at Melbourne Grammar. Having represented Vic Country at the Under 16 and 17 levels, Berry was also a mainstay in the talent-rich Gippsland side last year in between his school footballing commitments.

The 180cm prospect is well poised to become an integral part of Vic Country’s midfield should the National Championships go ahead, able to put into actions the learnings passed down by the likes of 2019 Gippsland graduates Caleb Serong and Sam Flanders. Berry thrives in the contest and is not afraid to get his hands dirty, able to consistently win his own ball and power his way through congestion.

The bottom-age midfielder provided a number of highlights in the game, able to gain separation from his opponents in midfield and hit targets forward of centre. He created a goal for Riley Baldi, kicking well inside 50, and then showed off his lovely left foot again – playing on to hit-up another target later in the game inside 50. He ran hard throughout and took a courageous mark back with the flight early in the third term.

Berry was his team’s standout player with his grunt work in the middle setting the tone for the day. His work rate with and without the ball was impressive and that carried on for the four quarters. He would also hit the scoreboard with his goal coming from reading the play to mark 40 metres out to slot the nice goal.

His clearance work was great but it was also his skill with ball in hand that stood out, and despite looking like the type to just win the hard ball and bomb it, he actually took the time to hit his targets on both feet. His only real blemish was an ambitious kick in the corridor on his opposite foot. Berry finished the game with 23 disposals, six tackles, six clearances and a goal in a complete performance through the midfield.

A typically tough, in and under day for the bottom-age midfielder. Starting at the centre bounces, Berry got involved inside 50 during the first term with a nice goal assist to Tom Fitzpatrick by hand. He got busier through the midfield in the second quarter, somehow stealing a clearance seemingly straight out of the hands of an opponent before sending the ball forward.

His possessions were heavy, which occasionally lead to him rushing the ball forward and producing some messy disposals. He fought hard though and was one of Gippsland better players, collecting 21 disposals and laying five tackles.

A match-winning effort by the small midfielder who put together a terrific four quarter performance. He showed great thinking under pressure with quick hands and was able to balance well between offensive and defensive work.

He laid a massive amount of tackles, and booted three goals – all of which came from tackles. His first goal came in the second quarter, nailing the set shot with a Ben Brown-like run-up from 55m, while the last two came back-to-back at a crucial time in the last quarter, converting set shots from 40m and 30m out respectively. His last quarter was special and he is so strong one-on-one for his size.

The in-and-under bottom-ager was one of many relevant players returning to the Gippsland fold and he continued on from where he left off earlier in the season. He is a competitor who does the heavy work on the inside with determination, often getting first hands on the footy cleanly and extracting to advantage.

Berry has a physical presence defensively and ensures his opponent doesn’t get an easy touch. I loved his overhead work on Saturday too, taking a great contested mark in the corridor under pressure and backing that up with a leaping effort at half back in the last. One of the better players on the ground finishing with 26 disposals and five tackles.