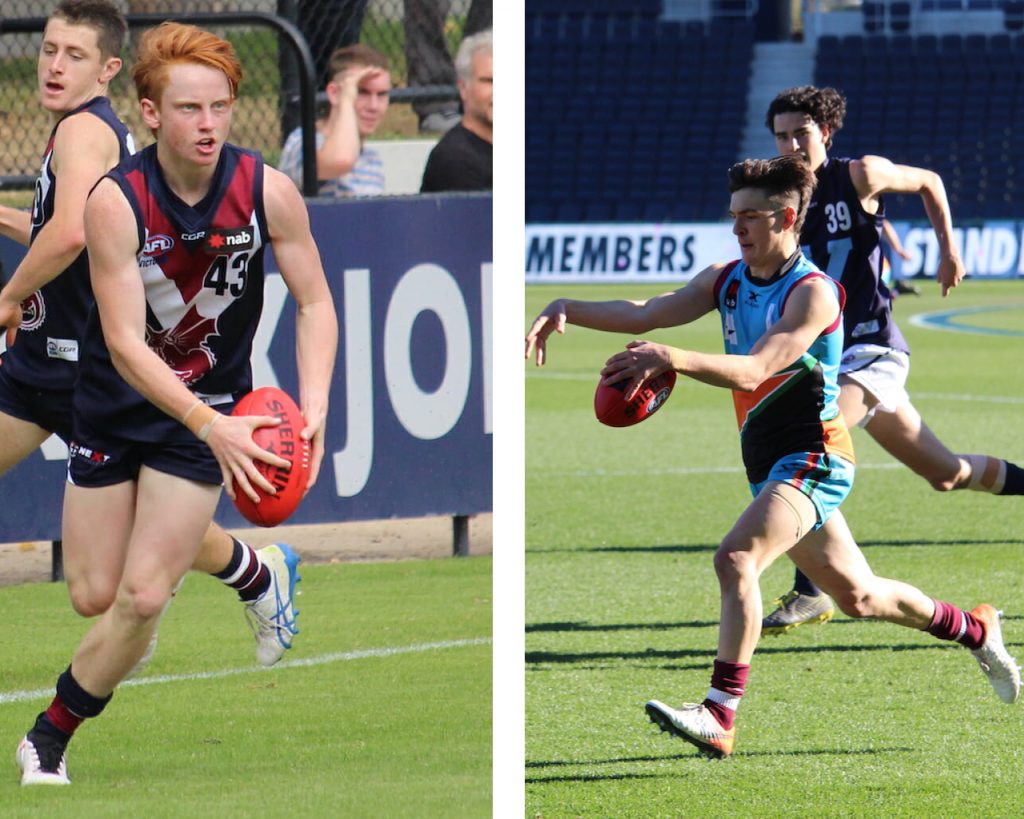 The next pair under the microscope again comes from the small department, with crafty Sandringham wingman Jake Bowey matching up against the equally clever Sydney Swans Academy product, Errol Gulden. Both players measure up at under 175cm and thrive on the outside, but are more than capable of having a big say on the sway of games. They met during last year’s Under 17 All Stars Grand Final curtain raiser, and will likely directly oppose each other during this year’s Under 18 National Championships, should it go ahead. Both also featured for their respective state sides at Under 16 and 17 level as key players in either squad.

Bowey became a mainstay for Sandringham in the NAB League in 2019 despite the Dragons boasting a wealth of high-level top-agers, running out 16 times for an average of 15.8 disposals and 2.8 inside 50s. Gulden’s resume is also impressive to this point, having taken out the Under 16 Division 2 MVP award for NSW/ACT and setting the NAB League alight across just three games to average 27.3 disposals, eight inside 50s and over a goal per game. Gulden has already broken into the Under 18 Allies side, too playing all four games during last year’s carnival.

Note: Gulden did not participate in the scheduled NSW/ACT preseason testing day.

While we cannot compare the two in terms of their preseason testing results given the lack of data on Gulden’s end, we can quite clearly observe the incredible athletic ability of Bowey. The diminutive Sandringham product has all the traits that smalls require as a minimum at the next level, posting elite scores for speed and agility, while also adding the surprise element of his vertical leap.

Bowey has said himself that he is working on his repeat power running and overall endurance, but stacks up well in all departments against any Under 18 athlete. As far as the eye test goes for Gulden, he would run very close to the kind of scores Bowey produced for speed and agility, while his ability to constantly stay in the game is credit to his endurance. It will be interesting to see how the two compare come combine testing later in the year.

Obviously it is difficult to put the statistics of Bowey, who played 16 games in a squad with superior depth, next to Gulden’s three-game cameo, though the saving grace is that the data comes from the same competition. Gulden was exceptional across those three outings, but should one pick out Bowey’s best three games, the numbers gap tightens.

One thing that does match up, identically, is the pair’s uncontested possession rate. It only proves how much they rely on running the outside areas, with 63.9 per cent of their possessions coming outside of a contest. Gulden’s unbelievable disposal average, which includes a high of 33, outlines his superior tank and ability to accumulate in those areas, while Bowey tends to find more of his own ball and participate a touch less in possession chains.

Both players have shown a terrific tendency to penetrate both arcs too, particularly the forward 50, while hitting the scoreboard to good effect. Those added strings to their bows allow recruiters to see value in their versatility, given their size would often limit them to small forward or defender roles at the next level. But given the trail a player like Caleb Daniel has blazed, there is no reason why these two cannot follow a similar path.

There is no denying Gulden had an absolute blinder in our chosen game, and he has achieved similar feats all the way through his junior career. He is near-unstoppable at full flight and proved as much in his NAB League debut, racking up 33 touches and booting two goals as an absolute menace to the Devils’ defence. His six marks, numerous clearances, and breaches of either arc show the diversity of Gulden’s possessions and the utterly dominant hold he can have on games.

It seems the pair shared the similar trait of beating up on Tasmania in 2019, with one of Bowey’s standout performances also coming against the Devils. The Dragons won comfortably and had boasted a strong lineup, but Bowey managed to stamp his mark with a balanced game. His 22 disposals were one shy of his season-high effort of 23, and Bowey was remarkably consistent with his ball winning numbers. In this outing, Bowey tore up the outside while also pitching in at stoppages with his clean hands and burst away from congestion. A lone major was the cherry on top.

Given the similarities in their stature and best traits, there is obviously going to be a crossover in the pair’s listed strengths. Most notably, they do things at speed; with Bowey’s disposal execution, clean hands, and agile moves through traffic his best features, while Gulden racks up the ball and can hit targets others would not even attempt to, credit to his vision and crafty skills.

Obviously the testing justifies Bowey’s listings of speed, agility, and vertical leap, but Gulden’s agility and endurance are also up there with the best. Bowey’s decision making at full pace makes him a standout, while Gulden’s high footy IQ allows him to pull off the improbable and break the game open in a different way to your typically quick small.

It has already been noted that both players also work best on the outside, with Bowey owning the wings and able to hit targets off the flanks, while Gulden has a greater accumulative quality and work rate up the field to go with shrewd choices around goal. That ability to rack up big numbers is what sets Gulden apart, though Bowey’s bursting speed is also a highly desirable trait.

One of Bowey’s improvements comes straight from the man himself, telling Draft Central during preseason that he has been working on his finishing and goalkicking. That aside, working on his inside game would make him a more complete player, and he could well attend the centre bounces at Under 18 level with his ability to burst through congestion and break away from opponents in quick time. He is arguably more suited to transitioning to an inside role than Gulden, but lacks the size to do so at the next level even if he is also improving his repeat running ability.

Gulden faces the similar query of size at well under 180cm, though he obviously plays to his strengths and truly suits the role of a small. His inside game and contested work are areas which can grow, with much of Gulden’s game based around accumulating on the outside via handball receives, or finding space with his work rate. While Gulden can often pull off some remarkable plays, he sometimes bites off more than he can chew and would be better served playing the percentages. Though, you would not want to totally thwart his creative natural instincts.

Under 17 Futures All Stars
By: Peter Williams

One of Team Brown’s best players on the day with his run and neat kicking skills throughout. His day started with some great running power and vision to get the ball into the hands of Eddie Ford for an early goal, and then produced a lovely kick at full speed through the middle to Blake Coleman.

He used the ball well time and time again, winning a fair bit of it on the wing and half-back, but also setting up plays going forward, including a late game interception at half-forward and tight kick into Ford in the pocket. His hands in close and ability to find space, as well as his footy IQ is great. Even took a very nice high mark early in the fourth term and played on straight away to keep the ball moving.

Under 17 Futures All Stars
By: Peter Williams

His side’s best despite the loss, and the Sydney Swans fans would be pumped to see both him and Campbell playing well on the MCG. After a quieter first term by his standards often opposed to Ford at stoppages, he really got going and was crucial in getting his side back into the contest in the second term.

Kicked the easiest of goals over the back in the second term running into the square with space behind him, and looked composed in his movements in close. He sidesteps opponents with ease and gets his hands free time and time again, showing good core strength to stand up in tackles. Just a really clean player who when he gets going adds that touch of class to any side and is hard to stop.

This pair makes up two of a decent batch of sub-180cm prospects for the 2020 AFL draft who possess the skills and traits to break the barriers often put up by their size. Bowey’s athleticism, and speed in particular sets him apart from Gulden, though the Swans Academy member is more equipped in racking up high disposal counts on the back of his tank.

Bowey seems a more viable inside option given his athletic traits, though his value on the outside is high with that mix of speed and efficiency making him a damaging player going forward. His traits are easily transferrable to an attacking half-back flank, or crafty small forward role. Gulden looks so lively as a high half-forward due to his creativity, though you would not want to take the accumulation aspect out of his game. As a highly-touted junior, he will cost the Swans some decent value come draft time and he has already shown his aptitude at senior level with NEAFL experience under his belt.

>> CATCH UP ON PREVIOUS MATCHUPS