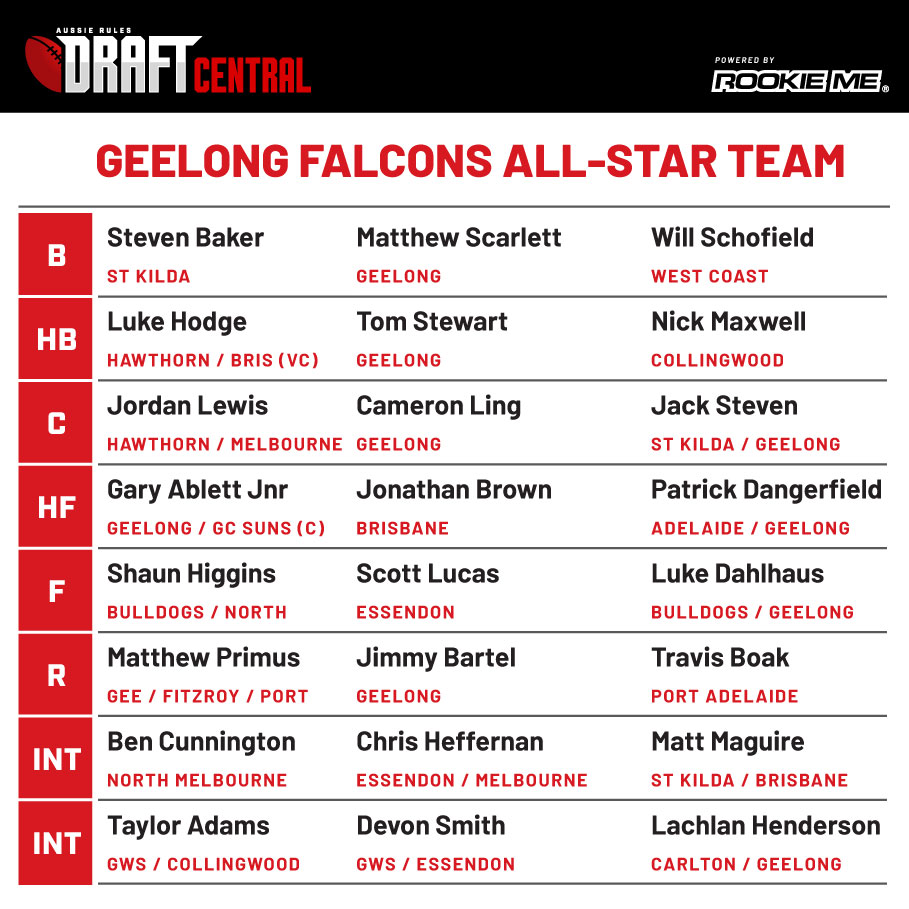 GEELONG FALCONS’ All-Star side is up there with the very best in the country. With stars across every line, the starting 22 features 15 players of whom have at least won a best and fairest or made the All-Australian team. In fact, only three players in the entire team do not have a personal accolade to their name, instead providing some height and depth for the squad.

The team itself is star-studded and it is hard to know where to begin. The fact the Falcons have such a strong onball group that the likes of captain Gary Ablett Jnr and Patrick Dangerfield can slide to half-forward flanks – and dominate – is saying something. They have some of the best bookends of the 21st century, and a variety of intercept players and dangerous goal sneaks. In summary, good luck beating this team.

The defence will be held down by one of, if not the greatest full-back of the past two decades in Matthew Scarlett. The Geelong legend earned six All-Australians and a best and fairest during his time to go with his three premierships. Holding down the other tall options are Tom Stewart and Will Schofield, who can both be very impressive offensively and defensively respectively.

Providing some defensive attributes and niggle is Steven Baker in the back pocket. He will be able to take over the negating of an opposition small forward, while Collingwood premiership captain and one-time All-Australian Nick Maxwell provides the loose intercept option. He will team up with another legend in the back six, with Luke Hodge also in the starting six thanks to a CV that includes three All-Australians, two best and fairests, two Norm Smiths and four premierships.

On the bench is Lachie Henderson and Matt Maguire, of whom both could play roles in defence, or Henderson could slot up forward as well.

There are elite midfields, and then there is this mind-boggling combination. We already mentioned the rotation of Ablett and Dangerfield off half-forward, and the fact Ben Cunnington, Chris Heffernan and Taylor Adams sit on the pine waiting for their chance says enough about the top-end quality this midfield produces.

On the wings, Jordan Lewis had a 319-game career, and while his accolades are not as high as others, he finished with an All-Australian and best and fairest, playing some of his best years during Hawthorn’s three-peat as part of winning four premierships. Accompanying him on the other wing is former St Kilda now Geelong talent, Jack Steven. While the 183-gamer has battled with injury of late, he has still won four best and fairests and was named in the All-Australian 40-man squad twice.

The half-forward line is hands down the best half-forward line across the board in these All-Star teams. While you might argue both Ablett and Dangerfield deserve to be playing midfield, it gives the team a better balance that two stars can sit at half-forward and potentially kick bags of goals whilst influencing the game. Between them they have 15 All-Australians, six MVPs, 10 best and fairests and three Brownlows – not half bad.

Both Shaun Higgins and Luke Dahlhaus provide some serious X-factor inside 50, with Higgins now up to 220 games and 220 goals, with two best and fairests and an All-Australian. Dahlhaus has 124 goals in 178 games, with a premiership and an All-Australian 40 nomination. On the bench, Devon Smith can come on in bursts and provide that physical pressure inside 50, winning a best and fairest with the Bombers in his debut season with the club.

With the exception in Stewart, we looked to those with more than 100 games to their names, and the likes of current players, Ed Curnow, Jasper Pittard, Allen Christensen, Gary Rohan, Lewis Taylor and Darcy Gardiner are all still on lists. From past players, Brent Moloney (166 games) has the most with Nathan Foley (154), Leigh Harding (141) and Amon Buchanan (134) the other two with more than 110 games. Looking much further ahead, James Worpel won a best and fairest in his second season with Hawthorn, so in a few years, expect him to be pushing into the side.