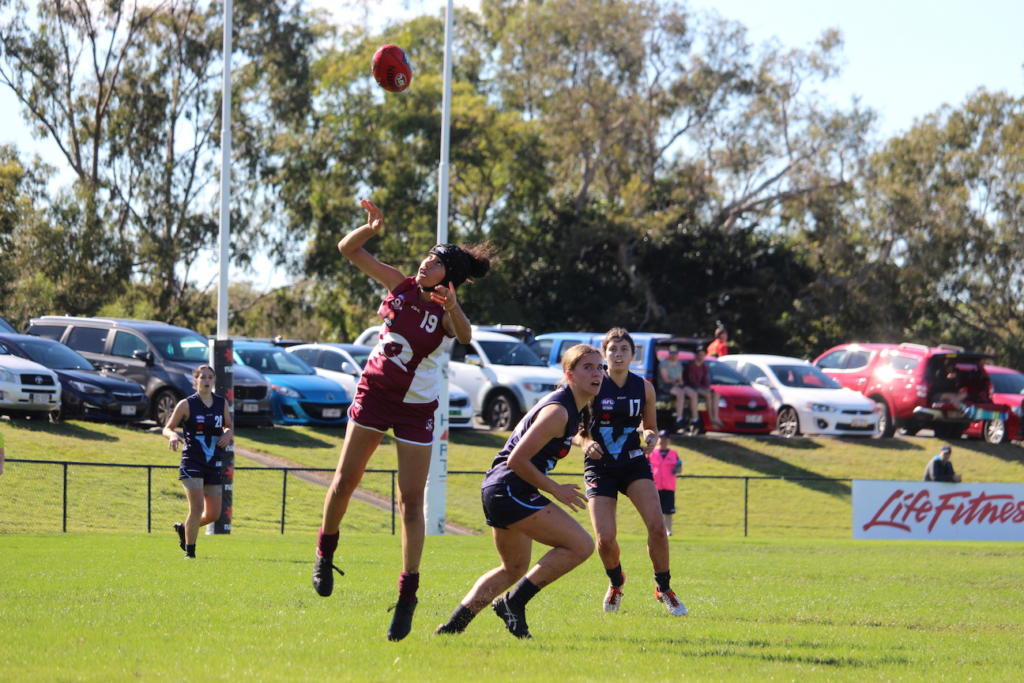 Next under the microscope is Brisbane Lions Academy high flyer, Zimmorlei Farquharson.

There are plenty of Australian rules players past and present who people proverbially say they would come to watch. Players that can do the unthinkable or those who just consistently look dangerous with ball-in-hand, and unpredictable to the opposition as to what happens next. These players often have athleticism or footy smarts that opposition players are wary of. That is exactly the case with Queensland forward, Zimmorlei Farquharson.

Ignore the stat line from last year’s AFL Women’s Under-18 Championships, because like so many excitement machines, statistics do not do justice to the impact that players can have on a match. Having already played multiple national championships, Farquharson has risen through the ranks and was identified as a special talent some years ago. Her aerial ability and defensive pressure is what catches the eye, but she just has that nous to do something special.

At 172cm, Farquharson is that in between height and has the skills that make her too athletic for the taller players, but strong enough in the air and at ground level to make her hard to match up on for the smaller players. So what makes her a match winner?

Rewind to the 2018 AFL Women’s Championships where Queensland was facing off against Vic Metro and a side that contained the likes of Madison Prespakis, Georgia Patrikios and Gabby Newton. The most unlikely situation found the Sunshine State going toe-for-toe with the undefeated Metro team for the most of the match. Queensland had never beaten Metro in a championships clash, but no one told Farquharson whose two last quarter goals – including a miracle from the boundary – helped her state to the most unlikeliest of wins.

Her 2018 championships campaign was a breakout tournament for her, and while her 2019 one might have been more inconsistent, she still showed the signs of being such a damaging prospect inside 50. She also displayed that she could play further up the ground if required, but more importantly, the fact that she was willing to get her hands dirty. Farquharson laid five tackles a game at the 2019 championships,

So just how athletic is the talented footballer? She clocked a 20m sprint time that was 0.09 seconds faster than anyone else, and an agility test time .30 faster than the next best. Both times were considered elite, and so when it comes to movement, she is among the very best.

If the AFL Women’s Under 18 Championships go ahead at some stage, Farquharson is one to watch as a highlight machine.