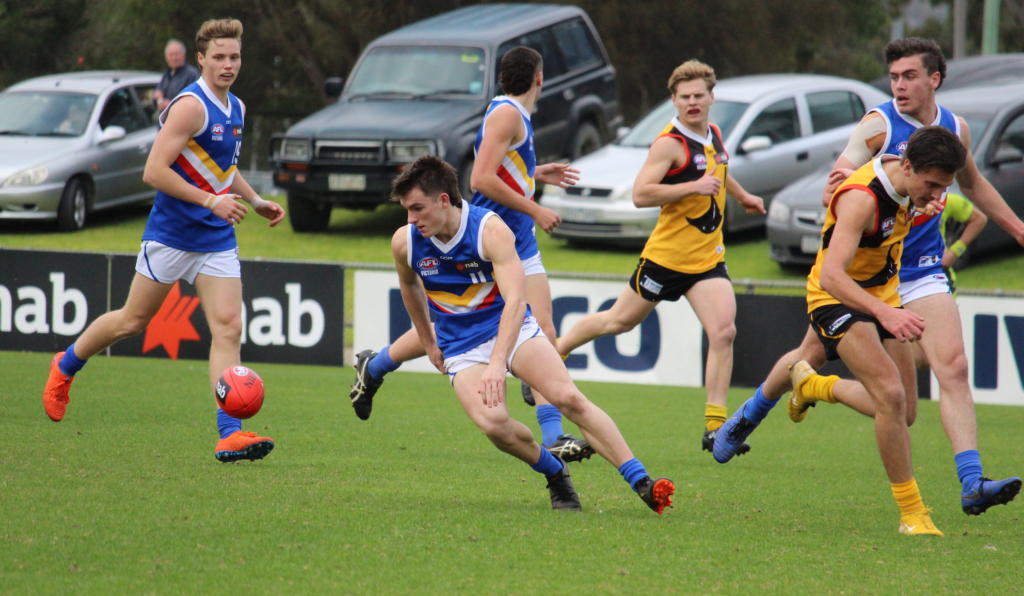 SIX fixtures were spilt evenly across Saturday and Sunday in Round 9 of 2019’s NAB League competition, with all bar one of the Victorian Metropolitan clubs picking up four points. Beneficiaries of that stat, Eastern and Sandringham jumped Gippsland to soar into the top three, but still trailed Dandenong by half a game. Six separate venues would also be utilised across the weekend in both Country and Metro regions.

The weekend’s action kicked off in typically tough Ballarat conditions as the Greater Western Victoria (GWV) Rebels hosted Tasmania at Mars Stadium. Both sides struggled for accuracy in front of goal, combining for 15.30 on the day, but the Devils effort of 10.16 would see them home comfortably to the tune of 32 points.

In terms of ball winning, the day belonged to Riley Polkinghorne, who racked up a game-high 39 disposals – 14 touches adrift from the next best effort, achieved by Tasmania’s Matt McGuiness and Oliver Davis. In front of goal, it was Jackson Callow who stole the show with four goals, double the tally of any other player afield.

A rare outing for Northern at Preston City Oval followed just after midday, but the Knights fell nine points short in their homecoming at the hands of Calder. An even start would soon be left behind by the Cannons, who shot away to a handy three-goal buffer at the main break and would hold on by a little over a goal in the end.

A pair of monster efforts in front of goal helped Oakleigh to a big win over Murray on the road, keeping touch with the top three in the process. The Chargers led all day, breaking the game open in the second and third terms to coast home 57-point winners.

Eastern’s run of form continued with another well-managed win, coming on home turf to the tune of 40 points against the struggling Geelong Falcons. The Ranges kept their opponents goalless in the second and fourth terms while adding three goals in each of those periods to make up much of the final margin in an efficient display.

Mitch Mellis‘ mammoth 39-disposal effort was massive for the winners, as teammate Zak Pretty also made his mark with 28 disposals and one goal, and diminutive forward Jonte Duffy booted a game-high three goals. Chas Karpala led Geelong for disposals with 24, followed by Sam Bourke (21) in a Falcons side stacked with 11 bottom-agers.

Western soared to a 42-point victory over Bendigo in Sunday’s second fixture, at another venue renowned for its tricky conditions, Williamstown Oval. It was all one-way traffic after the Pioneers snuck ahead by a goal at the main break, as the Jets piled on eight majors while keeping their opponents to just three behinds for the entire second half.

Samuel Clifford booted 4.1 from his seven disposals as the most effective forward afield, with two other Jets also bagging multiple goals. Morrish Medalist Lucas Rocci had the ball on a string from defence, collecting it 34 times, while Eddie Ford also impressed with his 22 touches. For Bendigo, Logan Fitzgerald saw it 29 times, followed by Sam Conforti (27) and Jack Evans (23).

Arguably the most high-level clash was left til last in Round 9, as Gippsland and Sandringham closed the show in Morwell. Despite boasting the home ground advantage and a half time lead, the Power were overrun by the Dragons, as the winners booted seven goals to three after the main break to ensure a 25-point triumph.

Kyle Yorke incredibly kicked half of his side’s goals as the only player to bag multiples, booting 5.2 from 19 disposals and nine marks. Lachlan Lamble, Jackson Voss, and Blake O’Leary all collected 27 touches to lead the way for Sandringham, while Leo Connolly and Jake Van Der Plight combined to do so for Gippsland with 20 disposals each.