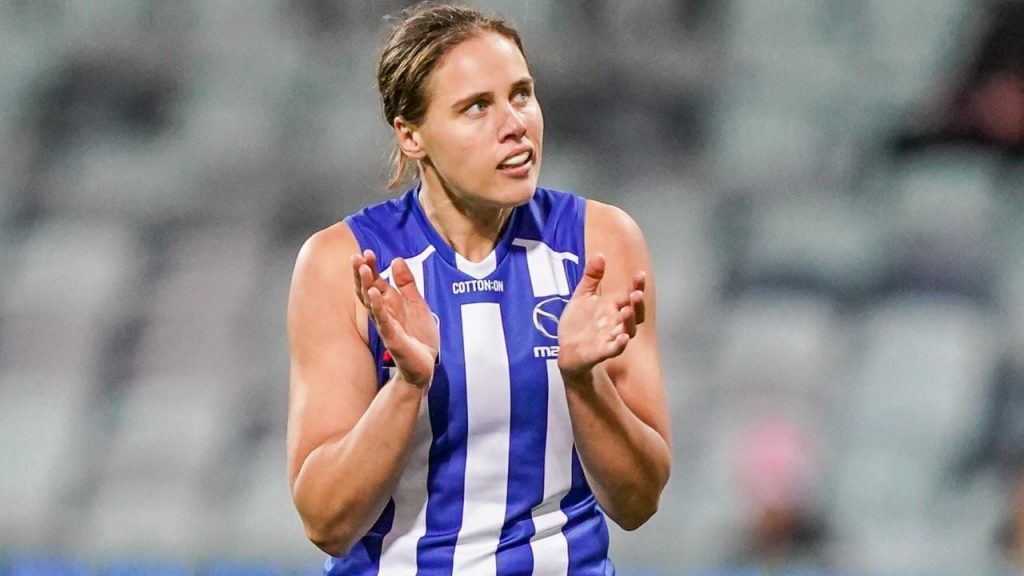 WITH the AFL Women’s 2020 season officially coming to a close now the awards are done and dusted, Draft Central looks back on our Top 50 Players of season 2020. This countdown purely looks at the 2020 season so does not look at past performances and will not include injured stars such Erin Phillips or Chelsea Randall.

In the final edition of the countdown and taking out the Draft Central Top 50 Players crown, it is no surprise that Jasmine Garner takes the cake after a formidable year in the blue and white stripes. The North Melbourne star had a phenomenal season winning the AFL Players’ Association most valuable player (MVP) award for her efforts while also being named in the All-Australian squad.

2020 proved to be the season of Jasmine Garner with the midfielder taking the competition by storm with her brute strength mixed with her finesse. She was simply unstoppable with ball in hand, able to hit a teammate lace-out time and time again and was a real barometer for the side. Garner was a key reason for the Kangaroos’ success throughout the season, guiding them through the challenging moments and most importantly standing up under pressure when it counted.

Constantly hungry for the footy, Garner’s eyes would almost light up when a contest was near, sniffing out the challenge and inserting herself in the battle, often winning the footy and disposing of it effortlessly. Garner was a real workhorse across the ground, not afraid to put her body on the line to win the pill, making her presence felt in every situation possible. Her general football understanding was second to none able to position cleverly to either elicit an attacking foray or drop back to help in defence.

Garner was constantly on the move and looking ahead to create the next play or be the link in transition, often resorting to her solid and sturdy kick to do the damage. She averaged an impressive 20.1 disposals per game credit to her high level of endurance and ability to stay on-ball for large amounts of time. Not only was she clever by foot but so too by hand, able to fire off a handball under pressure or flick it to a teammate in space showcasing not only skill but her spatial awareness.

There is no denying that Garner was a threat in all aspects able to hit the scoreboard with ease averaging a goal a game. She was incredibly crafty inside the forward 50 able to lead up at the footy and take a mark testament to her strong hands while also able to crumb off the ground and find her way to the big sticks. The North Melbourne star proved to be a handful for opposition teams often bursting out of the pack leaving them behind while she ran rampant across the ground.

Her chemistry with teammates Ash Riddell, Emma Kearney and Jenna Bruton also allowed Garner to play her game and help direct traffic whether it be in the middle or at a throw-in. The former Collingwood player has well and truly cemented herself as an integral cog in the Kangaroos outfit as shown in Round 5 where she blew Adelaide out of the water with her explosiveness. Garner shone true in that clash racking up an impressive 24 touches, seven marks and four tackles while nailing two majors to cap off what was a stellar performance by the Draft Central number one.