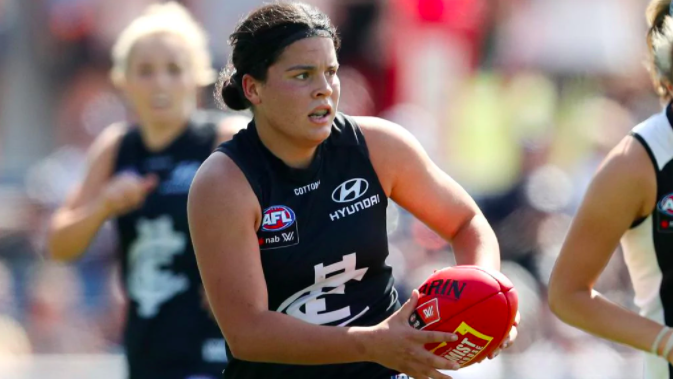 In this edition, we reveal the played ranked second for their efforts this year, a youngster who has already reached the highest heights in terms of individual honours despite completing just her second year in the competition.

Any guesses as to who will be number one?

This year’s AFL Women’s best and fairest comes in second on out list of the top 50 players, but there will undoubtedly be plenty of opportunity in future for her to take out the top spot. At this point – only two years into her career at the elite level – Prespakis has everything bar a premiership medal in her trophy cabinet as the leader of a new generation which seems to be in an unstoppable hurry.

The tough, diminutive midfielder is already as decorated a player as they come, earning back-to-back All Australian and club best and fairest honours, the 2019 Rising Star award, and now the ultimate league-wide recognition. She is a player who can turn games, carry her side on her back through sheer determination and the will to win.

It was evident as early as in Round 1 this season, as the young gun picked up right from where she left off in 2019. Against Richmond, Prespakis ripped the game apart in with a memorable third term to set the tone for the remainder of her campaign, combining her unmatched ability to find the ball with scoreboard impact. Prespakis loves a goal, if her celebrations did not make that abundantly clear enough.

The 19-year-old, who has taken tips off Carlton men’s star Patrick Cripps for dealing with opposition attention, continued to find plenty of the ball in 2020, leading her side in that department. She dipped below 20 disposals just twice, and racked up a high of 26 against St Kilda in Round 5.

Capping off her brilliant year, Prespakis would also finish top of the tree among her Blues teammates for contested possessions, clearances, inside 50s, and metres gained, showcasing the true damage she can inflict from the middle of the ground. Everything about Prespakis’ game is about getting her side going forward on the front foot, and she does it better than most.

Plenty of records will shatter and be made unattainable by this young champion of the game, who is just getting started. It will be scary to see the accolades she finishes up with should she continue on her projected path, and if she is not already the competition’s most valuable player, she is certainly Carlton’s.