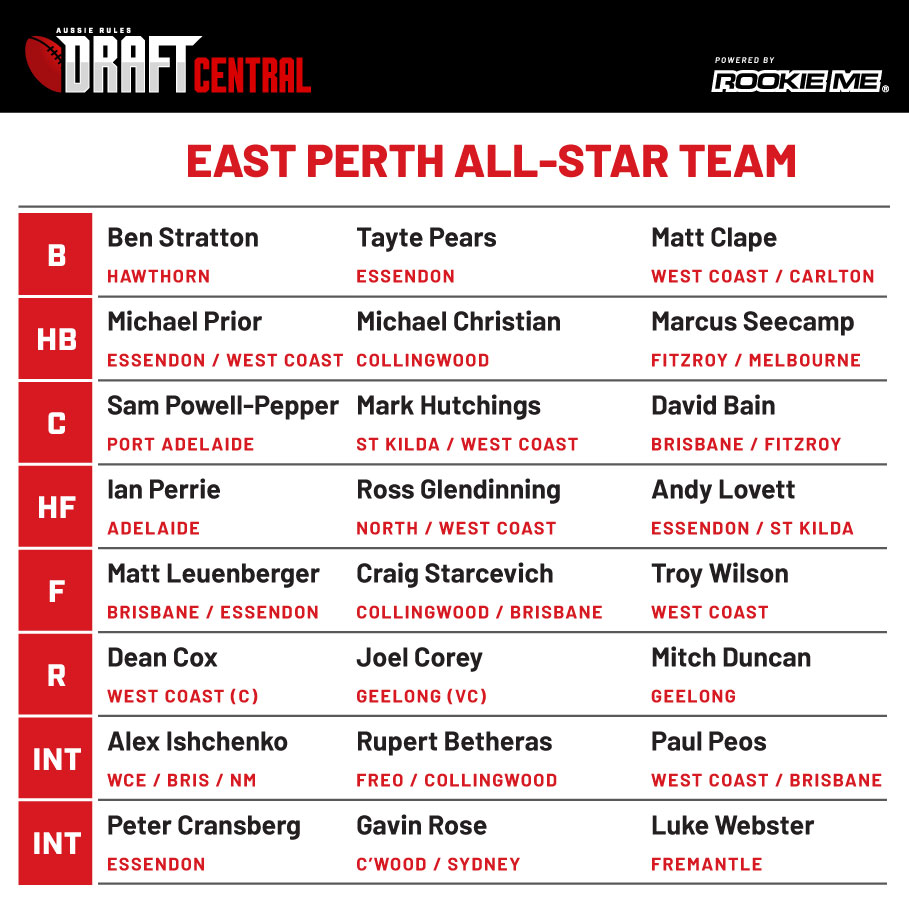 EAST Perth’s All-Star side does not necessarily have the depth of some others, but it has a good core of elite talents through the midfield, and very strong key position players. One of the greatest rucks of the modern era captains the side in Dean Cox after he won the All-Star Player voting via our Instagram stories this week. The Royals have a total of 12 100-game players and the remaining 12 in the best 24 are made up of those who played between 33-98 games. Luke Webster‘s 33 games is the lowest of any player in an All-Star side to-date.

Please note: The All-Star Team is only those players AFL achievements during the AFL Draft era. Therefore, legends such as Polly Farmer or Kevin Murray in East Perth’s case are not included.

Looking at the team on face value, it has an elite ruck, some terrific midfielders and a strong spine that would make it difficult to match-up on. Its abundance of talls, or medium-talls who could play as key position players mean it is top-heavy in terms of height, but would stretch any opposition defence.

The defence would be centred around 1990 premiership defender, Michael Christian. Standing at centre half-back, the former Magpie played 131 VFL/AFL games and was a tough opponent to beat in duels. Along with Hawthorn captain and three-time premiership talent, Ben Stratton, the duo provide some strong leadership in the back six. The other player to have played more than 100 games in the defence is Marcus Seecamp, who managed 140 games often playing off half-back or pushing up to a wing.

The other three players tip in at just under the century mark, with Essendon key position defender, Tayte Pears playing out of full-back, while 90-game Essendon defender Michael Prior sits at half-back. Matt Clape – 87 games, 62 goals – also makes it into the back six, though he also spent time in other areas of the ground, hence the 62 goals to-boot. Gavin Rose is a player on the bench who could provide some rotation through that back six if required.

The clear strongest point of the side, the midfield has some high quality midfielders led by Cox in the ruck. The West Coast Eagles star won a whopping six All-Australians, as well as a best and fairest in his time across 290 games. Joel Corey (276 games, two All-Australians, two best and fairests and three premierships) and Mitch Duncan (203 games, three premierships) hand the onball brigade plenty of success to drive the rest of the side.

Through the centre line is Eagles’ 2018 Grand Final hero and renowned tagger, Mark Hutchings to provide that defensive role, as well as the inexperienced but talented, Sam Powell-Pepper. Powell-Pepper’s 57 games is the second lowest of any starter in the side, but he adds value to the team. On the other wing is David Bain who played the 98 games and booted 48 goals, but won a best and fairest which earns him the gig over others around the same mark. Rupert Betheras, Paul Peos and Peter Cransberg could rotate through the midfield or forward to provide some extra depth in the area.

Gigantic. That is one way of putting it with five of the six starters either key position players or just about key position players. Aside from the talented Andy Lovett (88 games, 93 goals), the remainder of the team is considered talls or key position players, led by West Coast champion, Ross Glendinning. He is the centrepiece of the attack, booting 325 goals in 230 games, though he could also play as a key defender too. He won a Brownlow, two best and fairest’s and an All-Australian in his career. He lines up with Craig Starcevich, a Collingwood premiership player and now Brisbane Lions AFL Women’s coach. Starcevich booted 178 goals in 144 games during his career.

Filling out the other three spots are Adelaide’s Ian Perrie, Brisbane and Essendon’s Matthew Leuenberger and West Coast’s Troy Wilson. Leuenberger will play second ruck to Cox after the injury-prone talent managed 137 games during his career. He will share that load and resting forward with Alex Ishchenko (142 games). Wilson played just the 37 games – the least of any starter in an All-Star team so far – but booted 83 goals in that time. Perrie kicked 129 goals in 116 games with the Crows.

With each player about 30 games used for the team, the depth is not great, though the Royals had a further 10 players reach double-figure VFL/AFL games in their career during the AFL Draft era. Brady Anderson (27 games), Nick Kommer (22) and Stephen Hooper (22) are the next in line in terms of games, while the more recent Jackson Ramsay (17) and Jarrad Oakley-Nicholls (13) also hailed from the club.