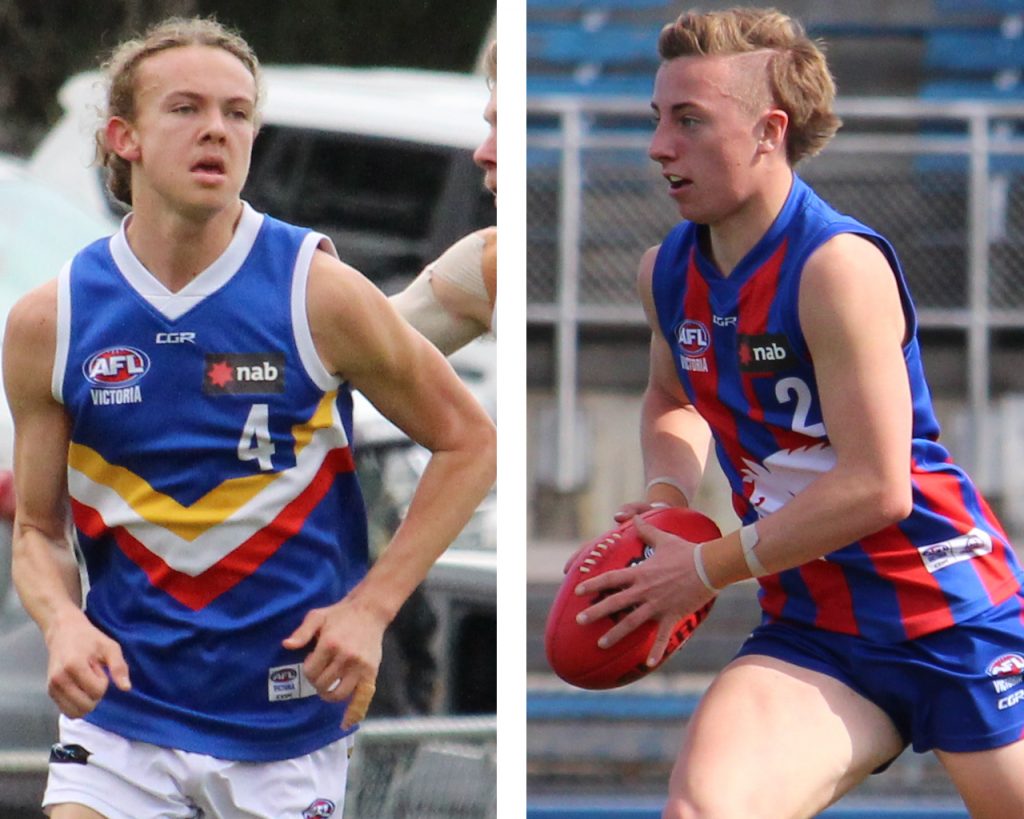 Our next matchup takes place on the outer, with flying flankers/wingmen Joshua Clarke (Eastern Ranges) and Bailey Laurie (Oakleigh Chargers) put under the spotlight. Of course, the pair will likely be teammates for Vic Metro should a national carnival go ahead, but have already faced off twice in the NAB League – including in the grand final, no less. Both were prominent as bottom-agers in the 2019 season decider, with Clarke assuming his usual role off half-back, while Laurie ran riot at half-forward.

Clarke’s 18 underage games are testament to his ability, as he quickly became a key member of the highly successful Eastern side credit to his damaging work moving forward from the back. Laurie managed seven outings in Oakleigh’s premiership side last year, mixing his time between Chargers duties and APS school football at Caulfield Grammar. A popular teammate, Laurie ranks as elite for his agility and is a livewire in the forward half who harnesses his phenomenal creativity.

Inevitably, it is impossible to compare testing results from the two athletes given only one of them tested this year, however, Clarke did participate in 2019 to give us some data to work with. The pair ranks very highly in agility, with Laurie’s sub-eight second effort landing him in the competition’s top 10. Speed is the area which seems to set the two apart, though Clarke’s 20m time of 3.10 seconds in 2019 is far from flattering to the pace he is able to build at full flight.

The pair fared similarly in terms of endurance albeit if the score are a touch low, and Clarke’s preseason injury interruptions would have made building on the 20.4 score difficult. As smaller players, their power and explosiveness seems to lack in the jumping tests, though they may rarely need to compete in the air given their nous at ground level.

Obviously it is difficult to compare the figures of two players who have very different appearance numbers, but a factor that is somewhat alleviated given they occurred in the same competition.

Something that is immediately evident across both stat-lines is the uncontested possession rates, with both athletes rating at above 63 per cent. For Laurie in particular, it displays his knack of finding space and getting busy on the outside, and his average of 3.1 marks is credit to his leap and ability to find space.

The rebound and inside-50 numbers for both player are also solid, but stand out more glaringly for Clarke given half-backs typically rack up more rebounds. His greater average of inside 50s highlights his ability to break the lines coming out of defence as a real metres-gained asset, getting on the end of handball receives and putting the ball into goal-threatening areas.

That aspect of Clarke’s game means he is also able to find the goals from further afield, while Laurie is seldom far away from the big sticks either and can create chances from nothing. Having put up solid numbers as bottom-agers, it would have been great to see more of their development in 2020.

While there may well have been other appearances right in the mix to be chosen for either player, we feel they best showcased their most significant traits in these games.

Coincidentally, Laurie’s chosen best game is also the pair’s previous meeting, beating out his season-high 19 disposals against Calder, and one of his other two-goal efforts – Round 19 against Gippsland. On the biggest of stages, the elusive forward took the game by storm, setting the base for Oakleigh’s triumph with some eye-catching moments early on. Laurie crucially found the goals, but also brought others into the contest and broke it open with his ability to burst out of congestion.

Clarke also had a good batch of games to choose from, but his 21 disposals and one goal up in Queensland against the Lions Academy was a memorable one. We could well have opted for his 22 disposals and one goal in the grand final, or four other showings of over 20 touches across his 18 games. Against the Lions, Clarke had a similarly profound impact and kicked a crucial goal on the run to lift his side in the tight contest. That is somewhat a trademark of Clarke, as is his ability to penetrate either arc. It was all on show in this game, a top effort.

You already know about Laurie’s efforts in the grand final given we judged it as his best game, but Clarke was also one of his side’s best players in a losing effort. He managed to collect his second-best disposal tally for the year (22), while also finding the scoreboard in typical fashion on the run from range, and providing plenty of rebound from defensive 50. Clarke’s two clearances and weight of rebound 50s reflect how much pressure the Ranges defence was under, which he held up well in, however tallies of zero marks and tackles reflect Clarke’s reliance on the uncontested and attacking game.

The speed-versus-agility battle comes to the fore in either players’ strengths, with Laurie obviously excelling with sideways movement, while Clarke is able to hit the gas moving forward. Laurie’s evasion can be particularly eye-catching, with his ability to side-step and sneak into improbable pockets of space nothing short of elite.

Finding space also transfers to how busy Laurie gets, proving a pest to opposition defenders as a slippery customer. His creativity with ball in hand also works to break games open, able to hit short-range targets with good vision and execution to thus give him the added – and highly desirable – trait of having a high impact per possession.

Clarke’s best assets all tie into one another, with his speed, carries, and kick penetration essential to any rebounding half-back/wingman. He can prove equally evasive in congestion and once he breaks free, good luck catching him. Clarke is not afraid to carry the ball forward, but also gains serious meterage with his sweet left-foot kicks. Accustomed to booting goals from range, Clarke is a multi-faceted threat in a typically one-dimensional position.

Laurie’s listed improvement of contested ball is a difficult one to attribute, as he is quite good at weaving through congestion but tended to find more of the ball on the outside or in space up forward. Given his clear ability to move into the centre bounces, Laurie can also work on having a more consistent impact throughout the four quarters, while also accumulating bigger numbers. That aspect was evident even in his best game, where he was electric early but faded away in the latter stages. It may be a product of his forward role in 2019, but can always be worked on.

For Clarke, contested ball is also listed as an improvement given his largely outside game and uncontested possession rate of 68.7 per cent. It ties into the need to improve his defensive game, which Clarke alluded to in preseason himself, adding the defensive attributes to match that attacking flair off the half-back line. A key indicator of improvement will be building on his 2019 tackle average of 1.5, with defensive pressure an in-vogue and required trait for structures at the AFL level.

In what turned out to be a dirty day for Eastern, a shining light was the game from young dashing defender Joshua Clarke, who did everything he could to get his team over the line with his dash and dare from the back half. Clarke had some eye-catching moments, using his speed to take the game on and get away from any would-be tacklers. He had a huge second quarter highlighted by a fantastic goal on the run on a hard angle and distance while also under pressure.

The two may be a touch separate in terms of draft range at this point, with Laurie’s agility, damage, and game-breaking abilities forward of centre making him a desirable option. That should not detract from Clarke’s impressive resume and range of traits, though half-backs and outside types are often put into the dime-a-dozen category. But Clarke’s speed and the improvements that can come from his game are exciting, and he can be just as much of a game changer. The pair would make for a dangerous combination up either end in the Metro side, would have again met in the NAB League this year. Laurie may be set for more midfield time, at 178cm, his best position at the next level with likely be up forward. If both players can harness the contested game sharpen their overall games, they will have little trouble in finding a place at the elite level.

>> READ MORE ON CLARKE AND LAURIE

>> CATCH UP ON PREVIOUS MATCHUPS