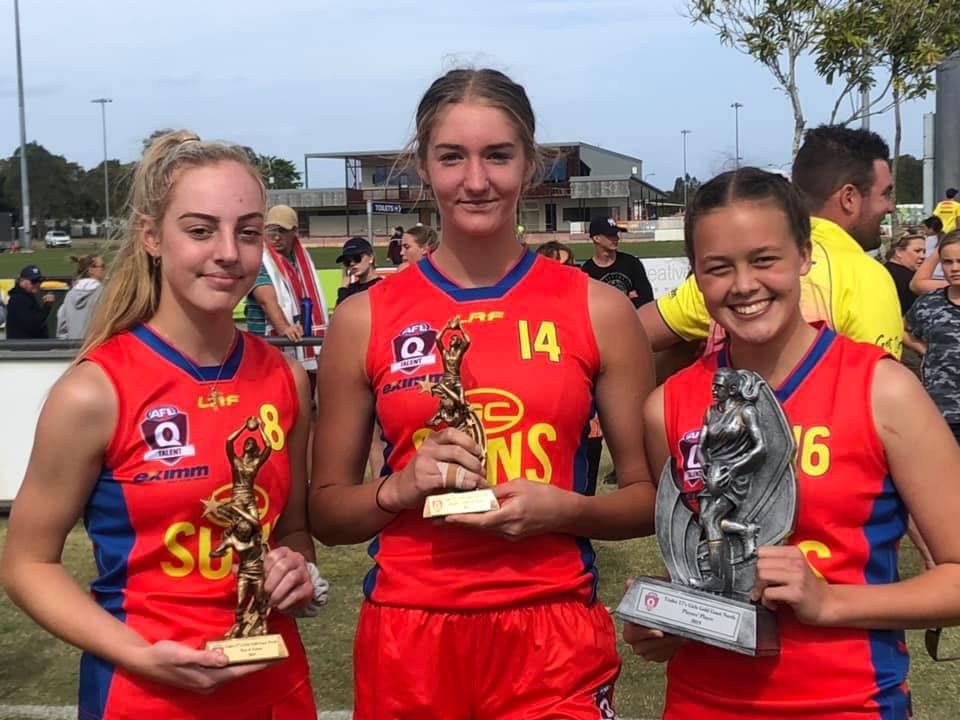 AS the postponement of all seasons commenced over the last week, we head back to the pre-season where we chatted to a number of athletes across the country. In a special Question and Answer (Q&A) feature, Draft Central‘s Taylah Melki chatted with Queensland’s Lilly Pearce at the state testing day hosted by Rookie Me.

Pearce hails from a high-level athletics background, and initially came into football as a means to get fit upon recovering from a back injury. The top-ager has not looked back since and is now part of the Gold Coast SUNS Academy having played just two full seasons of Australian rules football. An athlete who thrives on being busy, Pearce certainly has a lot on her plate in 2020; juggling academy commitments, club football, and her Year 12 studies.

TM: Lilly, how did you get into footy?

LP: “I did athletics for 10 years and I got a back injury. So I was off for about two years and then I joined up at my local (Australian rules football) club to get fit because there’s heaps of running involved. I haven’t gone back to athletics since.”

What kind of events were you doing in athletics?

“I’ve competed at nationals since I was 10. It’s just an amazing experience, just getting to that level and making new friends from different states, I think that’s really amazing. It’s really shaped a lot of who I am today, I believe. Obviously travelling with my mum, it’s been great, I loved doing athletics.”

Have you been able to transfer some of the skills required in athletics to football?

“Athletics is an individual sport and it’s such a different atmosphere to football. It’s like training seven events individually and it’s so structured; you go to training, you know you’re there to do your training, then you leave and you rest and train the next day. I live and breathe spot, I feel like any rest day is just a step back… I love keeping busy so that’s good.”

How have you found being part of the Gold Coast SUNS Academy?

“I’m in year 12 this year and thinking about it stresses me out because I have academy three times a week, club two times a week, gym every other day, and gamedays on Sunday. And I have a job. So I feel like every single day of the week I go from one (to the other) and it takes me an hour and 10 minutes to get to training. It’s kind of full-on but I know what I’ve got to do and I’m keen for it to become a routine. I think that’s going to be exciting.”

How do you manage it all and the stress involved?

“I couldn’t tell you. I think I just forget about it when I’m on the field or in the gym. I thrive off keeping busy and I feel like I’ll come home and I’ll do my homework and if I keep up to date with everything, then I’ll be fine.”

Are there any particular areas you’re looking to improve on?

“I’d like to be better at marking. I broke my finger in my first season and it’s been on my mind. I haven’t gotten past it.”

How’s the injury now, did you recover well?

“I had surgery on it and was off for the whole first season – I did it in the second game. So it’s my third year of (football) but my second season. But yeah, I think it’s just a mental barrier that I think I need to overcome and hopefully I can do that this year.”

On the flip-side, what do you see as some of your strengths?

“Probably general fitness. Coming from an athletics background and obviously I train every day, I feel comfortable with how I am in the fitness area. Obviously there’s always room to improve but I don’t struggle as much as I could.”

You mentioned before that your mum was a big part of your athletics life, has that been the same with football?

“Definitely. She’s the one who pushes me and if I feel like I can’t do it, she’ll make me do it, then I feel accomplished afterwards. She’s been an amazing role model for me.”

Are there any other role models you look up to at the moment?

“I think there are some amazing influencers. Not really any that I really aspire to be like, I think it’s all about making a name for yourself and having your own brand. I think that definitely other people do influence that.”