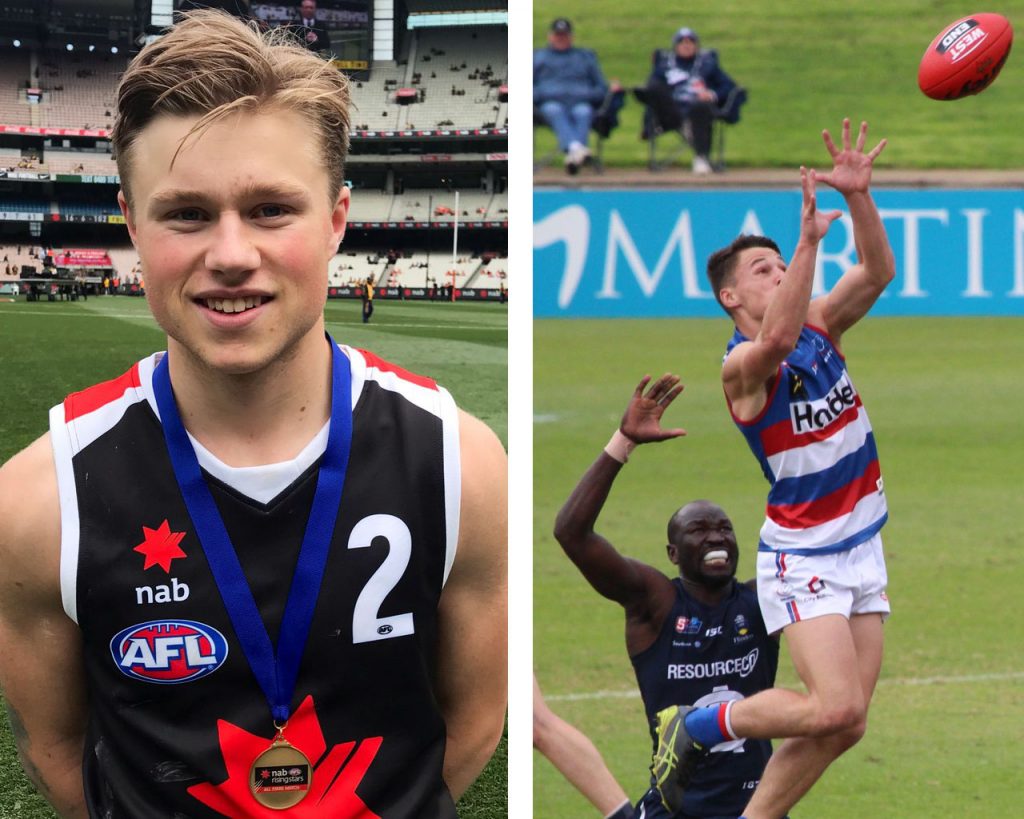 Our next matchup features two small midfielder/forwards who have already faced-off twice in representative colours. The two in question are of course Sydney Swans Academy product Braeden Campbell, and Central District’s Corey Durdin, who both featured prominently in last year’s Under 17 All Star showcase, after also clashing during the 2019 Under 18 National Championships. Both are smaller than the modern day midfielder but pack a punch, possessing a number of traits which more than make up for the size difference.

Campbell, who earned best afield honours in the All Star clash, is the Swans’ leading academy prospect for 2020 having already played thrice for the Allies and featured four times during the NAB League Northern Academies series. His pace to break the lines and penetrating left boot caught the eye on numerous occasions over the last two seasons, while his ability to play both inside and outside is also desirable.

South Australian Durdin has long been a highly-touted prospect too, especially after earning the Kevin Sheehan Medal as Under 16 Division 1 MVP in 2018. The diminutive inside type has also spent a lot of time inside forward 50, and fared well there in his three-game spell at SANFL League level for the Bulldogs. His combination of toughness and smarts makes him a reliable figure in any side he runs out for.

The sum of who comes out on top in the testing results only provides a dead heat; with Campbell winning out for speed and agility, while Durdin edged the standing and running jumps, and the two both managed 20.6 in the endurance test.

The data plays into the slightly different methods of either player though, with Campbell’s speed and agility allowing him to burst away from or weave around opponents in congestion, while Durdin tends to use his strength a touch more at the junior level with slightly more power in the short, explosive movements. The South Australian’s footy smarts are also a key asset, something which is immeasurable here.

Campbell ranked very highly in the 20m sprint across the nation, with his agility score also quite impressive. The pair also fared well in the jumps, showcasing that fast-twitch power they possess, and the ability to compete at all levels despite a size gap at times.

It is always great when you can garner statistics of a similar sample size and level, which is often difficult when comparing prospects from different states. While Durdin did have experience at senior levels, it would be far more fair and scientific to compare his Under 18 efforts against that of Campbell, particularly given their respective roles were more consistent.

Playing an inside/outside mix through midfield and off the half-forward flank, Campbell proved his proficiency and penetration in breaking the lines during the Academy Series. His ability to get the ball forward either through carries or booting it long shows in his inside 50 rate, while a two-goal-per-game ratio also bodes well for a forward role – which is perhaps where Campbell will get a start at the next level.

Durdin played predominantly through the midfield as an inside ball winner at SANFL Under 18 level, dominating the clearances while also spreading well to impact around the ground. He even beat out Campbell in terms of inside 50s, but lagged in terms of scoreboard impact given his limited time forward of centre.

That factor almost took a full 180 during the national carnival, as Durdin featured primarily as a ground level small forward, thriving with his forward pressure and smarts around goal. His disposal output was slashed heavily though, something which Campbell managed to keep relatively consistent. Campbell’s role was largely on the outside for the Allies, using his run to gain metres and penetrate either arc.

The stats may not necessarily flatter on either side here, but context and impact is what justifies these games as the best. Campbell’s 13 disposals and four goals as a bottom-ager came in a home win against the highly-fancied, albeit undermanned Sandringham Dragons. Up against the likes of Archie Perkins and Darby Hipwell, Campbell excelled with his trademark forward movement and lethal finishing.

Durdin’s feat is made more remarkable given it came at the top level of South Australian football, and it provides a glimpse into what role the diminutive prospect will play in future. As that permanent small forward, Durdin managed to create five shots on goal, booting three from his 12 disposals. The figure of just one tackle does not do justice to his usual work rate, though he may continue to feature deep within the arc.

This was not necessarily the best showing from either player, but they were still both able to show glimpses of their usual selves. Both maintained a 50 per cent contested possession rate despite seeing less of the ball, and returned similar outputs across the board. Though Durdin finished with less disposals, he fared well on the defensive end, while Campbell had typically impactful touches on the outside.

The two may not find themselves directly opposed to one another, but are capable of producing similar impact.

While these two hold many similarities, the differences in their games come to the fore when pin-pointing their respective strengths. Campbell’s ability to work the outside is credit to his speed and willingness to carry the ball, which is often finished off with a damaging kick forward. He may not possess the ball winning capabilities of Durdin, but arguably has a greater impact with each of his touches, getting into dangerous areas or contributing to the scoreboard.

Durdin is much more of a natural footballer, with his football IQ up forward and pure knack for finding the ball while in midfield key strengths. The South Australian’s toughness has also allowed him to thrive as an inside midfielder, while doubling to aid his transition into senior football. Durdin’s versatility is another asset listed her, with his top skills transferrable to a position different to what he will likely be utilised in at the next level.

While speed is an area of strength for Campbell, it looks like an area for improvement for Durdin. His 3.15-second 20 metre sprint time is sub-par for a prospect who will look to push his case as a small forward, while his size is a factor which limits him from being able to continue as a pure inside midfielder. It must be said though, Durdin’s preseason time is not entirely indicative of his usual burst on-field.

In a similar vein, Durdin’s strength in finding the ball is something Campbell can work on. While he is capable of breaching the 20-disposal mark, he often hovers in the teens and hardly gets into the 30-realm. Improving in these areas would merely help these prospects become more complete players, but should not detract from their relatively well-rounded games.

Deservingly Best on Ground and it was easy to see why. He rarely wasted it and his left foot was a treat. On a day where the skill level was hit and miss, Campbell seemed to turn everything he touched to gold with his three majors from 14 disposals. The Sydney Swans Academy member had a couple of early touches then got his team on the board running out of a stoppage and launching from 40m on the left to sail it home. He kicked a second early in the third with a lovely left foot snap on the boundary, then made it two in a short space of time with a ripping goal from 55m on the run. At times he did a bit too much, such as being pinged for holding the ball by Henry Walsh in the second term, but his dare and run was something to admire and by taking on the game, he set up scoring opportunities to Reef McInnes and Joel Jeffrey late in the game, and even had a chance himself with a snap which bounced towards goal but was kept in, only for teammates to finish off the job with a major.

The pocket rocket had some highlight plays to suggest he can be a damaging player when he is on, and generally used it pretty well despite not racking up a heap of it. He has that great burst of speed that can burn off opponents and showed it early running down the middle but unfortunately only had a one-on-three option to kick to, which he did pretty well to put it to his teammate’s advantage to at least nullify the contest. He almost kicked a dribbler goal late in the first term but just missed, then made up for it with a great outside-of-the-boot goal two minutes into the second term. Was quieter in the second half as Team Brown controlled possession in the front half, but the forward still had a lovely straight kick down the middle, and had a scoring chance in the final term but it hit the woodwork.

Campbell – Testing analysis: which state is the fastest?
Durdin – Get to know: Central District Under 18s