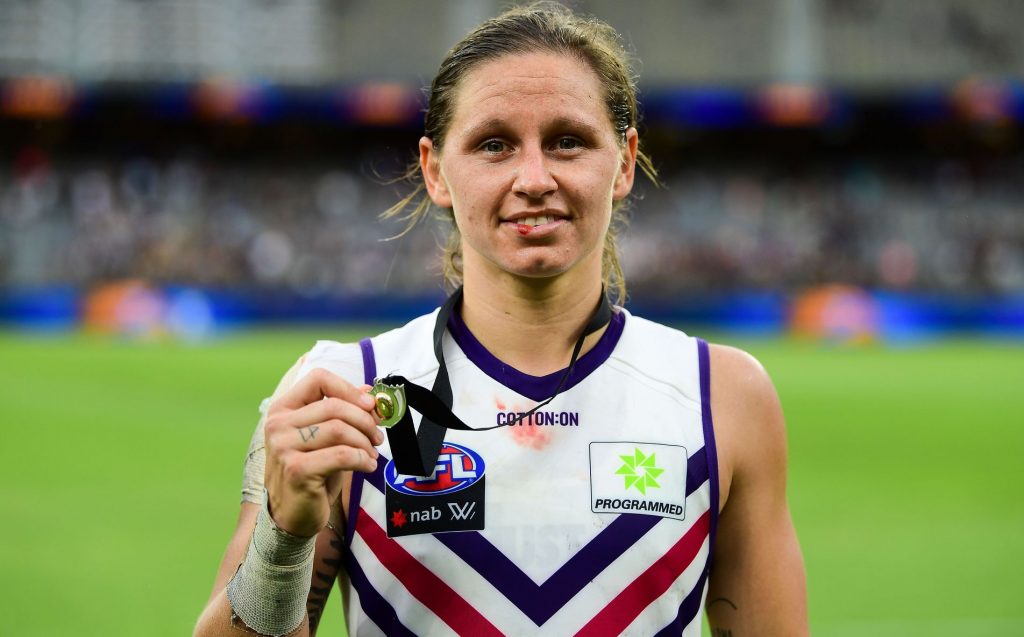 In this edition, we look at number five in the rankings and someone who can only be described as an absolute tackling machine.

While Ebony Marinoff famously became known as the tackling machine at AFL Women’s level, a contemporary in Bowers – who is actually seven years Marinoff’s senior – has proven to be the undisputed champion in that regard. The sheer fact she not only took her game to another level in 2020, but lifted her remarkable tackle average is credit to the Fremantle star’s determination to get better each and every week.

Bowers was rarely fazed by bigger opposition, averaging a mind-boggling 14.1 tackles per game and falling one tackle short of a century in just seven games. Just when many fans thought 11.1 tackles per game in 2019 was off the chart, Bowers lifted it again. She thrives on the contested ball and is the ultimate team player, but really shone as a better offensive weapon in 2020 despite only kicking the one goal – having more inside 50s and average disposals.

Bowers hardly had a quiet game, and certainly not defensively with her lowest tackle count coming in at 12. Twice, Bowers actually laid more tackles than won disposals which signifies the importance she places on doing all the team things first. While there were multiple games one could argue as her best, Bowers’ ability to stand up in the semi-final against Gold Coast Suns and record 22 disposals, six marks, three inside 50s, two rebounds and 14 tackles in the Dockers’ huge win was memorable for the occasion.

Now a back-to-back All-Australian and already a club best and fairest winner, Bowers’ past two seasons have been up there with the best in the league and it is shown with a top five finish here. She also wrote herself into the record books by winning the inaugural Derby Medal in the Dockers’ win over West Coast early in the season.  Having turned 28 last November, Bowers is far from a veteran and still has a number of seasons left to continue her elite defensive pressure and maybe even catch Marinoff in the tackling stakes.