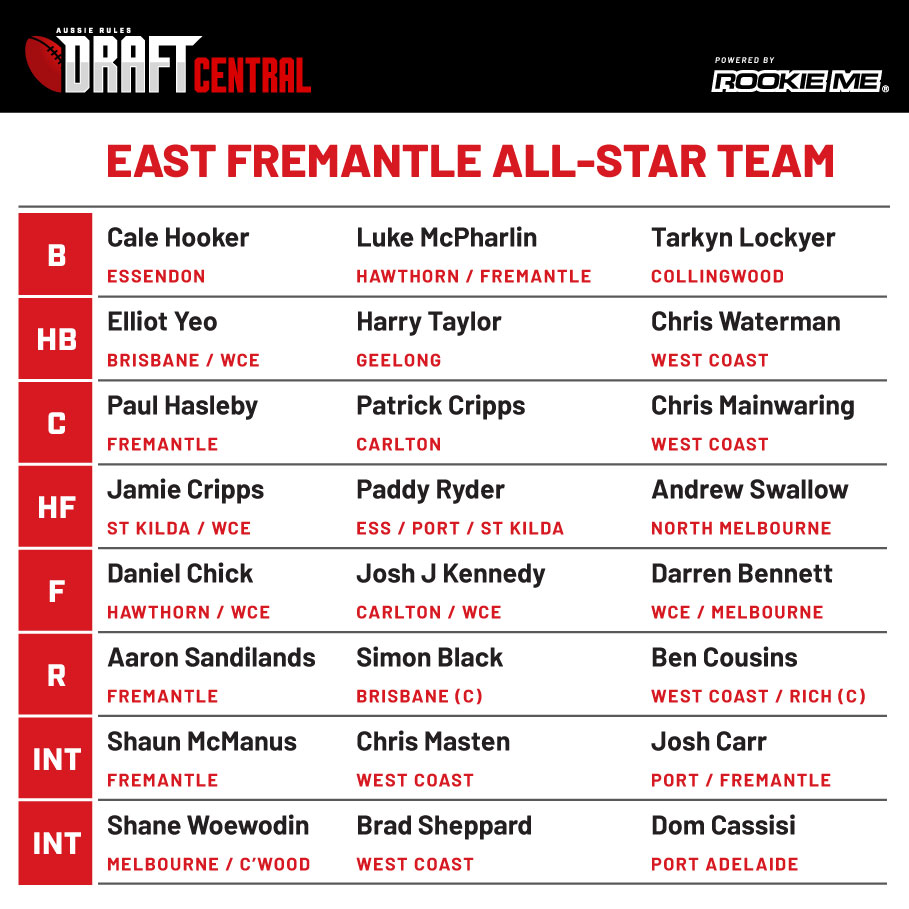 EAST Fremantle’s All-Star side is arguably the greatest of the teams thus far, with a ridiculous amount of talent. With Ben Cousins and Simon Black voted the Best Players of the AFL Era (the voting was tight at the time of publishing), they lead a side featuring a whopping 17 – yes seventeen – 200-game players. Throw in another 21 100-game players and it’s fair to say the Sharks’ program has produced some absolute elites of the game.

I mean there’s not much not to love about this team with depth across every line, and while you might have to get creative with the small-medium forwards, they still have them. Every other line is nothing short of elite, and if this team was able to run out on the park, good luck stopping them. It is hard to pinpoint a weakness, but of all their strengths, their onball brigade is elite, deep and well-balanced.

Starting with the defence, you have a couple of 250-game key defenders in Harry Taylor and Luke McPharlin. With three All-Australians and five All-Australian squad nods between them – as well as some time up forward, this duo would be incredibly hard to score against. Cale Hooker provide a third tall option down there too, and while he might not have the accolades of the other two, he has a best and fairest to go with an All-Australian selection.

In terms of the smaller options, Tarkyn Lockyer and Chris Waterman were as reliable as they come, with Elliot Yeo providing the flare. He could also roam through the midfield very easily, but the strength of the onball brigade has pushed the two-time All-Australian and best and fairest winner out to half-back. Brad Sheppard is a player on the bench who could play a defensive role, as could Shaun McManus who could be another option through the midfield.

How about an onball trio with two Brownlows, 11 All-Australians, 10 best and fairests, a Norm Smith, Rising Star, MVP award and four premierships between them? That is exactly what the three lining up at centre bounces possess. Black, Cousins and Patrick Cripps would be a mouth-watering onball group for any coach, and that is before you look at the depth to provide them with support. The ruck? None other than Fremantle giant, Aaron Sandilands who behind Dean Cox was the best ruck of the first decade in the millennium with four All-Australians and two best and fairests.

As already mentioned, Yeo, McManus and Sheppard could rotate through there, but the starting wings are Eagles star, Chris Mainwaring and Fremantle talent, Paul Hasleby, who again share in three All-Australians, and 409 games of AFL action. Andrew Swallow has won three best and fairests and he has to slide onto a half-forward flank such is the talent amongst the group.

With Chris Masten, Josh Carr and Dom Cassisi on the bench, this midfield bats really deep. Oh, and there is a Brownlow Medallist on the pine in Shane Woewodin. He might be much maligned, but you do not win a Brownlow without talent, so the rotations through the middle would be unstoppable for the opposition sides facing this team.

The forward line might not have the amazing accolades of the other two areas, but with former Carlton and now West Coast sharpshooter, Josh J Kennedy at full-forward, the team will have no problems booting a big score. Imagine the three-time All-Australian and two-time Coleman Medallist leading out to the midfield group in this side – Fred Fanning‘s all-time record in a game might be on shaky ground.

The other key tall is Paddy Ryder who while he has had injury concerns at times, is still an All-Australian and best and fairest winner. Along with Swallow at half-forward is Jamie Cripps who has booted 211 goals in 163 games to be third overall – and soon to be second – behind Kennedy and Daniel Chick in this team.

Chick finds himself in the forward pocket even though realistically he would play further up the field, but his 216 goals in 252 games make him a perfect player inside 50. Rounding out the forward line is Darren Bennett who has played the least games of everyone by some way – just 78 in fact. Why has a 78-gamer made it in over some 150+ gamers? He booted 215 goals in the late 80s, at 2.8 goals per game.

If we mentioned every single player that was unlucky to make this team, we would be here all day. There are 38 players with more than 100 games, and even the majority of them are either well over 100 games, or still playing to add to their numbers. If we are talking past players, then the two most unlucky have to be Peter Wilson and Jonathan Hay who ran out in 171 and 157 games each, earning All-Australian honours once.

Michael Brennan (179 games), Garrick Ibbotson (177) and Matthew Carr (162) are the other three players to play more than 150 games and narrowly miss out. Of the new crop coming through, David Swallow and Jason Johannisen could well make this side by the end of their careers, while if we are talking the last few years, then Cameron Zurhaar has started promisingly, and of course there are the five players plucked out in last year’s AFL National Draft that Sharks fans will be keen to see develop over time.

Note: Daniel Kerr should have been included in the team, and was an oversight due to not being on the Draft Guru site. When it comes to Team-by-Team voting, Kerr will be included.