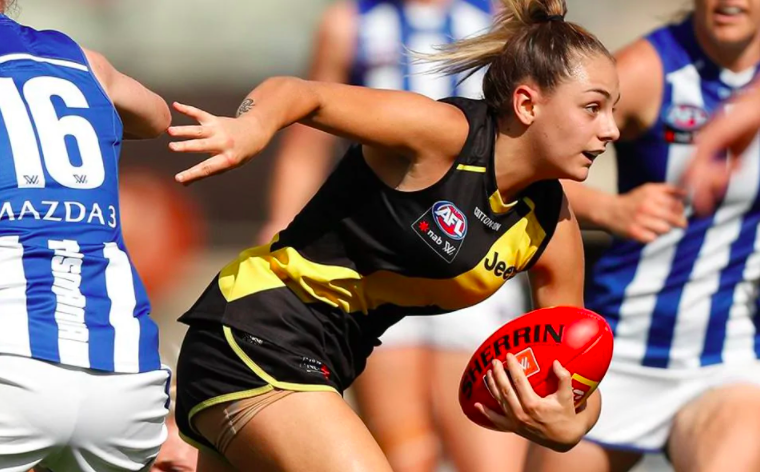 In this edition, we continue the journey towards our top five with another prized draftee who has quickly broken into the elite ranks.

Richmond’s winless inaugural AFL Women’s season may not have gone to plan, but the continual emergence of one of its marquee recruits, Conti gave Tigers fans something to smile about by is end. The zippy midfielder made a permanent move into the centre bounces and quickly became her side’s prime ball winner, proving she has a lot more than her patented run on the outside.

At just 20 years of age, Conti took up the responsibility of leading her side through action, as skipper and fellow former Bulldog, Katie Brennan went down with concussion in Round 4. The 165cm jet’s durability and toughness shone through significantly in those times as she posted season-best numbers in the final month despite being the primary target for opposition attention.

Expectations were high on Conti after she crossed from the Bulldogs for pick one, boasting a best afield medal in her former side’s 2018 premiership team, a best and fairest award, and All-Australian honours. But having also taken out Richmond’s VFLW best and fairest in 2019, there was little doubt about how she would fare in the yellow and black at the elite level.

Conti led her new side for disposals, contested possessions, clearances, and inside 50s in 2020, helping her become the sole Richmond representative in the All Australian squad. While she failed to make the final cut on this occasion, she was undoubtedly one of the unlucky few to be squeezed out due to the competition’s wealth of midfield stars.

Just three years into her career, Conti remains on the incline having entered the grade as a coveted junior and overall athlete given her prowess in other sports. She will inevitably be the face of Richmond’s attempt to capture premiership points for the first time in its next campaign.