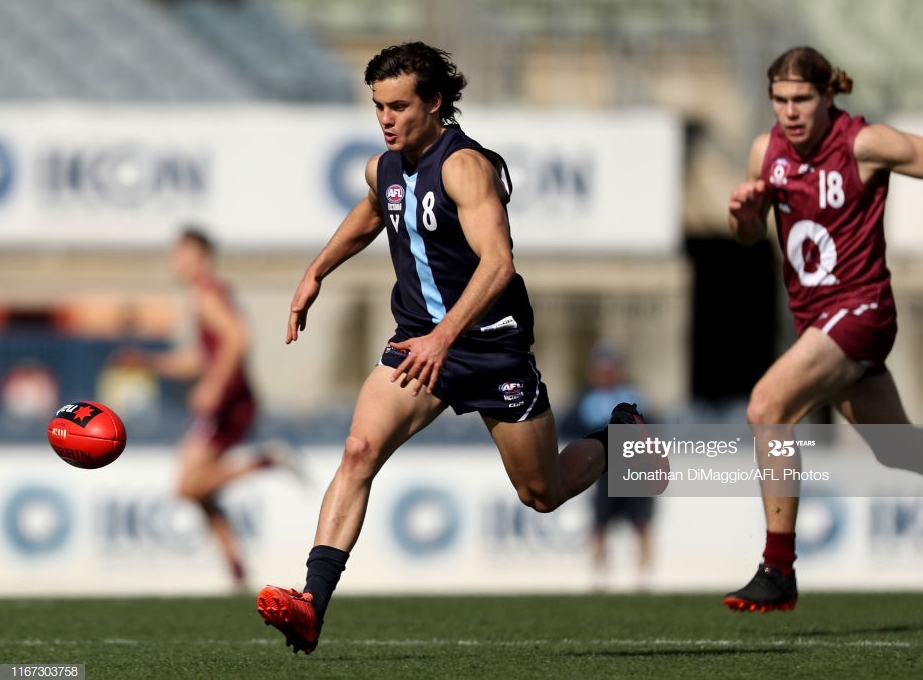 AS the postponement of all seasons commenced over the last few weeks, we head back to the pre-season where we sat down with a number of athletes across the country. In a special Question and Answer (Q&A) feature, Draft Central‘s Michael Alvaro chatted with Sandringham Dragons’ Darby Hipwell at the NAB League Fitness Testing Day hosted by Rookie Me.

The 181cm inside midfielder was one of the surprise omissions from this year’s Vic Metro Academy Hub, especially given he had already donned the Big V at both Under 16 and Under 17 level. But unlike others, Hipwell has been able to draw from the similar experiences of some of his former teammates, of whom have now ventured on to the elite level.

Currently a student at Brighton Grammar, Hipwell is set to mix his time between the NAB League and APS competitions should athletes be allowed to recommence their season. Having returned a solid result in the preseason yo-yo test (21.1) despite a humble assessment of his athletic base, Hipwell looks primed for a big top-age year with a point to prove.

MA: Darby, how’s the day been for you?

DH: “It’s been good. It’s good to test, it’s always a pretty nerve-wracking day to see how you go. But overall, it’s good to see all your teammates perform well.”

Do you feel like you’re performing well yourself, a few personal bests?

“Not quite, I’m not the best of athletes. But I just give it my best shot.”

More of a natural footballer then, are you looking forward to showcasing that once you get back on the park?

“I’d like to think so, I’m more of a traditional footballer I guess. I don’t really thrive on the combine testing days.”

Coming off a decent bottom-age year, what are the things you’re looking to develop?

“Just that inside midfield role, I just really want to cement my spot in the team this year. Hopefully I’ll play the first few rounds and just develop my disposal efficiency, my outside run and my kicking. They’re the main things.”

Will you be mixing your time between school football and NAB League as well?

“Yeah, I’m at Brighton Grammar in the APS. So I won’t play the whole season at Dragons, only a few games. But it’s really important to balance those two teams.”

Just missing out on the Metro Academy Hub, how have you dealt with that kind of setback?

“Obviously when the squad came out I was pretty disappointed but as soon as I saw it, I’ve just used it as motivation since. I’ve really tried to have a strong preseason, trained really hard and just used that setback as something that can hopefully push me forward.”

It would have been great last year having a bunch of mentors to feed off at the Dragons?

“Definitely. Last year I got to train in the midfield group with all of those boys – Finn Maginness, Ryan Byrnes, Jack Mahony. I just learned so much off them, watched all their little tricks and how they go about it. I think that’s really put me in good stead for the season coming up.”

Has that experience helped you set your own goals now, knowing the benchmark?

“Definitely. I’ve looked at their seasons and someone like Finn Maginness who missed out on the Metro (squad) at the first selection, I’ve really tried to model my game off him and the way he went about the first few rounds, and how he went through the preseason with his head up, training strong.”

What are some of those goals now that you’re looking to tick off?

“Just to have a good start to the season and a consistent season. I don’t really want to put too many benchmarks on what I want to make and what I don’t want to make. I just want to be satisfied with how I go and try and get the best out of myself. Train hard, and the rest will take care of itself if I’m playing good footy.”