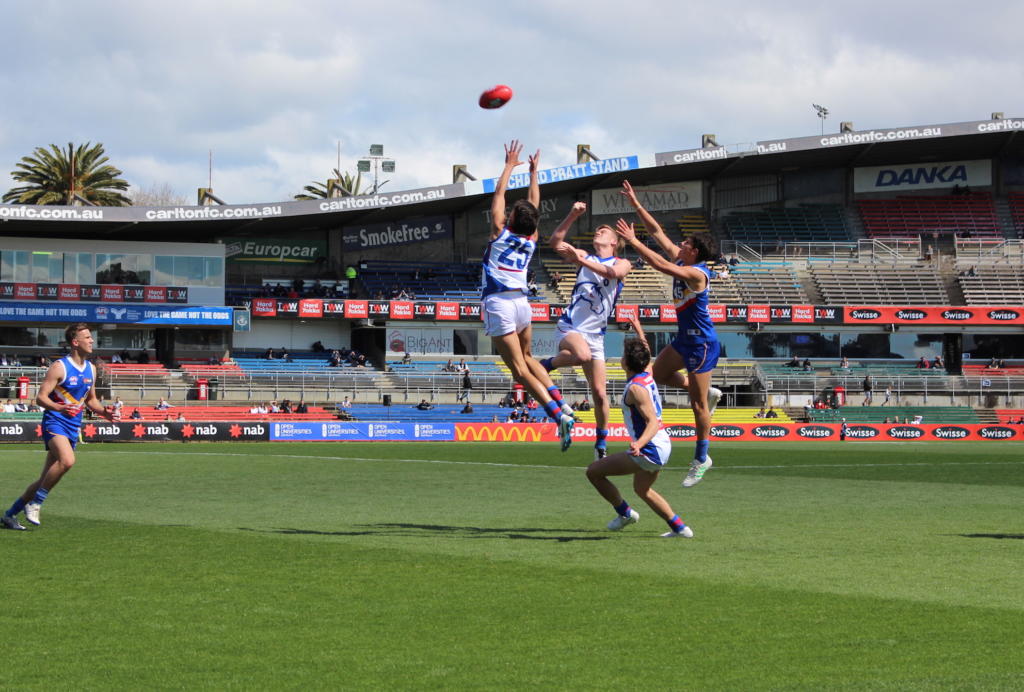 FOLLOWING a draft class somewhat short on pure key position forward options comes a cohort which has already shown promise in that exact area. Though they may not currently have the opportunity to show their worth on the field, exposed form and long preseasons for most allow for a window into how the current stocks stack up.

In ramping up our 2020 AFL Draft analysis, Draft Central begins its line-by-line positional breakdowns, starting with the big men. The following list features pocket profiles of top-age (2002-born) prospects who are part of their respective AFL Academy hubs, while also touching on some names who missed out last year, or may feature on another list.

Without further ado, get to know some of the premier key forwards who are eligible to be drafted in 2020.

A rare case in that he may well find his way into draft contention despite not playing any football for two seasons. Baldwin had cracked the SANFL Reserves level for Glenelg after an outstanding Under 16 national carnival, but unfortunately went down with an untimely ACL injury in 2019. A year of recovery has him ready to go though, and a 20.8 yo-yo test score in preseason suggests he is building back the running ability that sets him apart. Baldwin’s contested marking is also eye-catching, utilising his strong frame to split packs. He comes in lightly below true key position height, so is also working on moving further afield.

A traditional, hulking key forward who thrives on the physical aspect of the game. Callow was a standout for Tasmania at Under 16 level, and more recently in the NAB League having booted 24 goals from 14 games for the Devils in 2019. At 95kg, he is well built and hardly beaten one-on-one, but also has the clean hands and speed to mark strongly at full tilt. Callow has garnered heavy opposition attention thus far as Tasmania’s spearhead, but does not hold back on the aggression to shake it off. He can work on sometimes reigning that aspect of his game in, while also sharpening his consistency in front of goal.

Eyre is an Essendon Next Generation Academy (NGA) member who is still quite raw, but has some terrific attributes. Having endured his share of injuries across the last two seasons, Eyre has grown to a more traditional key position height and is filling out nicely. Those extra centimetres and an added five kilograms since the start of last year point towards Eyre featuring as a centre half-forward in 2020, though he is able to play up either end or even on a wing. An exciting one for Bombers fans, who have some worthy academy talents coming through the ranks.

The Sandringham product came on strongly last season, featuring across five games for Sandringham in between his Geelong Grammar commitments, while also running out for Vic Metro’s Under 17 side. Lord is an athletic tall who sits at the precipice of true key position size, with his leap and high marking the most prominent features of his game. Still very much a developing type, the 18-year-old did well to crack into Sandringham’s side last year given its plethora of tall options. Trained at Melbourne during the off-season, and should make up part of Vic Metro’s spine in 2020.

Another standout from the 2018 Under 16 carnival, McDonald has since shown plenty of the same potential having represented the Black Ducks at Under 18 level in 2019 as a bottom-ager. The Perth product has grown to key position size over the past year, and is one of the leading candidates in his role on the back of his ability to cover the ground well, clunk strong marks on the lead, and most importantly, find the goals. Has great endurance for a player of his size, notching a score of 21.3 on the preseason yo-yo test.

A developing forward who shot into calculations for representative honours, McMahon is perhaps a prospect who finds himself measuring up at an in-between size. While he certainly plays like a key forward with his terrific leap and sticky hands on the lead, McMahon does not have the height or weight of some of the other forwards on this list – perhaps suiting more of a third tall option at the elite level. Still, he averaged almost a goal per game over 15 NAB League outings in 2019 and should be another to feature in Vic Metro’s starting side.

One of the most exciting draft prospects and a candidate to be taken first off the board is West Adelaide’s Thilthorpe, who mixes his time between the ruck and centre half-forward. The South Australian already has experience at SANFL League level and at 200cm and 98kg, is a readymade key position player. Thilthorpe’s running capacity is elite for a player of his size, with his aerial presence and impact around the ground also desirable assets. He could develop into a modern day ruck who plays like a fourth midfielder, or become a swingman given his high ceiling.

Another more traditional key forward is Treacy, one of Bendigo’s leading prospects. The well built centre half-forward is not afraid to throw his weight around and is aggressive both in his leading and ground-level presence. While that aggression can sometimes land him in trouble, the 193cm Pioneer has shown there is more to his game. Speaking of, Treacy was spotted at a few centre bounces last year, so may even be poised for a move up the ground given he lacks the height of others in this category.

Arguably the most talked about draft prospect to this point has been Ugle-Hagan, a candidate to join the exclusive number one pick list, and a Western Bulldogs NGA product. The Warrnambool native formerly represented the Greater Western Victoria region, but has since relocated to Oakleigh’s zone given he boards at Scotch College. Ugle-Hagan is remarkably athletic, testing well across all areas during pre-season and proving just why he is near-unbeatable at full flight. His breakaway speed on the lead and high marking are outstanding, though Ugle-Hagan will be working on his field kicking and consistency in front of goal. Has also played in defence at times, but looks most comfortable up forward.

Among the others to consider are a good number of prospects who missed out on being drafted last year as top-agers, and 2020-eligible players who may well find their way onto other lists – position-wise.

Sandringham over-ager Felix Flockart is a mobile 200cm bolter who can play forward or through the ruck, and will be one to watch when/if football returns having impressed during pre-season.

Another in that category is Northern’s Liam Kolar, who has transferred some elite traits from an athletics and soccer background. The 194cm Knight has a high-level mix of speed and endurance, and looks promising with his lead-up work from the forward 50.

The likes of West Australian Shannon Neale, South Australia’s Zac Phillips, Ned Carey, and Henry Smith, and Victorian Jack Diedrich also came into consideration, but should feature on the list of rucks to later be analysed.

Dynamic NT Thunder Academy jet Joel Jeffrey can fulfil the high marking forward role, but is a touch undersized to be considered key position at this stage, while James Borlase and Sam Tucker are tall utilities who may feature more as defenders.

In terms of other 19-year-olds, Kobe Tozer is a likely type whose development has been restricted by injury, while 2019 Allies representative Liam Delahunty may look to stake his claim having crossed to Victoria from the GWS GIANTS Academy.

NAB Leaguers Jamieson Rossiter and Kyle Yorke are others who may get a second look as over-agers, while Charlie Dean is another who was poised to return in between VFL duties – though he may be utilised up the other end.