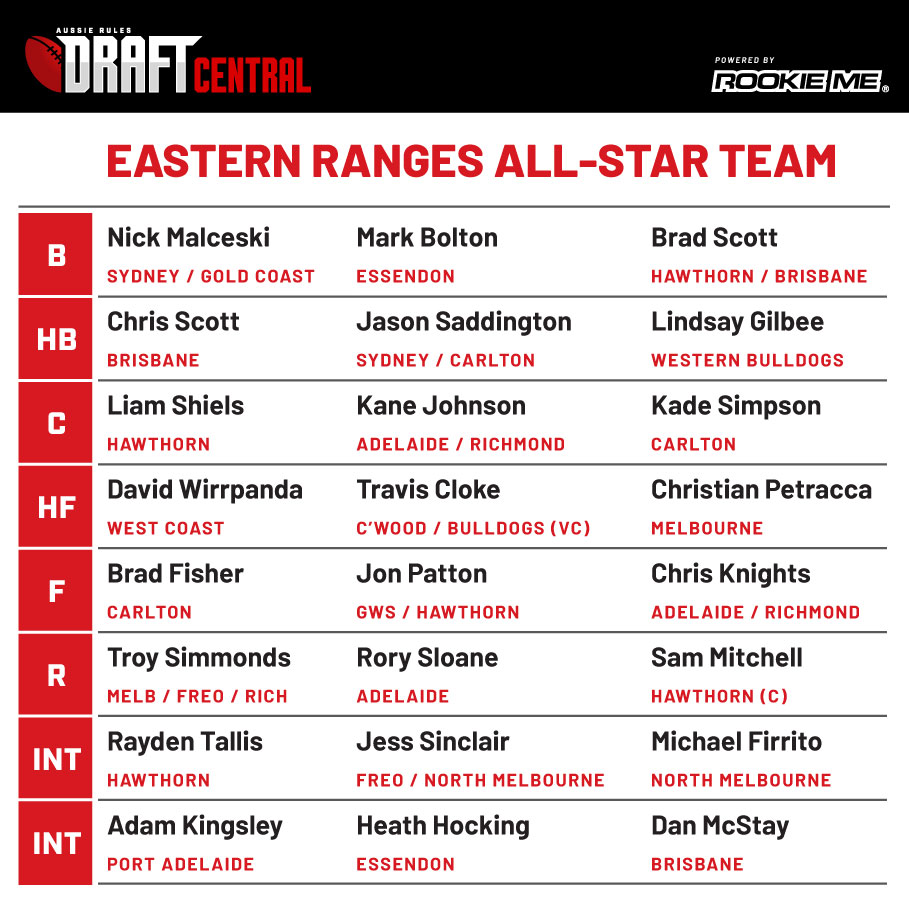 EASTERN Ranges’ All-Star side has a potent defence and strong midfield group which makes it a competitive outfit when comparing its best of the best at AFL level. With Sam Mitchell voted the Best Player of the AFL Era, he is one of 28 players to have reached the 100-game mark, though nine of those played between 100-109 games. Instead, three players under the 100-game mark have been included with some strong showings from a couple of modern day players as well.

Across the board, the most noticeable aspect about the Ranges’ All-Star side is trying to work out the back six. The amount of small and medium defenders who have progressed from the TAC Cup up to the AFL is envious of any other side, with some like David Wirrpanda put in the forward line – where he did spend time later in his career – because of the defensive strength.

The midfield is very impressive with a nice balance, and there’s some really solid depth across the board. While other sides might have greater depth in the top-end, the Ranges team as a whole has some match winners and plenty of consistent ball winners who would worry the opposition.

The two key defenders were easy to pick in Mark Bolton and Jason Saddington as the obvious choices, but the four around them were a lot more difficult. In the end the Scott twins – Chris and Brad – make it in after successful stints in Brisbane’s golden era, while Sydney and Gold Coast’s Nick Malceski, and Lindsay Gilbee round out the back side.

Others coming off the bench who could slide into the role include Rayden Tallis, Jess Sinclair, Michael Firrito and Adam Kingsley which gives fans an idea of just how many players could have slotted into the defensive 50. That is even before you consider Wirrpanda (half-forward) and Kade Simpson (wing) who in their prime would be half-backs.

The combination of Rory Sloane, Mitchell and Kane Johnson is one that other opposition midfields would fear. It is also a highly underrated midfield with Mitchell only really getting the plaudits he deserved later in his career. Liam Shiels and Simpson provide the run on the wings, while Heath Hocking makes the bench, and along with Kingsley, could come in and have an impact through the midfield.

With seven best and fairests and four All-Australians between Sloane and Mitchell, the duo would be a strong one-two hit combination onball. They would rove to Melbourne, Fremantle and Richmond ruck, Troy Simmonds who again was the standout choice for the ruck position, and as a whole the midfield would do its job and be tough to beat.

The less experienced third of the ground is definitely inside 50, though that is not to take away from Wirrpanda and Travis Cloke who both earned All-Australian honours and played more than 200 games. Cloke also won a best and fairest in 2007 and provides the strong marking ability the team needs. He would team up with the relatively inexperienced and injury prone – but incredibly talented – Jon Patton (89 games, 130 goals) as the two talls inside 50.

Brad Fisher (99 games, 127 goals) was a third tall named inside 50, though that was mainly due to just lacking another small-medium type with Christian Petracca (85 games, 79 goals) – who could be anything by the end of his career – and Chris Knights rounding out the front six.

Despite three players with less than 100 games making it into the team, there were a further seven players who had just reached the 100-game mark. A couple of players expected to force their way in over the coming years will be Hayden Crozier (108) and Paul Seedsman (101), while the other options of players who have reached 100 games were Simon Godfrey (105), Leigh Adams (104), Matthew Bate (102), Matthew Lobbe (100) and Aaron Young 100).

Of the current players expected to force their way in over time, Blake Hardwick (66 games), Jaidyn Stephenson (40) and Adam Cerra (41) have all made strong starts to their careers. Along with Callum Brown (35), James Parsons (35) and Sam Weideman (31) who have all passed the 30-game mark, the more recent crop of players coming through has plenty of positives for the future.