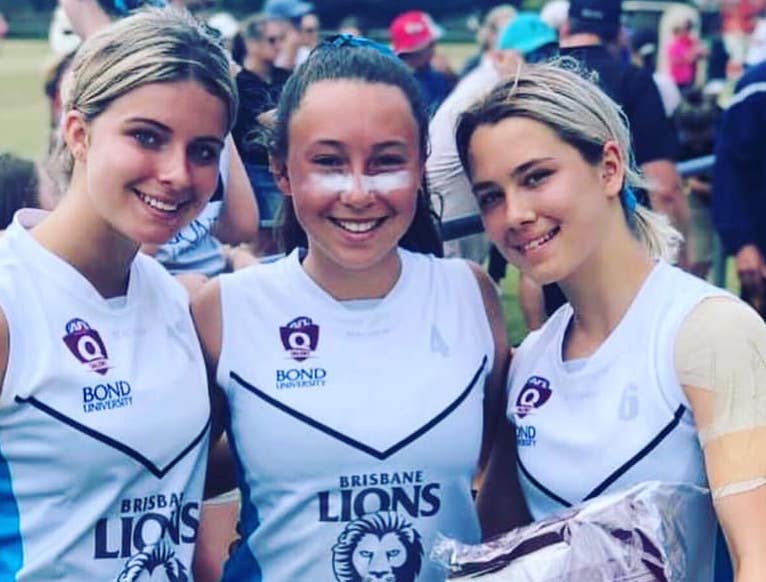 AS the postponement of all seasons commenced over the last week, we head back to the pre-season where we chatted to a number of athletes across the country. In a special Question and Answer (Q&A) feature, Draft Central‘s Taylah Melki chatted with Queensland’s Macie Brown at the state testing day hosted by Rookie Me.

Hailing from rural Queensland, Brown stunned many in her first year of footy earning a spot in the Brisbane Lions Academy and showcasing just how much potential she has.

How did you get into footy?
I was introduced to footy through school, a couple of my good teachers played in the QAFL and stuff. They suggested that I go trial for this thing called Brisbane South so I went and did that and turned out to be pretty successful. This is my second year now, my first year was last year.

Any major changes from first year to second year?
I impressed myself, I made it pretty far in my first year with Queensland and I wasn’t really expecting it and it kind of made me realise what I want to achieve with this year to hopefully get drafted and just keep going and go up through the ranks again.

What do you love about footy?
I love the community, how everyone is always like so approachable and you build some really good friendships and stuff compared to other sports as such. AFL is really community based so I love that.

Did you play other sports before trying footy?
Yeah I played mainly just school sports and then a bit of club netball, I went alright at it but like I said it wasn’t really a good environment as such.

What was the transition from netball to football like?
Yeah well I also played touch and I was pretty successful with that a little bit. I wasn’t the best at it and I thought I could take my AFL further so I did that instead.

What area are you hoping to strengthen this year?
Yeah definitely my defence. I want to be able to stick my tackles more often than not and hopefully work on my run and carry because that is really important.

What are some of your strengths?
I would say that I’m pretty agile, I’m fast and good at ground level. I can clean the ball up at the forwards’ feet I’d say.

How did you find the experience playing with Queensland last year?
Honestly it was overwhelming. It was my first year of footy and I didn’t think that I’d make it this far. I just took it all in and I loved the environment, I loved the elite level, expectations and standards. It was awesome.

What is the travel like?
I used to live out rural kind of half way between Ipswich and Toowoomba out near Gatton. But I chose to play in Brisbane because I knew a few people through the Brisbane South footy rep team and I just wanted to go straight into Brisbane and get amongst it so it was a bit of travel.

Where are you based now?
I just moved into Ipswich this year with my family so it is still a 40 minute travel but it’s not 80 minutes anymore. It was difficult last year because I was also playing under 17s so I was training four nights a week and then playing Saturday QAFL, Sunday 17s so I only had Friday nights free and I was working so it was a bit difficult.

How do you manage all of those commitments?
Yeah so being my senior year last year it was a bit stressful, a bit overwhelming but with the support of my mum and my family it really got me through and helped me organise and what not. My teachers were really understanding with deadlines and stuff like that.

Is your mum one of your driving passions for success?
Yeah definitely 100 per cent. I mean if it wasn’t for mum before I could drive she would be the one driving me in to Brisbane every week and every night almost, getting me there and supporting me.