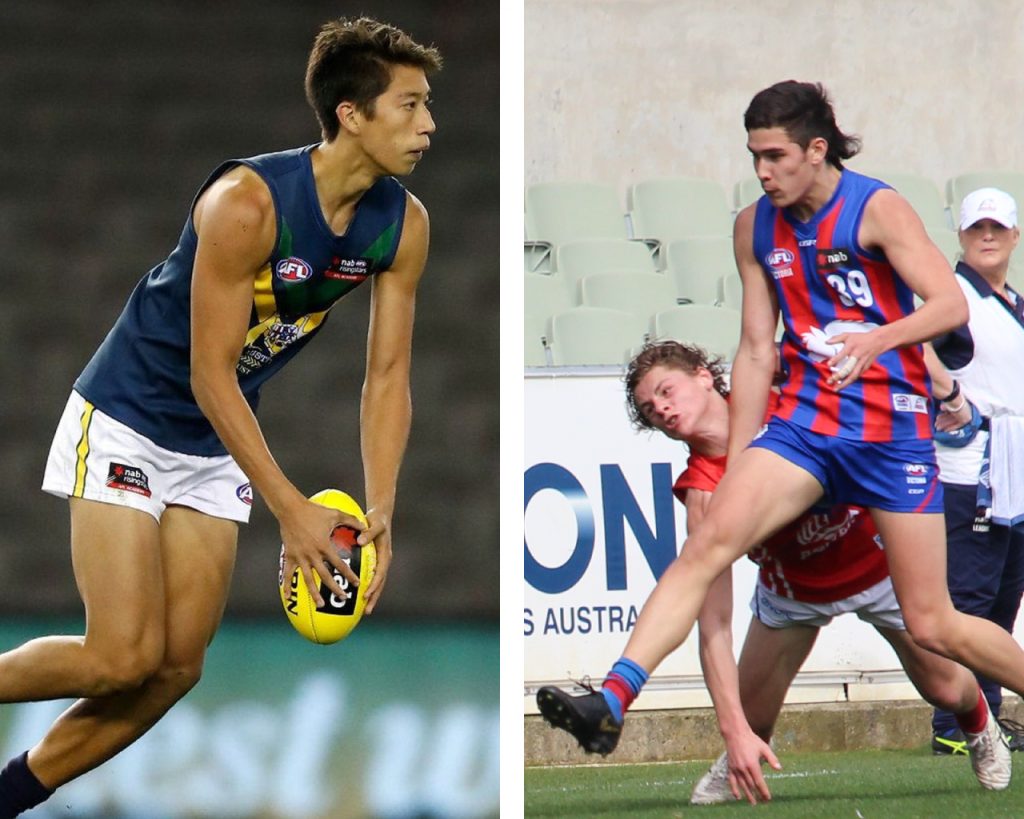 A couple of academy hopefuls make up our next pair under review, with Cairns native Alex Davies tied to the Gold Coast SUNS, while Reef McInnes is the latest Oakleigh Charger connected to Collingwood’s Next Generation Academy (NGA). The two are virtually identical in size and have already played in opposing sides thrice across three different competitions, providing a decent data sample to this point. Neither player was able to participate in preseason testing due to injury niggles, but are raring to go should they be called upon.

Davies has long been one of Queensland’s hottest draft prospects, and is certainly now the SUNS’ most prominent academy member. The 191cm inside midfielder provides a big body at the stoppages, dominating the clearance stakes with his clean hands, strength, and poise in congestion. He has often been Queensland’s best player during representative duties to date, earning All Australian honours at Under 16 level and impressing last year in the Under 17 competition. Experience in the NAB League also bodes well for Davies, as he helped the SUNS take out the Academy Series in 2019.

His adversary, McInnes has plenty of similar attributes as an inside midfielder, but was forced to play up forward for Oakleigh for much of 2019 given the Chargers’ phenomenal midfield crop. The 192cm mover managed to take full advantage of his limited time in the engine room though, showcasing his ability to find plenty of ball as he also does for Scotch College in school football. McInnes also possesses terrific athleticism for his size, allowing him to come away cleanly from stoppage situations and get his side moving forward. Having played in Oakleigh’s 2019 premiership side, he is also well versed in big games.

There is often only so much you can read into statistics, and this is somewhat the case with either player here. While Davies’ sample size in the NAB League is three-times smaller than McInnes’, his key stats arguably better reflect his overall game as an inside type. The Queenslander’s 49 per cent contested ball rate, 3.8 clearances, and 3.5 tackles are indicative of his stoppage dominance, while his average of 2.8 inside 50s come from long roosts out of congestion. Over half (9.8) of Davies’ disposals across the four games were handballs though, further reflecting his distributive role.

McInnes’ key stats over 12 games are products of his varying roles in the competition as a bottom-ager, having been pushed out to the flanks given Oakleigh’s stacked squad. Still, McInnes managed three games of over 23 disposals with a high of 29 when utilised through midfield, and made good of his chances in the side nonetheless. McInnes’ deceptive athleticism also comes through in his average 3.9 marks and low contested possession rate, as he showed he could gain separation from his direct opponent in the forward half, while also proving strong one-on-one inside 50. From midfield, McInnes’ accumulation on the spread has arguably proven superior.

Either players’ best games display similar upside in their efforts, with two-way work rate, the ability to find the ball, and scoreboard impact all evident across the two performances. Davies’ disposal count may be a touch low at 16, but his well-rounded outing against McInnes and Oakleigh in last year’s NAB League beat out his two 22-disposal efforts. He worked around the ground well to notch six marks, while using his physical presence to also have a say on the defensive side of the stoppages.

McInnes had a blinder against Geelong during the middle of the season, racking up big numbers throughout a rare midfield berth. A game-high 29 touches featured four clearances, five inside 50s, and two goals, with the Chargers’ defensive work also notable as he laid seven tackles. McInnes’ 28 disposals against Western in his next NAB League appearance was a close second, but his goals against Geelong showcase the versatility in his game. Again, the accumulation factor looks good for McInnes in these instances.

The ledger after these two meetings looks reasonably square, with Davies having a greater say in their NAB League clash, while McInnes managed to get one back in their representative hitout. It is also worth noting that the pair also faced off in the Under 17s All Star fixture, with both prospects returning terrific performances.

Arguably the best game to look at is the Under 17 carnival clash, where McInnes’ Metro side trumped Davies’ Queenslanders on home turf. Reason being, both players were utilised in their natural inside midfield positions on that day and were easily in their sides’ best handful of players. Though he had nine less disposals, Davies nearly matched McInnes for clearances, but the Victorian was on a tear early with his impact around the ground.

Ironically, the game also worked to somewhat highlight their respective improvements to be made, which will be touched on further down the line.

Given their similar position and ilk, the strengths of either player match up well. Both are fantastic in the contested ball stakes, able to use their size at the stoppages to burrow in and gain first use. But where Davies is superior with his clean hands and quick distribution, McInnes thrives with his repeated digs and ability to break away from congestion with either strength or agility.

Davies can be that clearance-first, or distributing midfielder – balancing his disposal by food and hand – while McInnes’ balance comes through in the sense that he can provide more of an outside presence to go with that ball-winning dominance.

Impact outside of the contest

As two high-end prospects with ideal athletic profiles and talent to boot, improvements are sometimes difficult to nail down. But there are a couple of areas to sharpen for either player, aimed at making them more complete midfielders.

Davies has said himself that getting to repeated contests and being on the move is an area he is improving on, with that impact outside of the contested situations theoretically allowing him to find more of the ball. While Davies is usually assured in possession, he can also blaze away at stoppages under pressure when a handball option does not present.

McInnes’ improvement comes from a desire to impact for four quarters, with his best football not always consistent throughout each game. Even in one of his best showings – against Queensland last year – McInnes started like a house on fire but faded towards the latter stages. Three NAB League outings of under 10 disposals also pertain to this point, and building a better tank through midfield could be a solution.

The Gold Coast academy prospect was one of Team Dal Santo’s better performers going through the midfield and winning plenty of the ball especially early.

He is a nice size as a modern day tall midfielder and he had no trouble winning first possession and dishing it out to his runners.

He kicked a lovely goal in the last quarter under pressure he was able to cleanly pickup and quickly kick a nice running goal.

Starting in midfield, McInnes proved he was more than an inside workhorse with his poise on the ball and sound decision making when hemmed in.

He has that surprising agility at times – much like GWS Academy product Tom Green and Carlton’s Patrick Cripps – which helps to get him out of trouble on top of his strength in the tackle.

The Collingwood NGA hopeful went on to become influential up forward, finding separation on the lead and almost pulling in some strong marks.

It proved a shrewd move, as McInnes booted two goals; the first coming from a 50m penalty, and the second shortly after with a classy snap from the tightest of angles.

There is not much to separate these two, who present as some of the finest inside midfield candidates for the 2020 AFL Draft. Both should come at a decent cost to their respective aligned clubs, though that often also works to push them down the pecking order come draft night.

McInnes’ work somewhat out of position to this point has been a blessing in disguise, adding versatility and a greater ability to impact around the ground to his well-rounded midfield game.

Davies is one of this year’s best contested ball winners though, and is rarely beaten in those stakes. While he can always work on adding strings to his bow, specialists are often hard to come by and many have been impressed by his kicking on the outer nonetheless.

We can only hope these two are able to get on the park this year to battle it out once again, potentially as direct opponents during either the NAB League or National Championships.

For more on these two draft prospects, follow the links below.