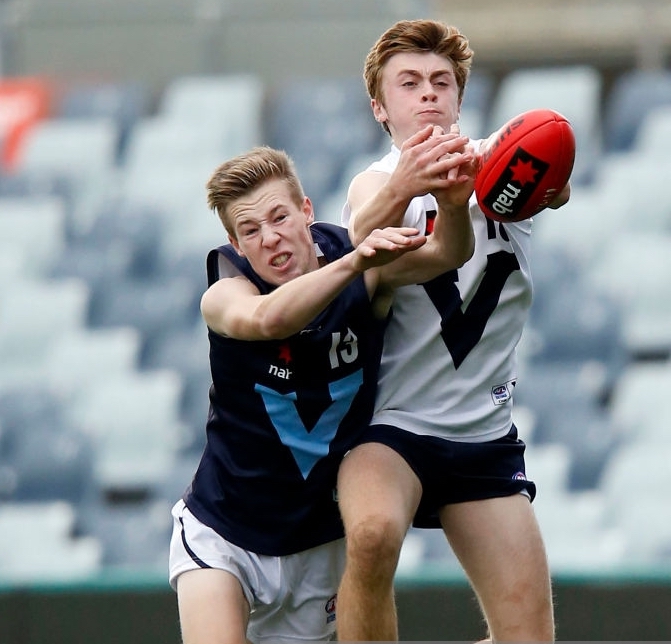 AS the postponement of all seasons commenced over the last few weeks, we head back to the pre-season where we sat down with a number of athletes across the country. In a special Question and Answer (Q&A) feature, Draft Central‘s Michael Alvaro chatted with Murray Bushrangers’ Tom Brown at the NAB League Fitness Testing Day hosted by Rookie Me.

The Mooroopna junior impressed both in the V/Line cup for Murray and Under 16 National Championships for Vic Country, showcasing terrific smarts around goal and clean movement from half-forward. The 184cm prospect also possesses great agility, and proved as much with a 8.10-second time at pre-season testing.

With promising athletic traits and the experience of running out in the Under 18 NAB League competition already under his belt, Brown looks set to have an impact in his bottom-age year – should competition get underway. In developing his inside game, Brown may also feature further afield as he develops.

TB: “The day’s been real great, thanks. “Loving it, all the boys are getting good results, just seeing where we’re at and it’s just a really good starting point for the year I reckon.”

Which are some of the tests you see yourself excelling in at the moment?

“I think the agility is probably my best test.”

Do you think that transfers to your talent on the field?

“Yeah I reckon it does. “I reckon it shows that I can duck and weave in packs and at the contest I can get away from my opponent easier.”

You had a pretty successful Under 16 National Championships last year, did you enjoy the experience in Queensland?

“That was a good time. “Everyone, they’re good fellas there and we played some real solid footy. We were just unlucky not to get three wins I reckon. But we did our best and it was a great experience.”

It must be awesome playing alongside the skipper and MVP of that team, Josh Rachele at Murray as well?

“I’ve been playing with him since juniors so we’re real good mates and yeah, just loving it. “I love that he’s getting the recognition that he deserves and doing well.”

Who are some of the other boys you’re looking forward to playing alongside?

“I was looking forward to playing with Elijah Hollands but he’s out now. “I think Zav Maher too.”

Are you looking to lock down a specific role this year, perhaps in the forward half?

“I’m looking to just move around and find somewhere else maybe to play. “I love the forward line but don’t know how long I’ll be able to last there.”

What are some of the things you’re looking to develop in your game at the moment?

“I’m really just looking to develop my contested ball. “I think I need to work on that and also just running, running patterns and stuff like that.”

And are you setting any goals for the year?

“I just want to get the Bushies to finals I reckon, get into finals and see how deep we can go with that.”