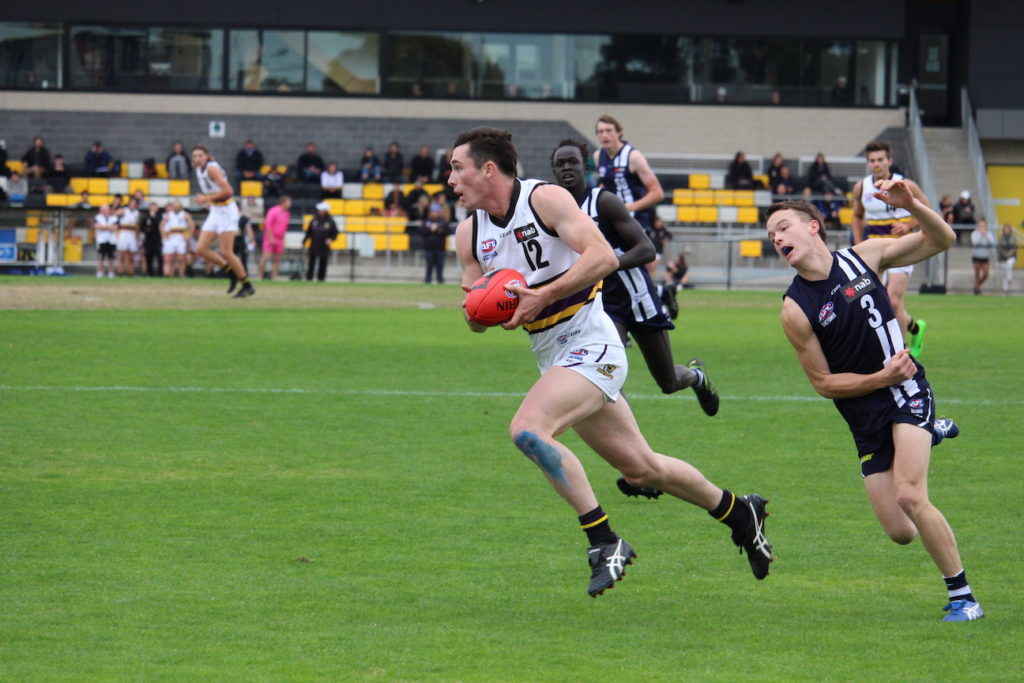 WITH the school football season in full swing and each Northern Academy back on their way past the Victorian border, normality resumed come Round 7 of the 2019 NAB League competition. Dandenong again remained the sole undefeated side after a top-against-bottom clash, while Eastern showed it was there to stay among the top four with a tense win over Sandringham.

But Avalon Airport Oval would play host to the weekend’s opening fixture, with country sides Geelong and Murray travelling to meet in Werribee. The Falcons looked like causing an upset against the inconsistent Bushrangers after a tight first half, but their inaccurate kicking for goal allowed Murray to hang in there and run over the top for a 21-point victory.

Western hosted Dandenong in Saturday’s only other fixture, but could not weather the home conditions in Williamstown as the Stingrays ran out 63-point winners. The visitors were in control all game having fielded a near full strength line-up, leading at every break and capping the result with seven final term goals.

Essendon draftee Ned Cahill was a constant threat up forward with four goals from 19 disposals, while a bottom-aged Eddie Ford was Western’s sole multiple goalkicker (two). The ball winners were out in numbers, as Darcy Cassar led the way with 29 touches, followed by 26 from Hayden Young and 25 from mid-season recruit, Mitch Riordan for the winners. Another 19-year-old, Daly Andrews (17 disposals, one goal) also pitched in among the losing effort for Western.

A much closer contest followed to open Sunday’s proceedings as Tasmania scraped ahead at the ideal time to edge Bendigo in a thriller. The Devils made a great start but were soon pegged back, still managing to lead at every break. That streak looked like being broken by the final siren, Jye Menzie saved the day with a goal after the siren to see his side hold on.

Menzie’s fourth goal came at the ideal time, and ensured he would double the goal tally of any other player afield. Four Pioneers managed multiple goals, with bottom-agers Sam Conforti (30 disposals, two goals) and Jack Ginnivan (27, two) the most prominent. In an even team performance for the Devils, Ben Simpson won the most ball (22 disposals), while third-gamer Isaac Chugg (15 disposals, 1.3) was dangerous and Sam Collins solid across half-back with 19 touches.

Onto the round’s fourth venue, and Gippsland found little difficulty in accounting for Calder on home turf, thumping the Cannons by 51 points as the visitors could only manage four goals for the game. The Power’s scoring flow got going after the main break, as they piled on nine goals to Calder’s three to coast to victory.

The Northern Knights and Greater Western Victoria (GWV) Rebels also started their clash at 1pm, with the travelling Knights raiding Mars Stadium successfully. The hosts started the better side with narrow leads at the first two breaks, but were overrun by Northern’s nine-goal second half as they went down by 32 points.

Northern’s strong bodies through midfield made their mark, with Sunny Brazier managing three goals from 19 disposals, while Carlton draftee Sam Philp booted two from his 20 touches. Ryan Sturgess also got on the board as he found the ball 26 times, but found himself beaten out by GWV’s Jay Rantall (36 disposals) in the ball winning stakes. Toby Mahony (20 disposals, three goals) and Mitch Martin (18, two) were others to stand up for the Rebels.

Arguably the best game of the lot was left for last as top four hopefuls Eastern and Sandringham locked horns at RSEA Park to see out the weekend’s action. 13 points was the game’s biggest lead – held by the Dragons early on – as the home side managed to nab a lead at the first three breaks. But Eastern would find an extra gear in the clutch, keeping Sandringham goalless in the final term to come away nine-point winners.

Sydney mid-season draftee Cody Hirst raised his hand for a call-up in his final game for the Ranges, amassing 31 disposals while Zak Pretty had a game-high 33 and bottom-aged gun Connor Downie managed 25 to go with a goal. Ryan Byrnes was Sandringham’s best, collecting 28 touches ahead of Angus Hanrahan (27), while Jake Bowey had 23 and Miles Bergman showed glimpses with his 18 touches and one major.