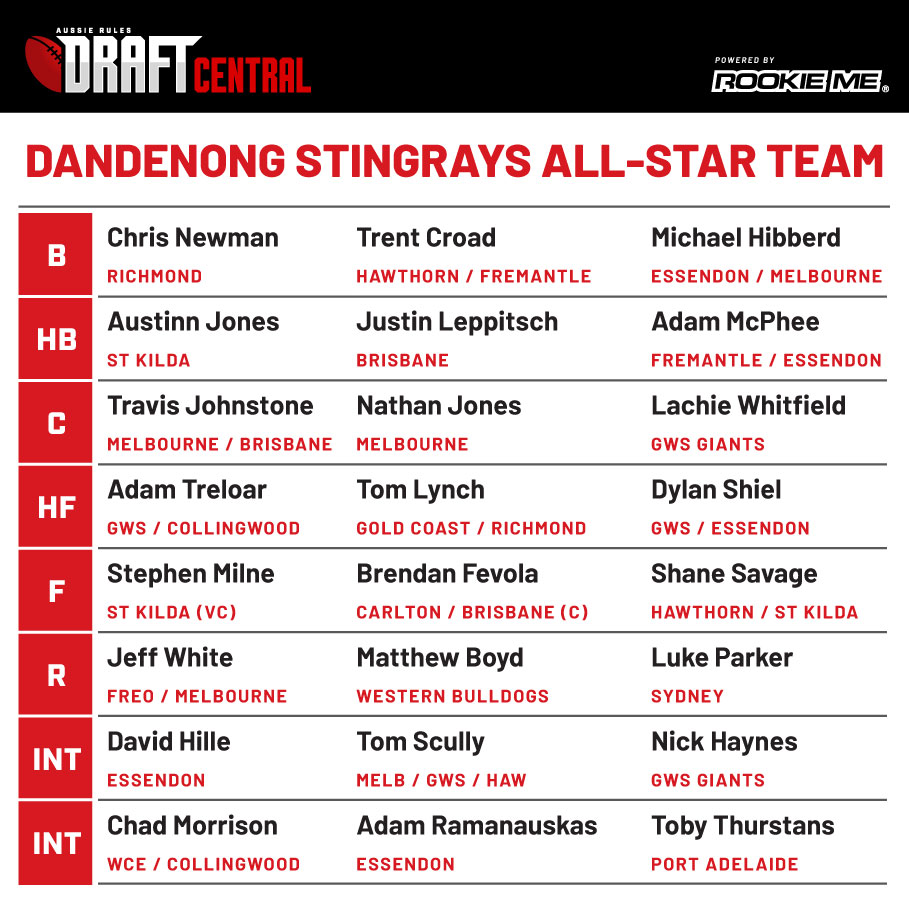 DANDENONG Stingrays’ depth in terms of talent beyond its best-ever side is quite impressive. It made it incredibly hard to selected just 24 players, with no less than 34 100-gamers already on the books and a number of others quickly making their way there. With Brendan Fevola voted the Best Player of the AFL Era, he leads a team that has very few weaknesses. The midfield and spine is superb, with some quality defenders, and one of the best small forwards of the AFL era also making the team.

The Stingrays have very few weaknesses in the squad we have picked, though an over abundance of quality midfielders means they have a couple sliding into the half-forward roles. If there is an area that slightly lacks it would be in the small-medium forward demographic with one of the best in Stephen Milne, but then a drop off to Shane Savage as the next best small-medium forward. The Stingrays are lucky however, because they have a lot of goal-scoring midfielders who can make up the difference and with a mix of accountable and offensive defenders, it would make it tough to kick a winning score against them.

The defence is led by three-time premiership player, Justin Leppitsch who is joined in the key position spots with Hawthorn and Fremantle’s Trent Croad. While Croad could play at either end, the fact the team has a couple of elite talents in the forward line means he is best suited on the last line of defence. Michael Hibberd will have the freedom to play that attacking style which really stood out over the past few years – despite a down year last year – because 268-gamer Chris Newman and one-time All-Australian and best and fairest winner, Adam McPhee take the defensive roles. Austinn Jones is an underrated player despite notching up 226 games and two All-Australians and competes a strong back six. On the bench, Nick Haynes is ready to step up in a key role if required, while Chad Morrison could play off half-back or through the middle.

Absolute A-grade quality that has depth for days. Led by three-time best and fairest winner and All-Australian, Matthew Boyd alongside current Sydney star, Luke Parker – who has two and one of those accolades respectively – the onball brigade is further strengthened by former Melbourne captain, Nathan Jones. He has three best and fairests himself, and even just looking at this trio, you can picture them not even needing a midfield coach with the drive and determination they would bring.

Picking the wingers was incredibly difficult because it was obvious that a couple needed to slide into the forward line. Adam Treloar and Dylan Shiel ended up being those players given they have the capacity to hit the scoreboard. The chosen wingers were former number one pick, Travis Johnstone, and GWS GIANTS rising star Lachie Whitfield because of their ability to run all day long. The depth does not just end on the field, with fellow elite gut-runner, Tom Scully on the bench alongside Essendon’s Adam Ramanauskas.

In terms of the rucks, Jeff White was the standout to earn the starting spot thanks to an All-Australian and a best and fairest from 268 games and 113 goals, while David Hille (197 games, 153 goals and a best and fairest) was the second option. In what is probably a coach-killer at the selection table, Toby Thurstans rounds out the bench due to being a premiership player (110 games) but also booting three goals from 11 touches and six marks in Port Adelaide’s 2004 premiership triumph over Brisbane. He might have the lowest games tally of anyone in the team, but has the flexibility to play forward and there are only the two key forwards, and standing up on the biggest stage counts for plenty.

A tale of two parts inside 50, with two genuine Coleman Medal chances in most years, but a lack of small options. Brendan Fevola and Tom J. Lynch provide a real good combination of talls with the stay-at-home full-forward who could flick the switch in a moment, and a lead-out contested marker who has the capability of working hard up the field and also hitting the scoreboard. Treloar and Shiel, who may not be forwards but deserved to be in the side, are  Milne and Savage. Milne played 275 games and booted 574 goals with two All-Australians in his time at the Saints, and has a case to be one of the best small forwards of the modern era. Savage does not have the same accolades yet, but has also played as a defender after being a defensive forward. On the bench, Thurstans can provide a pinch-hit role to give Fevola or Lynch a spell, while providing extra height in there.

As mentioned in the introduction, there are 34 100-gamers for the Stingrays so it meant 10 players who reached the century mark missed out on a spot in the side. Ryan Bastinac (164 games) is the most capped player who would be the first emergency in this scenario, while talls who have been maligned but also played some quality football in patches such as Andrejs Everitt and Levi Casboult are thereabouts.

In defence, Kris Massie and Dylan Roberton were also on the verge of making it in, while Carlton’s Darren Hulme worked hard in his 110 games. Twins, Ryan and Nathan Lonie were renowned for their 50-plus metre goals on the run, while Andrew Williams and Steven Salopek were the other 100-gamers to miss out.

Looking at current players who missed out, expect the likes of Zak Jones (90 games), James Harmes (91) and Nic Newman (51) to be in contention in the future, while Jacob Weitering (76) would be eyeing off Croad’s spot at full-back. Much more recently, Josh Battle, Hunter Clark and Luke Davies-Uniacke are others who have already made promising stars to their careers and have between 20-30 games to their name.