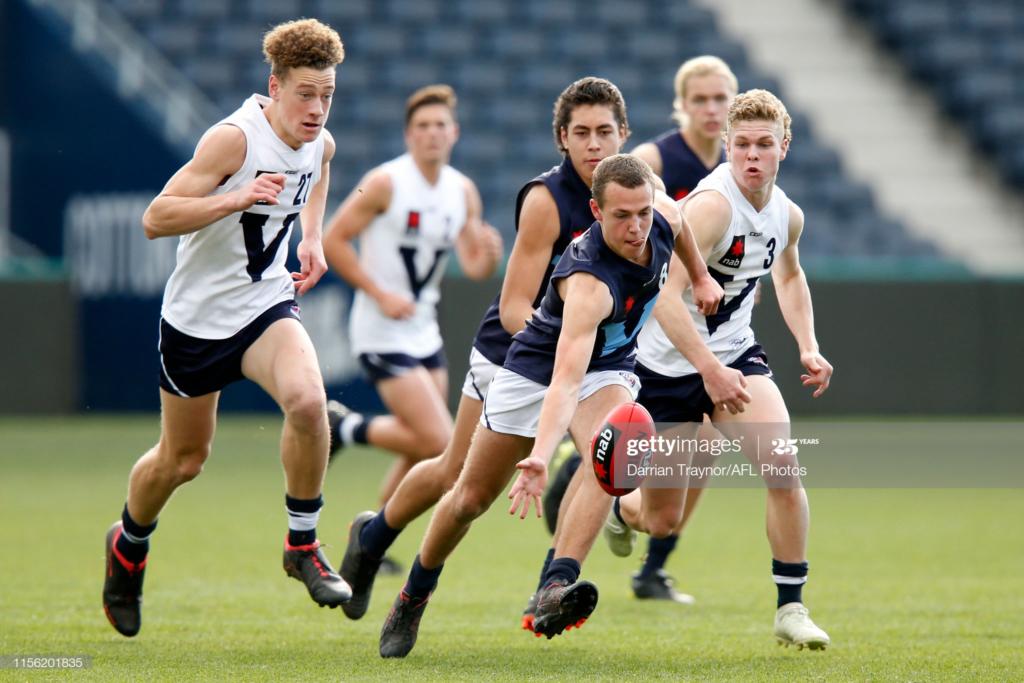 AS the postponement of all seasons commenced over the last few weeks, we head back to the pre-season where we sat down with a number of athletes across the country. In a special Question and Answer (Q&A) feature, Draft Central‘s Michael Alvaro chatted with Sandringham Dragons’ Lachlan Brooks at the NAB League Fitness Testing Day hosted by Rookie Me.

A hard-at-it small midfielder who can also ply his trade up either end, Brooks comes into his bottom-aged year having earned All Australian honours at the 2019 Under 16 National Championships, representing Vic Metro. He averaged 19.7 disposals, 4.3 clearances, and 6.3 inside 50s across the carnival, with his best game a 23-disposal and two-goal effort against South Australia.

While he was not particularly keen on much of the fitness testing during pre-season, Brooks performed well in the areas where he could showcase his explosive power; clocking in at just over three second in the 20m sprint, 8.2 seconds in the agility test, and over 70cm in the running vertical leaps.

Should the class of 2020 return to action on-field, the Brighton Grammar student has set his sights on winning the APS premiership with his schoolmates, while also cracking into the Sandringham Dragons and Vic Metro Under 18 sides. His most likely position is across half-back at this point in time, though Brooks’ clean hands and hard edge are transferable to his home in midfield or up forward.

MA: Lachlan, how’s the day been so far?

LB: “Pretty intense. A lot’s been going on, I’ve done a few of these but it’s always hard. It’s been good though.”

It doesn’t get any easier does it?

“Yeah, it doesn’t get easier. The 20m sprint is always my weakest but no, it’s all been pretty good.”

If it’s not the 20m sprint, which of the tests do you think you can shine in across the day?

“The vertical jump is probably my favourite, the yo-yo is never my favourite. But apart from that, it’s alright.”

You’re coming off a pretty successful Under 16 campaign with Vic Metro, how was the week up in Queensland for you?

“It was pretty good. Obviously we were pretty successful up there, it was a great team to be in. It was a good week up there and we were lucky enough to win it. Good campaign, good coaches.”

Coming into your bottom-age year with the Dragons, what kind of role are you looking to nail down early on?

“My coaches alluded that I’ll play prominently back, (as) a small back. But there’s no guarantee, I might not even get a game but we’ll see how it goes.”

Will you be mostly with the Dragons throughout the year or juggle your time with school football as well?

“Yeah I’ve got school (football), I’m at a private school so that cuts a bit of the Dragons season out. I’ll maybe play midfield there, but apart from that it’s just Dragons.”

Who are some of the boys you’re looking forward to playing alongside across those teams?

“Archie Perkins, who’s at my school and at Dragons. I played with him last year at school and he was good to play with. Caleb Lewis, who just came to Brighton Grammar and is in the 17s program. I’m just looking forward to school a lot because it’s a good team, and a good comp so we’ll see how it goes.”

Are there any goals you’re looking to tick off?

“I’ll try and win the APS premiership. It probably won’t happen, but I’ll try and get a game with Metro (Under 18s). It’s pretty hard, but hopefully (I can).”