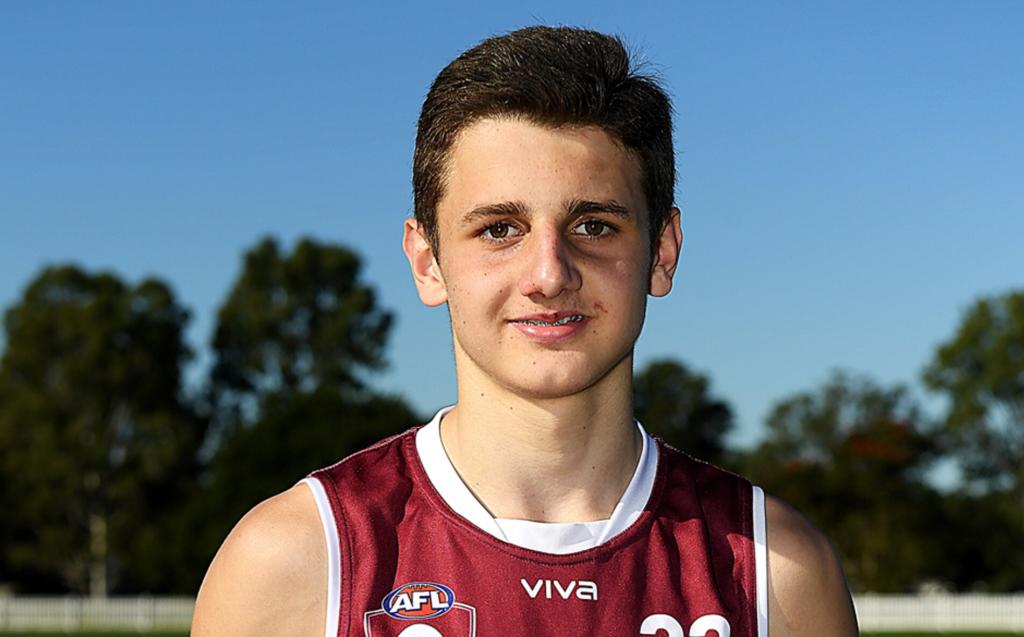 AS the postponement of all seasons commenced over the last few weeks, we are taking a look at some of the up-and-coming draft prospects for the 2020 draft. In a special Question and Answer (Q&A) feature, Draft Central‘s Peter Williams chatted with Brisbane Lions Academy prospect Saxon Crozier. As we delve into the Queensland-based talent, you’ll get to know everything you need to know about the brightest academy talents.

A tall and rangy outside midfielder, Crozier has featured among the elite ranks of the Queensland pathway system from a young age. Having impressed in that role with his ability to find space and generate forward drive on the outer, Crozier is now looking to bulk up and increase his inside midfield minutes throughout 2020.

The Lions Academy prospect featured in all five of Brisbane’s NAB League outings last year, averaging a tick under 18 disposals while racking up a high of 24 against minor premier, Eastern Ranges. Crozier has also been a staple of the Queensland side, cementing his spot in both the Under 16 and 17 squads to run out at both levels. Now tied to the Allies, Crozier has set the lofty goal of taking out the National Championships – should the class of 2020 get on the park.

PW: Saxon, you’re not testing today – have you picked up an injury?

SC: “No, I got a late call-up yesterday to play in the NEAFL practice match against the Gold Coast SUNS. “I played limited game time yesterday, only about 15 minutes but the (strength and conditioning) coach ruled me out today.”

So you had the choice of playing footy or doing a yo-yo test, and you picked the football match?

“Yeah quite easily, quite comfortably. “It wasn’t a hard decision.”

How’s the pre-season been so far?

What does it mean to be able to get a game in the NEAFL?

“I played a game last year as an under-ager. “It was just amazing, the leadership from guys like Ryan Lester and Brandon Starcevich, a couple of those boys were just awesome. “It’s a pretty easy game to play in because you’re constantly just told where to go, the instructions are quite clear so I don’t have to do too much thinking. It was a great game.”

What kind of areas are you looking to improve on throughout the season?

“Obviously I pride myself on my outside game; finding space, running, and what-not. “But over the off-season I’ve done a lot of work on my inside game so this year I want to develop my inside ball, contested marking, contested ball, tackling – just that side of the game. I’ve been doing a lot of work with Brent Moloney on that.”

Do you still picture yourself playing that outside role this year?

“You’ve obviously got to play to your strengths so I definitely still want to develop my outside game and show recruiters that side of my game. “But I 100 per cent want to get more game time in the midfield and see if I can develop my inside ball. “I’ve been doing a lot of work so hopefully a bit of both, to find a nice balance would be preferable.”

What’s it been like being a part of the Brisbane Academy?

“It’s awesome. “We were lucky enough to spend two weeks before Christmas with the actual senior team, training with them. “It’s just the most valuable time you could possibly get, there’s nothing that emulates being around the footy club, around the boys, listening to conversations. “It’s why you play footy I guess, it’s what you want to do so it was awesome.”

How did you find the Academy Series last year and coming down to Victoria?

“It was obviously a great opportunity to play against some of the stronger (Victorian) clubs and last year we obviously didn’t go as well as what we probably wanted to but this year that’s driving us. “We really want to compete with those teams so this year it’s definitely exciting. “But last year was, as an under-ager, more of an eye-opener to see what the standard is down there. “I’ve been trying to impart my knowledge on the younger boys and get them ready for the stronger (Victorian) teams.”

How has your development gone throughout all the pathways over the years?

“I started playing footy when I was 12 and I’ve pretty much been a part of the Queensland pathways since then. “I’ve got a lot of mates that play Rugby Union and stuff like that, but the AFL pathway compared to those sports is not comparable. The AFL’s is very clearly set out, the teams you need to make (and) the kind of games you need to be playing in.”

What made you choose to play Australian rules football?

“I originally played League and was a bit smaller, I broke my collarbone a couple of times as an 11-year-old. “I said to myself ‘I’m probably going to be a tall, skinnier kid’ so AFL suited me better and ever since I started playing, I haven’t looked back.”

And what are some of your goals for this year?

“Obviously to play in all the games, to stay fit and healthy. “But I want to win as many games as possible whether I’m playing for the Lions Academy or Allies, I just want to win so that’s probably my main goal. I really want to win the National Championship with the Allies, that’d be awesome.”