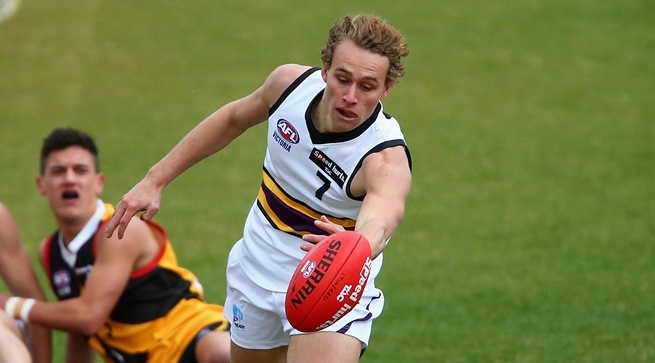 IF you are missing footy like we are, then let us somewhat salvage that with a look back in a new series of Classic Contests. In today’s contest we look at one of the would-have-been Round 8 clashes in the NAB League this year between the Dandenong Stingrays and Murray Bushrangers. In this edition, we wind back the clock to 2016 when the two teams were locked in an epic tussle at Shepley Oval in mid-August.

In a good year for both sides, Dandenong Stingrays and Murray Bushrangers were set for a Round 16 clash as both teams would be close to full-strength. While the Stingrays were still missing a couple such as top prospect, Luke Davies-Uniacke, the teams would eventually field 14 future AFL draftees – four of which would head to St Kilda – in a top-end talent-filled match.

Coming into the game, Dandenong was leading all-comers with a three per cent gap on second placed Geelong, though the Bushrangers were just two points behind and just marginally a per cent behind the Stingrays. It shaped up to be an absolute epic, and unlike many, the pre-game predictions of the match being a beauty, lived up to expectations.

Dandenong took control early, booting four goals to two in order to take a 12-point lead into quarter time. Starting the game as favourites, particularly on their home deck, the Stingrays looked to take full advantage early in the game. Not to go away quietly, the Bushrangers produced one of the better quarters for the year that the Stingrays had faced, booting three goals to zero – holding their opponents to just one behind – to lead by 12 points at half-time.

Continuing the see-sawing contest, it was Dandenong that regained control in the third term, booting three goals to one, and could have led by even more than their three quarter time advantage of two points. In the premiership quarter, the Stingrays piled on 3.5 to 1.3 and grabbed the lead but were not entirely comfortable. In a thrilling final term, both teams booted three goals, and while the Bushrangers clawed back a point from the deficit, could not hit the front and fell short, 10.8 (68) to 9.13 (67).

Murray would have the last laugh at the end of the season, upsetting the minor premiers in the qualifying final by 26 points as they went on to reach the 2016 TAC Cup Grand Final before going down to Sandringham Dragons. Two weeks earlier, Dandenong would exit in straight sets, booting just four goals in a 61-point loss to the Dragons in the semi-finals.