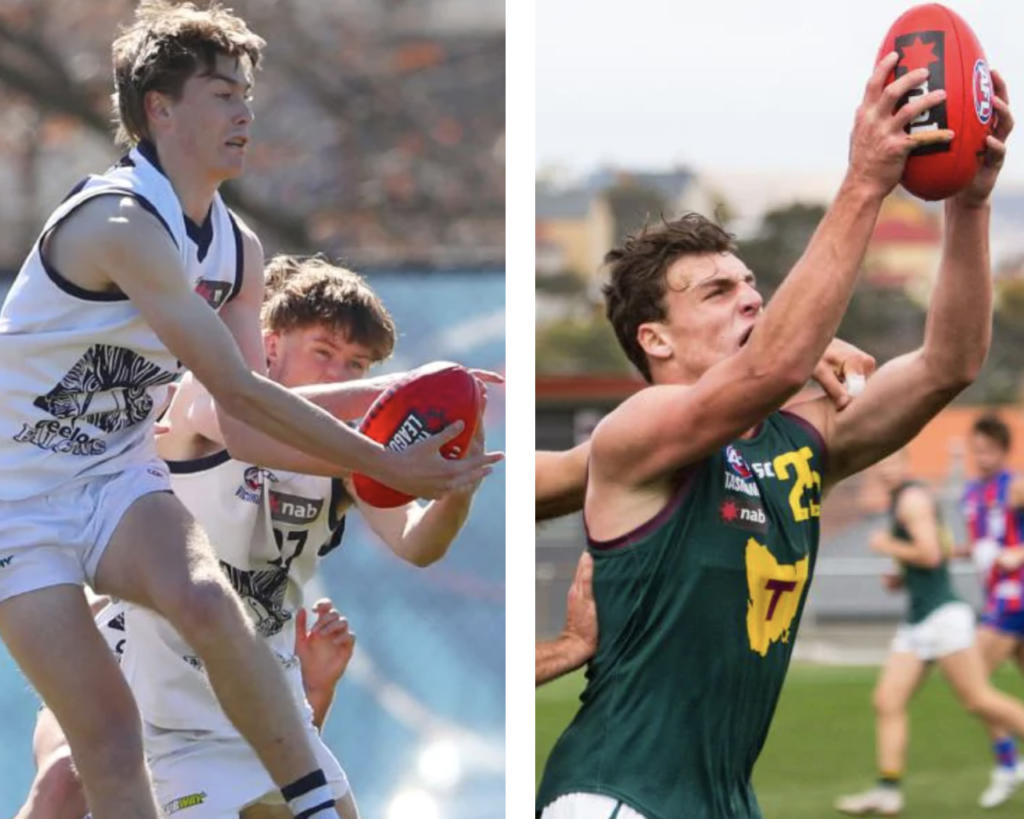 The next potential pairing under review has already taken place, with Geelong’s Cameron Fleeton and Tasmania’s Jackson Callow matching up on each other in Round 16 of last year’s NAB League competition. A phenomenal game from Fleeton helped the Falcons take four points back home to Victoria, but the quality between the two and their willing competitiveness points toward plenty more cracking scraps in the future.

Geelong’s co-captain in 2020, Fleeton came on leaps and bounds toward the back end of last season, debuting in Round 8 and missing just one game on route to cementing an important role among his side’s back six. At 190cm, the Geelong West product also often saw himself matched-up against the opposition’s number one forward, who usually had him covered for both height and weight. It mattered little, with Fleeton’s coverage of the defensive 50 as a whole and closing speed on the lead making up the size difference.

Callow has been at the forefront of the 2020 draft class since his outstanding display at the 2018 Under 16 Division 2 national carnival for Tasmania, showing off the brute strength and contested marking that makes him such an exciting prospect to this day. Though his best work is done in the attacking half, Callow has also shown he can pinch hit in the ruck and hold his own when swung into defence. Having run out on AFL Grand Final day for the Under 17 All Star showcase and won a TSL premiership with North Launceston last year, the big Tasmanian is a proven performer on the big stage.

Without further ado, check out how the two match-up in terms of their form to date, strengths, improvements, and what has already been said about their performances in our scouting notes.

As mentioned, Fleeton came to prominence at the Under 18 level in the back-end of 2019, hardly missing a beat as he slotted into the Falcons’ lineup. The most impressive aspect of his game was the combination of offence and defence across centre half-back; doing his bit to cut off opposition attacks with intercept marks and one-on-one wins, while also rebounding with poise. It showed in his averages of 3.4 marks and 4.7 rebound 50s, and outliers in Rounds 8 (six disposals) and 18 (seven) dragged that disposal average down to just under 16, despite managing over 20 thrice.

Callow’s marking game is reflected in his average of six per game, getting up to as high as 10 against the Northern Knights mid-way through the season. He also notched eight marks on four occasions, and only dipped below five, twice – one of which being against Fleeton. The bigman’s ability to work up the ground and provide a target also showed with his 13.6 average disposals, with heavy opposition attention close to goal only compounding that kind of work. Held scoreless just twice, Callow was constantly Tasmania’s primary target, and his three hauls of four goals prove that.

It was difficult to whittle down Callow’s single best game given he managed four goals on three separate occasions, but only once did he manage a handful of majors. His bag of five against the NT Thunder Academy in Round 3 came from a season-high 19 disposals and near-best of eight marks, with no opposition able to combat his strength and aerial threat inside 50. Callow was prominent in almost every game he played, but this one just had to take the cake.

We have judged Fleeton’s job on Callow in Round 16 as his best performance for the Falcons to date, despite falling below season highs for disposals (24) and marks (seven). Geelong struggled for wins in 2019, but the youngster’s blanket job on Tasmania’s spearhead went a long way to ensuring they would pick on up on the road, giving it all the more significance. Fleeton’s shutdown work in the air and offensive threat by foot were top notch, making it a benchmark kind of game for the Falcons skipper.

Callow’s second-lowest disposal and mark hauls came against the lockdown job of Fleeton, who adjusted well to blanket a bigger opponent. The Tasmanian’s frustration showed on a couple of occasions as Fleeton and the Falcons got on top, with Callow’s early aerial threat largely accounted for after quarter time. Fleeton looked to be really trusting his marking and disposal by foot, while Callow was tried a touch further afield as the game wore on. Tough day at the office, but a great physical contest between two young guns.

For Callow, it is almost a classic case of if you watch him once, you’ve watched him a thousand times. His strengths are obvious from the get-go, with that trademark contested marking and fearless attack on the ball making him such a special talent. Countless opponents found it near-impossible to stop him in the air without help, and Callow’s aggressive follow-up work at ground level on adds another string to his bow. Tough conditions and heavy attention may have sent some of his scoring attempts wayward at times, but Callow is usually a sound kick for goal.

While Callow often uses his strength to outdo the opposition, Fleeton can engage in a variety of ways to shut down his direct opponent. His reading of the game is sound, allowing him to float in from the back or side of packs, while his closing speed means he is seldom beaten on the lead. Fleeton’s work on the defensive side is matched by his output going the other way too, with sound decision making and execution by foot both features of his game. Those kind of two-way defenders are invaluable, and his versatility allows the Falcons to adjust to a variety of set-ups.

Draft analysts often find themselves splitting hairs when attempting to pin-point the improvements to be made in a prospect’s game, and it is no different here. The respective improvements listed are not necessarily complete blights on their games, but rather areas which could help take them to the next level.

While he has been employed down back and can do the ruckwork inside attacking 50, Callow’s ability to have the same impact in those areas than he has up forward could help grow his stock even further. With modern day key position players often made to adjust their roles along the line, it certainly would not hurt. An area that has not been listed and is ironically placed in the strengths category is Callow’s aggression. The bustling bigman has been shown to get frustrated in the face of opposition attention at times, something he will unfortunately need to get used to given his immense talent.

Fleeton was one of the players to get under Callow’s skin, and it could have had a few people worried for him given the difference in size. While his versatility is a terrific plus, Fleeton may find it hard to play a pure key defensive role at just 190cm – a bit of an in-between size. His assets help to make up for it at the junior standard, but a more intercept or rebound heavy role will suit him at the next level. Something not listed is also Fleeton’s willingness to make risky kicks going across his defensive 50 arc. While his skill may see them come off more often than not, it could come unstuck with greater pressure applied.

Callow looked like having a huge game after he booted three goals within the first half-hour, but was clamped well after the main break with Eastern ensuring he would compete against two or three markers in the air.

He started off by winning a ground ball against his direct opponent deep inside 50 before snapping the first goal of the game, following up with a huge pack mark and set shot goal to highlight a scintillating opening.

He also created Will Peppin’s goal after booting his third, marking deep in the pocket and kicking well inboard. His physicality ensured that direct opponents were more occupied with holding him that getting to the ball, and Callow’s work off the deck was scarily good for a player of his size.

2019 NAB League Wildcard Round vs. Sandringham

Was quite possibly Geelong’s best player given the heat he took on in a key defensive post. Fleeton was as sure as anyone by foot, switching confidently across defensive 50 to try and set the Falcons on the right foot coming out of defence.

Two of his three marks were fantastic too, intercepting strongly in the first term and sticking a one-hander going back in the second to show some courage and athleticism. The bottom-ager was also incredibly composed on the ball, not afraid to take on opponents on the last line and burning one in the second quarter with a good piece of agility after gathering over the back.

Also contributed some second efforts with the result beyond doubt, showing heart on a rough day.