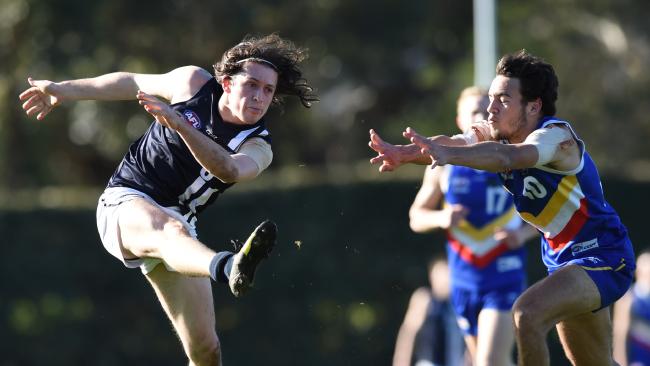 IF you are missing footy like we are, then let us somewhat salvage that with a look back in a new series of Classic Contests. In today’s contest we look at one of the would-have-been Round 8 clashes in the NAB League this year between the Eastern Ranges and Geelong Falcons. In this edition, we wind back the clock to 2016 when the two teams faced off at Box Hill City Oval.

Crossing the West Gate and heading up the Eastern to meet the Ranges at Box Hill, the top of the table Geelong Falcons were strong favourites against a seventh placed Ranges outfit. Despite having a ton of talent – almost 20 draftees over the next two years – Eastern was six wins from 14 games with a number of players unavailable throughout the season. The Falcons also had plenty of top-end talent missing, but the game was not without some future AFL young stars in Jaidyn Stephenson and James Worpel on opposing sides.

Both sides hit it off early with neither team able to be split in the first term. From seven scoring shots, the sides headed into the first break with a 4.3 scoreline each and the knowledge that their opposition was not going to back down. Against the odds it was Eastern that broke clear in the second term. The Ranges piled on five goals, largely helped by the influence of Stephenson up forward, whilst the Falcons booted the three to be trailing by 10 points at the break. Again both sides had the same amount of scoring shots, but the 5.0 to 3.2 in favour of the home side was the difference at half-time.

The ladder leaders would get back on track in the third quarter, booting 4.2 to 2.2 and take a two-point lead by the final break, The stage was set for a ripping last quarter, and while there was only a combined four goals kicked between the sides, the tension was unbelievable. Geelong had the lion-share of disposal, recording nine scoring shots to the Ranges’ four. Whilst inaccuracy could have hurt the Falcons, they did enough to dominate the ball and capitalise where possible with forward 50 possession and eventually got the four points, 13.14 (92) to 13.7 (85) in a tight contest.

Despite the loss, Stephenson was the clear best on ground, slotting five goals from 14 touches, four marks – two contested – and four tackles, while Trent Mynott (two goals) was busy with 20 disposals, four marks and four tackles. Future Crow, Gallucci was also among the top Ranges, helping himself to 18 disposals, two marks and four tackles, but gave away five free kicks. Working hard through the ruck, Sam Hayes had 33 hitouts from 18 touches, seven marks – two contested – and two tackles in the defeat, while Tate Short and Billy Norris booted a couple of majors each and were named in the best. Of the other draftees, Dylan Moore (18 disposals, three marks and two tackles) and Josh Begley (16 disposals, three marks and eight tackles) both contributed strongly.

The Falcons would end up finishing second on the TAC Cup ladder and reach a preliminary final but fade away in the second half against Sandringham Dragons. A fortnight earlier, Eastern Ranges would fall two points short of the Dragons on their way to the 2016 TAC Cup premiership.