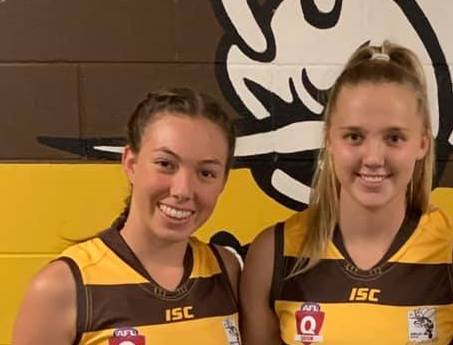 AS the postponement of all seasons commenced over the last week, we head back to the pre-season where we chatted to a number of athletes across the country. In a special Question and Answer (Q&A) feature, Draft Central‘s Taylah Melki chatted with Queensland’s Lucy Pengelly at the state testing day hosted by Rookie Me.

A product of the Aspley junior ranks, Pengelly’s rate of development has been exceptional as a relative newcomer to the sport. The Brisbane Lions Academy member took out the Hornets’ senior QWAFL best and fairest award in 2019, her debut season, pointing toward a bright future in the game.

TM: Lucy, how did you get into Australian rules football?

LP: “I actually started pretty late, through high school. “I started playing through the school team, then my friend was like ‘You should just come join club (football)’. “She brought me to club, then I just fell in love with it, started playing and have been playing ever since then.”

What is it about footy that you’ve fallen in love with?

“I think it’s just something different to what other people do every day. “It’s a good outlet for all the stress and just getting around, having a big team is also really good because you make a lot of friends.”

And you started playing around the latter half of high school?

“Yeah, it was about Grade 9 that I started playing.”

Were you playing any other sports before that?

“I was actually a dancer before that.”

That’s a big change, how have you found it?

“But dancing was my main sport, then it changed to AFL and I just loved it straight away because it’s just a really different thing, but I found that dancing also helped me with things like flexibility and the strength that you need for certain things like kicking in AFL.”

How did you adapt to the physicality and contact?

“At first I think I was a little bit scared about it but as soon as I started playing, it just felt natural to me.”

Is there a particular area you think you’re really strong in?

“I think my perseverance in the game is pretty good. “I just like to keep going, no matter if we’re losing or winning I always want to put in my best effort and no matter what the outcome is, I just want to know that I’ve tried my best.”

Is there a particular area of your game that you’re looking to strengthen this season?

“I’m really hoping to just strengthen my kicking and my marking, so just the little skills. Build on those, and a bit more knowledge of the game as well. “Because I’m a pretty new player I’m just hoping to build some more knowledge.”

And how are you finding the Brisbane Lions Academy?

How do you go about balancing club football, the Academy, your studies and everything else?

“It takes a bit of effort to balance but you’ve just got to make sure you communicate with lots of people and communicate with the coaches. “They’ll tell you (where) you need to be at, and what you can afford to miss.

“It’s been a bit of an issue since I’m starting uni and have also started working but I’ve managed to sort it out now I think.”

What are you studying at uni?

And how’s the preseason been for you?

“It’s been really fun. “I’ve done all of my preseason mostly with the Academy because club (training) is on the same nights as the Academy. “But it’s been good, I’m happy with where I’m at, at the moment and hopefully I can keep building on it throughout the year.”

Do you find there’s a difference between what you do at the Academy and at club level?

“Not as much as I noticed between Under 17s girls and the Academy but with the Women’s football, it’s kind of on the same level.

“Academy is just a bit more individualised, you always have the coaches coming up and telling you what you need to work on. “It’s good to have a bit of both, it’s just two different teams and two different environments.”