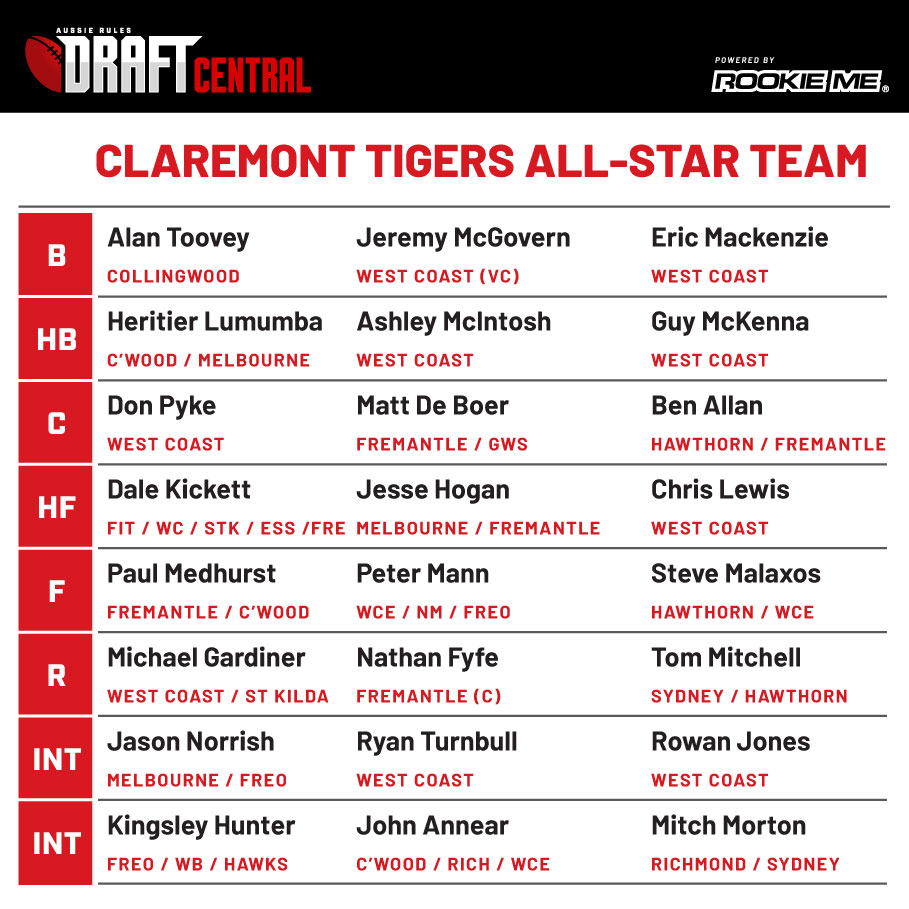 CLAREMONT has had some absolute stars roll through its program prior to being drafted, making the top-end talent of the Tigers’ AFL All-Stars team undeniable. With Nat Fyfe voted the Best Player of the AFL Era, he leads a team full of talent across the park. The onball brigade and defence in particular is impressive, with a lot of talented forwards coming up in recent years.

The Tigers have had a lot of 100-plus gamers – 26 according to Draft Guru – so naturally not all can make the 24-player squad. In three cases, players with less than 100 games have been chosen based on what they had shown in their limited games. The lowest games tally in the side is Steve Malaxos who was a gun forward for the Tigers in the WAFL before trying his hand at the elite level. He only played the 75 games, but won two All-Australian nods and a best and fairest – not too shabby for just 75 games. Also in there are Jesse Hogan and Mitch Morton (both 83 games), having booted 165 and 116 goals respectively in their time. As a whole, the bench was difficult to pick, splitting hairs when it came to who made it and who just missed out.

The defence is ridiculously strong, with talls that most of these All-Star teams would be envious of. He has only played 126 games, but Jeremy McGovern has already won four All-Australian nods in his time to lock down full back, with one-time All-Australian and best and fairest winner, 242-gamer Ashley McIntosh holding down the other key role. Behind Fyfe as Claremont’s second best player to step up to the elite level, Guy McKenna won three All-Australians and two best and fairests with the Eagles on his way to 267 games as a half-back. Around the trio are three players who had some very good seasons, with Heritier Lumumba (223 games) winning a best and fairest, and Alan Toovey (159 and a premiership) and Eric Mackenzie (147 and a best and fairest) both forging out strong careers to make the starting squad. With Ryan Turnbull and Jason Norrish on the bench, the defence is a huge strength.

In terms of sheer ball-winning ability, the duo of Fyfe and Tom Mitchell in today’s era would be near-unstoppable. It is no surprise to see Fyfe voted the best player of All-Time from the Tigers following two Brownlows, three All-Australians, three best and fairests and a couple of MVPs alongside many other awards. Mitchell by comparison is tracking a similar route, having played 62 less games (111) but won two All-Australians, a Brownlow, two best and fairests and an MVP himself. Joining them in the midfield is one of the best taggers in the game in Matt De Boer, who this hypothetical side can afford to have given the freedom it would hand the top duo. Don Pyke might be better known as Adelaide’s most recent coach, but he managed to play 132 games at the top level, winning a best and fairest with Eagles, while on the other wing, Ben Allan won a couple of All-Australians and a best and fairest in 145 games for the Hawks and Dockers. The midfield depth is not as great as some other areas, but Rowan Jones played 158 games and would be in the starting side if not already for a defensive midfielder in De Boer, while John Annear played 166 games in the early AFL era across three clubs. Michael Gardiner is the standout ruck across the AFL era after teaming up with Dean Cox at West Coast before heading to St Kilda.

The forward line might not have the same elite talls that the defence has, but that is taking nothing away from Peter Mann (116 games) who won the Dockers’ inaugural best and fairest and leading goal kicker award as a key position player. Joining him in that forward line is Hogan and Malaxos, while the three players likely to cause all sorts of headaches – Chris Lewis, Dale Kickett and Paul Medhurst – roam around in there too. Of the trio, Lewis was the most damaging, booting 259 goals in 215 games and no doubt would have won more than his 1990 best and fairest had he not been in such a talent-stacked outfit. Kickett won a best and fairest in 181 games, while Medhurst earned All-Australian honours for the Magpies after a strong 2008 season. Morton is on the bench ready for his chance to come on and impact, while Kingsley Hunter (100 games, 115 goals) is a key position forward who came close to making the starting squad.

There are some terribly unlucky players missing out from the Claremont squad, with Marley Williams (120 games) playing the most games to miss out. Other 100-games include Alistair Nicholson (110), Darren Kowal (105), Danny Southern (103) and Brett Jones (102). Among others just under 100 games and could have made the squad depending on your preference are Brad Wira (96 games) and Scott Chisholm (88). No doubt very soon Jack Martin will squeeze into the outfit, with Morton just having more runs on the board at this point in time. Travis Colyer is in a similar boat, nearing his 100th game, while Joel Hamling, Sam Petrevski-Seton and Mitch McGovern are others in line for a call-up in future years. Most recently, Jordan Clark could be one to watch right down the track after an impressive first year with Geelong.