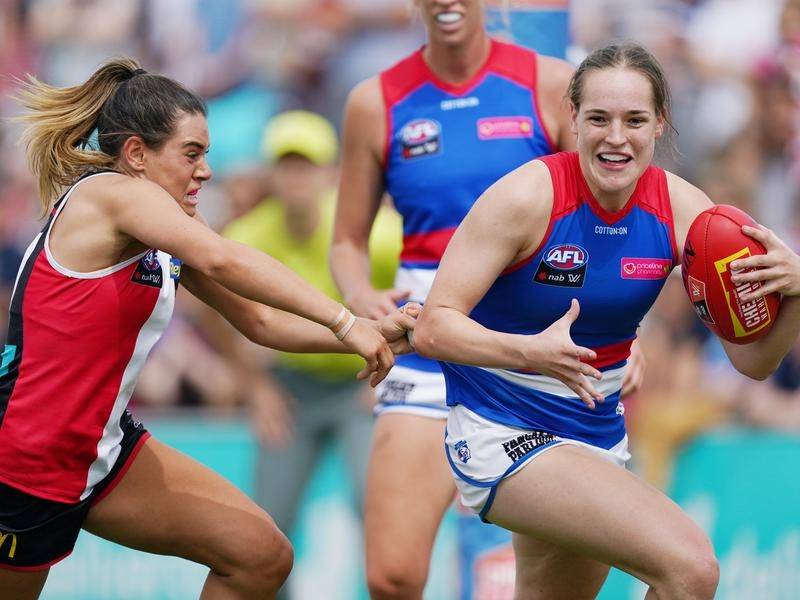 In this edition, we look number 19 in our count, an injury-prone Bulldog who finally had her day, and made it count with a huge season.

The number one pick in the 2017 AFL Women’s Draft finally got some well deserved consistency in her football, playing as many games in 2020 as she had in the previous season. Huntington racked up an average of 13 disposals per game, taking 4.8 marks and 3.4 rebounds, settling well at half-back.

Her transition from a centre half-forward to centre half-back was reminiscent of Collingwood’s Chloe Molloy who initially was drafted as a forward and then became renowned for her defensive work. Huntington’s season was one to remember, making the All-Australian side and winning the Rising Star Award at age 21.

To compare her seasons, she booted her disposals by 7.7, her marks by 2.5 and had a much greater impact behind the ball whilst still booting a goal – having only booted two majors last season in three games. Her game has gone to another level and she showed just why she was picked at number one.

With versatility to boot – Huntington can still go forward and have an impact – as well as a ranking kick, strength overhead and great football nous, she is someone who will only get better. After a few frustrating years with injury, it was terrific to see the talented tall get out and give Doggies fans something to be excited for in the future.

While the Western Bulldogs did not have the season they would have liked with just the one win, they showed the glimpses of the future with so many young guns on their list having an impact. Huntington is a huge part of that future and will be a centrepiece to build around in coming years.