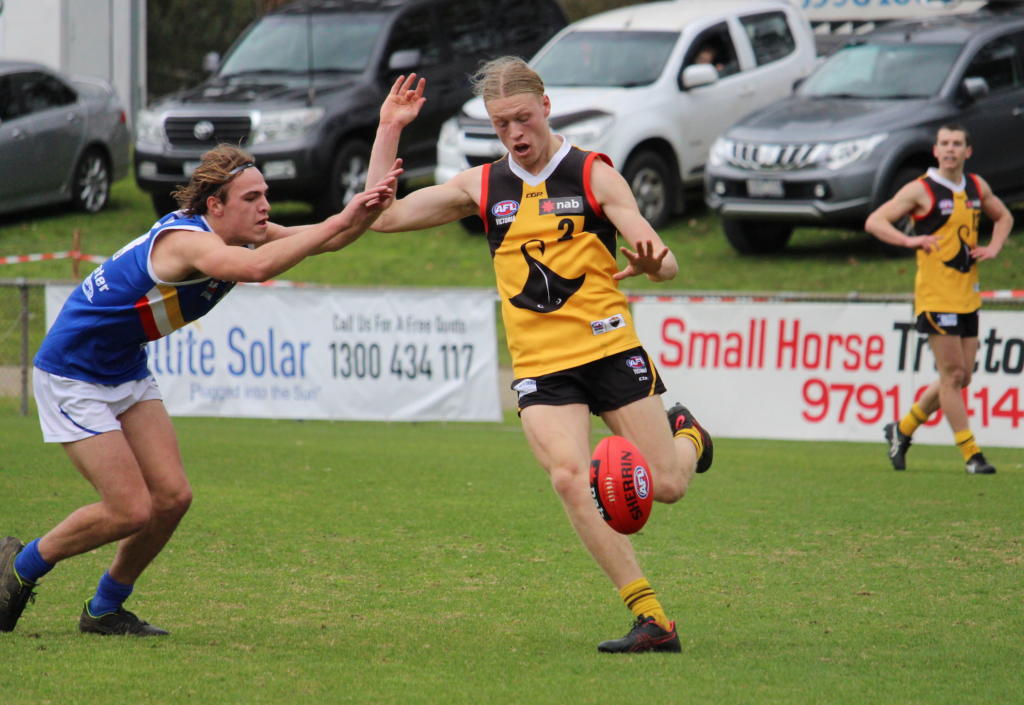 FANS, recruiters, and pundits alike were treated to another eight games in Round 6 of the 2019 NAB League, with the early-May weekend serving as the last for each of the five Northern Academies’ cameos. Reigning premier Dandenong broke clear as the sole undefeated side left, while Gold Coast was crowned the Academy Series victor via percentage after Sydney lost its only game for the season. A thrilling finals preview also went down as Gippsland and Eastern battled it out, with the Power getting the better of the eventual premiers on home turf.

The round kicked off in North Hobart, with Tasmania playing host to the heavily-depleted Oakleigh Chargers on Saturday morning. It was the visitors who managed to scrape home in a nail-biting, low-scoring slog by the slimmest of margins, overcoming a half-time deficit to keep the Devils at bay. Winning skipper Trent Bianco, the only national draftee afield dominated with 42 disposals as he stepped-up in the absence of some key personnel.

Fellow top-ager Josh May was also influential with 28 touches, while bottom-aged midfielder Fraser Elliot had it 23 times, and Thomas Lovell put in his best shift for the season with four majors. For the Devils, Harrison Ireland was named best for his work as an undersized ruck, with bottom-age gun Oliver Davis getting to work at ground level with a team-high 21 touches, and fellow Allies Hub member Sam Collins not far behind on 18.

The GWS Academy and Murray Bushrangers went to battle on the New South Wales-Victorian border at midday, with the GIANTS coming away with their second win from five attempts. It was a well drawn out win for the ‘away’ side in its home state, leading at every break but being made to earn the 11-point victory. In another game headlined by the dominance of a future draftee, Tom Green amassed 37 touches for the GIANTS in a mammoth performance.

Over-agers Jeromy Lucas (33 disposals) and Ed Perryman (31) were not far behind, while Harry Grant put in a big shift for 3.2 from his 23 touches, and 2020 19-year-old hopefuls Matt McGrory and Liam Delahunty also got busy. Green’s current GIANTS teammate Lachlan Ash collected 27 touches and booted a goal as Murray’s skipper, aided by Dylan Clarke and Cam Wild who matched his ball-winning output. Jimmy Boyer also impressed with three goals from over 20 disposals, while former GWS Academy member Charlie Byrne had 20 touches exactly.

Saturday’s final fixture took the competition back down to Victoria, as Calder and Bendigo met at Highgate Reserve. It was the Cannons’ day in another low-scoring affair, leading relatively comfortably at every break to eek out a 16-point win over the Pioneers on home turf. The leading Calder draft candidate to that point, Daniel Mott led the way with 36 disposals and a goal in a game which featured just two eventual draftees.

Jacob Martin enjoyed a breakout performance, racking up 36 touches of his own alongside Mott, while skipper Brodie Newman had 21 from defence and Carlton recruit Sam Ramsay had 16 on the same line. James Schischka was Bendigo’s leading ball winner with 20 disposals, with Sydney draftee Brady Rowles collecting his season-high haul of 17 in tricky conditions.

Heading up north to South Pine in the Sunshine State, Gold Coast took out the overall Academy Series with a well-earned 14-point victory over the Greater Western Victoria (GWV) Rebels. The visitors pushed the talented academy prospects all the way despite trailing for the game’s entirety, with captain and SUNS AFL rookie Connor Budarick capping off a stellar month with another terrific performance.

Completing the South Pine double-header were the Brisbane Lions Academy and Dandenong Stingrays, with the visitors claiming a resounding 71-point win on their travels up north. After a low-scoring first half, the Stingrays clicked into gear after the main break with 10 goals to one to comfortably ensure they would remain undefeated and atop the NAB League ladder.

A touch earlier and back in Victoria, the Geelong Falcons proved too good for the previously undefeated Sydney Swans Academy in their clash on neutral territory, upsetting the northern hopefuls with a 31-point win. The home side’s four-goal to one fourth term sealed the final margin, with the contest a touch tighter to that point.

It was the bottom-ager who stole the show in this clash, as Ollie Henry booted four goals for the Falcons alongside Charlie Brauer‘s two, while Braeden Campbell and Errol Gulden both managed 22 disposals and a goal each. Geelong captain Jesse Clark was the leading ball winner on the ground with 25 touches, followed closely by Sydney top-ager Sam Thorne (24).

Not much may have been expected of the Gippsland-Eastern clash coming into the season, but it proved to be a belting finals preview as the Power took out the four points in Morwell. The game was tight the whole way through, with the high-quality contest ending in a 10-point triumph to the home side.

As had been the case in previous fixtures, the cream rose to the top as Sam Flanders (25 disposals, two goals), Brock Smith (27 disposals), and Fraser Phillips (20 disposals, three goals) all enjoyed fantastic outings for the winners. The midfield trio of Zak Pretty (28 disposals), Lachlan Stapleton (28), and Mitch Mellis (21) was just as handy for Eastern, while forwards Bailey White and Ben Hickleton notched three goals apiece.

The final game of the round saw a seventh venue used in Ikon Park, as the Northern Knights held off a fast-finishing Northern Territory Thunder Academy. A six-goal third term saw the Knights double their goal tally, and it set up a match-defining margin as they went on to salute to the tune of 38 points. The NT’s campaign would finish winless, but not for a lack of trying and talent.

Josh D’Intinosante and Jackson Davies both had a good amount of ball while also booting two goals each for the winners, while 2020 Vic Metro Hub member Liam McMahon also managed two goals from his 15 disposals and eight marks. Ben Jungfer was the Thunder’s leading ball winner with 22 touches, but it was Malcolm Rosas Jnr who shone with 21 and two goals, while Joel Jeffrey found the ball 21 times, Beau O’Connell 19, and Brodie Lake 16.