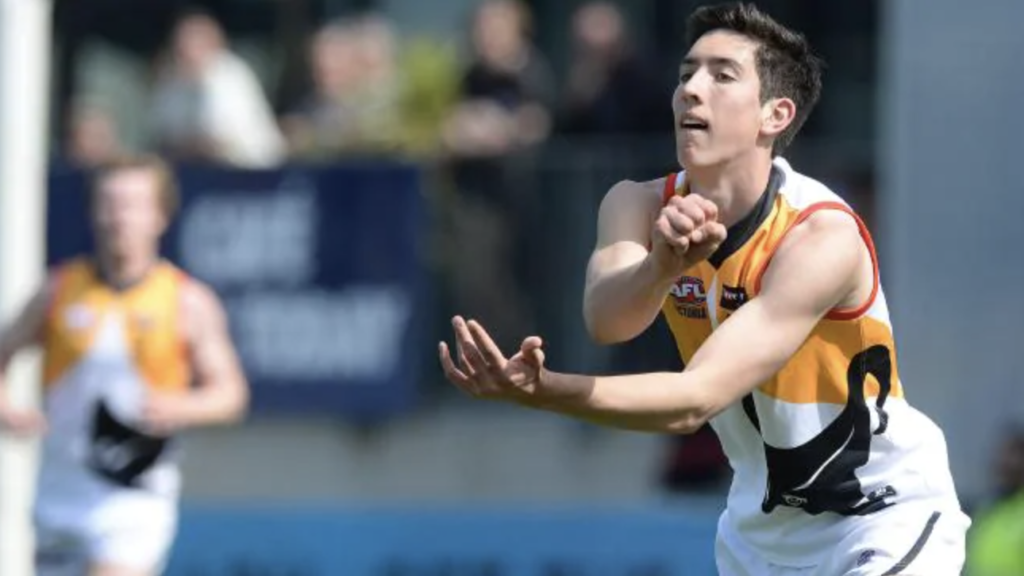 IF you are missing footy like we are, then let us somewhat salvage that with a look back in a new series of Classic Contests. In today’s contest we look at one of the would-have-been Round 7 clashes in the NAB League this year between the Dandenong Stingrays and Tasmanian Devils. In this edition, we wind back the clock to 2014, when the formerly-branded Tassie Mariners travelled to Shepley Oval for their first of four hitouts for the TAC Cup season.

Tasmania’s introduction to the 2014 TAC Cup season was a tough one, tasked with taking on a reasonably strong Dandenong line-up on the road in Round 8. The Stingrays’ depth was a telling factor around that time, boasting a handful of AFL-worthy top-agers, while also laying claim to an even bigger bunch of promising bottom-aged talent. Tasmania was in a similar boat but on somewhat of a lesser scale, still able to compete with a side of Dandenong’s ilk.

The home side came in with a 3-3 record, unable to manage consecutive wins over its first six games but in the same vein, not being consigned to consecutive defeats. A Round 7 loss to Eastern meant it was the Stingrays’ turn for victory, which spelt bad news for the incoming Mariners as they readied for their first of four TAC Cup appearances.

The likes of Bailey Dale and Jack Lonie led Dandenong’s 18-year-old brigade, with 2015 number one draft pick Jacob Weitering a standout in the draft class to come alongside Bailey Rice and Kieran Collins. For Tasmania, former Brisbane pair Josh Watts and Josh McGuinness took the field, while former Cat and new Bulldog Ryan Gardner also donned the Map as a bottom-ager.

A high-scoring first period of play saw Dandenong edge on top by eight points, with their superior high-end class helping the goals flow through. But the visitors were not there to make up the numbers, excelling in the following term with six goals to two to set up a 16-point lead heading into the main break.

It only worked to put a sting in the Rays’ barb, as the home side took full advantage of the scoring end to pile on seven goals and reclaim the ascendancy with a 32-point turnaround. The scoring pressure continued in the final term, with Dandenong managing another four majors to Tasmania’s two to round out a solid 26-point victory.

Dale was named best afield for the winners, booting 3.2 from his 21 disposals, with Lonie not far behind at 2.1 from 17 disposals. Taylor Joyce (5.3) and Jayden Tomkins (3.0) also bagged multiple goals to round out a terrific scoring effort for the Stingrays. Melbourne draftee Mitch White managed 20 touches and seven marks, while Weitering was outstanding with eight marks from 18 disposals alongside Rice (18 disposals, six marks) in defence, and Gach Nyuon worked well in the ruck for 25 hitouts.

For Tasmania, Josh Fox was prominent against good opposition in the ruck with 13 disposals, six marks, five tackles, 16 hitouts and a goal, while Caleb Hislop (32 disposals) and Tim Jones (30) racked up the pill. Nick Dodge and Mitchell Rainbird were the main goal threats with three goals apiece, while the draftees Watts (11 disposals, five marks, two goals), McGuinness (20 disposals), and Gardner (five handballs, seven tackles) all showed something.

The Stingrays would go on to finish seventh in the regular season, but made it all the way to the preliminary finals in an incredible post-season run, eventually falling to Calder. On top of their four draftees in 2014, they would also have seven in 2015, and a further two from the squad drafted in the future.

Tasmania did manage to pick up a win in its four-game cameo, trumping the North Ballarat Rebels in its final outing to finish as second-best among the state sides. The two Brisbane-bound draftees in 2014 were followed by three in 2015, including the re-drafted Mitch Hibberd and Gardner.