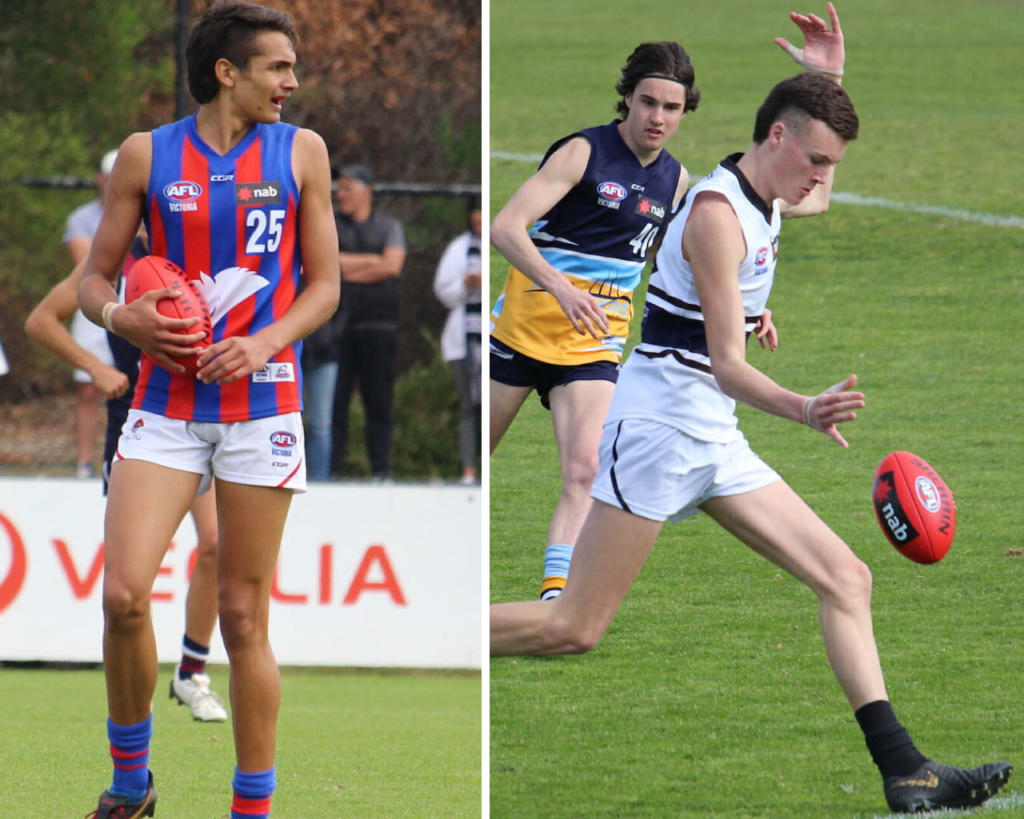 The series’ first edition features two of the most promising key position players available in NAB Leaguers Jamarra Ugle-Hagan and Nikolas Cox. A Western Bulldogs Next Generation Academy (NGA) product, Oakleigh’s Ugle-Hagan originally hails from Warrnambool, but boards at Scotch College in the Chargers’ region. While he has been utilised in defence while playing school football, the 18-year-old is more prominently known for his work as a high-marking key forward.

His potential foe, Cox is one of two Northern Knights products in this year’s Vic Metro Hub, and takes on the co-captaincy responsibility for his region in 2020. The 199cm utility has already won plaudits for his remarkable athletic traits and clean hands at all levels, with versatility another key string to his bow. Having played on a wing and as a key forward at times last year, Cox will look to secure a spot a centre half-back in his top-age season.

The pair’s similarly brilliant athleticism, aerial threat, and versatility make them an ideal match-up should they meet during the NAB League, national carnival, or beyond, while their raw talents more than account for the question of marquee status. With the contest teased as the respective talents went toe-to-toe in a preseason practice match, take a look at how the two compare statistically, athletically, and otherwise in our breakdown of their junior careers to date.

Ugle-Hagan shone at the 2020 NAB League preseason testing day, returning elite numbers across every test to only elevate his claim as frontrunner to be taken first off the draft board. While it may seem like Cox lags in comparison, his jumping numbers were outstanding and endurance figures elite for a player who almost tips 200cm.

The differences in either player’s game come through in the key base statistics, with Ugle-Hagan’s dominance inside 50 shining through, and Cox’s ability to impact around the ground also evident. During Oakleigh’s premiership-winning campaign, Ugle-Hagan was delivered silver service from a stacked midfield, and often proved too quick on the lead for his direct opponent. The spearheads’s clean hands and set shot routine would do the rest, hence the terrific marks and goals-per-game ratios.

On the other hand, Cox edged his opponent in the disposal stakes, while also earning a tick for his versatility in averaging at least one breach of either arc per game. That is a product of Cox playing on each line throughout the year, with his season-high haul of four goals a highlight in his time up forward. Just as capable in the air, Cox’s average of almost five marks is also handy, showcasing his own ability to dominate the airways around the ground.

The pair’s strengths line up well, with athleticism being the pillar of their games. That aside, Ugle-Hagan’s weapons lie in his forward craft; finding separation on the lead with his pace, and clunking strong marks hitting up at the ball. His high-marking ability makes him a constant threat inside 50, with the potential to break games open in elite patches of form.

Cox’s versatility is a strong asset, able to play virtually anywhere credit to his freakish skills on either side of his body, one-touch abilities in the air and below his knees, and again, that athleticism at 199cm. With all those features combined, it means Cox could be anything at the next level, with his potential as vast as anyone in the draft pool. Cox’s attitude and leadership also make for solid additions to his resume.

One of Ugle-Hagan’s main areas for improvement, and the only one listed here is his field kicking. While he often has little trouble finding the goals, he can be wayward at times and it only becomes more evident when he gathers the ball further afield.

A prime example would be in his Under-17 Futures All Star performance, where he leapt beautifully at the ball and intercepted well at half-back, but would often have a hard time finding targets up the ground. If he can refine that area, versatility could become another strength with ball retention important for playing in defence.

Cox’s areas for improvement largely come in his overall development, with his raw talent set to be honed in more specific areas this season. While being an everyman is always helpful to coaches, building the strength to become a true key position prospect will be key to finding a spot at the next level.

“Ugle-Hagan was one who didn’t do a whole lot throughout the course of the game, but always caught the eye when he was in possession. A few twists, turns, strong contested marks and clean pick ups were enough to suggest we may see a few more highlights from him in the future.”

“This kid has some exciting attributes. “It was no surprise to see the 197cm bottom-ager play for Vic Metro at the Championships, the talent is there for all to see. “He is almost freakishly clean for his size at ground and possesses a left foot that any 180cm footballer would be proud of… he moves with a bit style and is a player that everyone should be keeping tabs on over the next 18 months.”

For more on these two budding stars, including words from the men themselves, follow the links below.