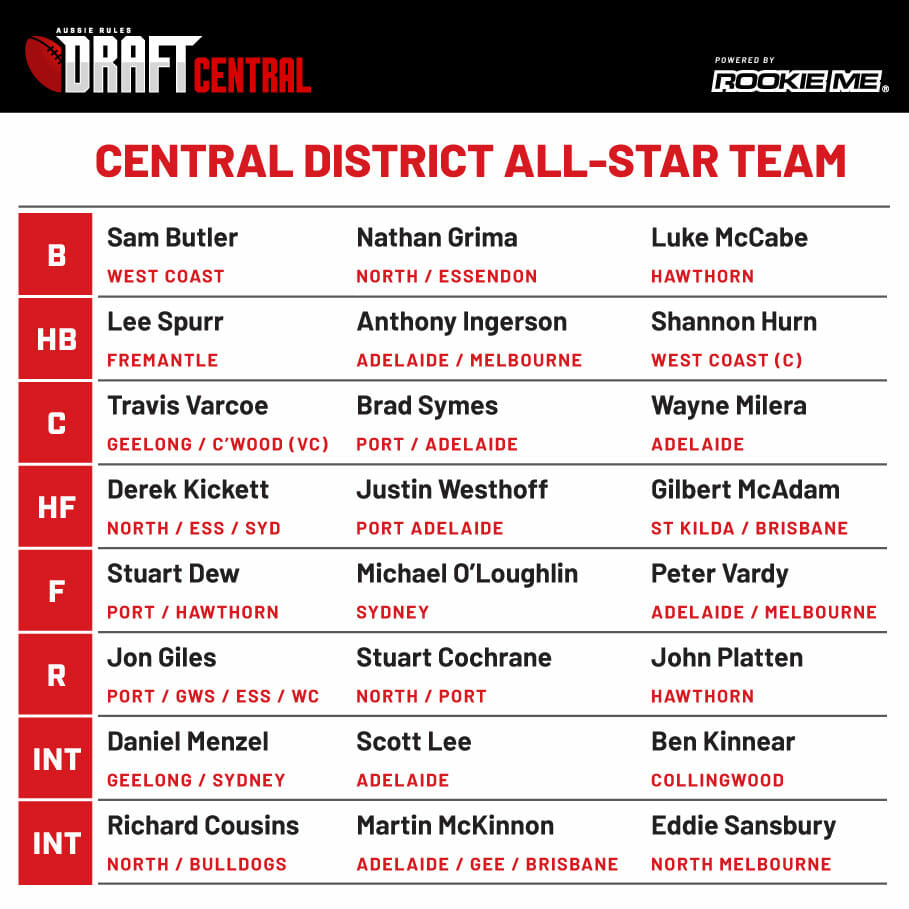 CENTRAL District has bred some of the most talented Indigenous players to ever grace the field over the years, from Swans legend Michael O’Loughlin to Magarey Medal-winning icon Gilbert McAdam. With more names such as the legendary John Platten to the modern day hero of Shannon Hurn, there is plenty of talent across the field. In fact, Hurn was the player voted by you, the fans as Central District’s Best Player of All-Time. He therefore earned the captaincy nod ahead of Travis Varcoe, who finished runner-up in our 16-man draw.

The Bulldogs have blooded 14 players to have played more than AFL 100 games, including six who managed in excess of 200 matches. The Central Districts team looks strong across the board, with a rugged, stingy backline complimented by a dangerous forward line headlined by a trio of key forwards. The midfield is perhaps the weaker of the three lines, but still features a Brownlow medalist. The ‘Dogs are one of South Australia’s most successful clubs and their best 24 is littered with talent.

The Central Districts backline has a strong Western Australian flavour, led across half-back by Eagles premiership skipper and Barossa Valley local Shannon Hurn. With 166 games under his belt, fellow Eagle defender Sam Butler was an obvious selection as a lockdown backman.

Cross-town rivals Fremantle are also represented in the Bulldogs side, in the form of rebounding defender Lee Spurr. A mature-aged rookie selection in 2011, the versatile Spurr played 120 games with the Dockers across seven seasons.

With limited key defensive prospects, the strongly-built Nathan Grima was a sure bet to feature at full back in the ‘Dogs best 24, having played 88 AFL matches with North Melbourne (86 games) and Essendon (2).

Luke McCabe‘s 138 games with Hawthorn ensured he featured in the side, whilst Anthony Ingerson assumes the role across centre-half-back, despite starting as a forward with Adelaide.

The midfield is headlined by South Australian football icon and Hawthorn great John Platten. The 1987 Brownlow Medalist is regarded as one of the best rovers the game has seen. With his trademark locks, Platten kicked 228 goals, won two best and forest’s, was a five-time All-Australian and won four premierships during his time with the Hawks.

The strongly-built Stuart Cochrane, who played 104 games at AFL level with Port Adelaide and North Melbourne, and versatile Brad Symes make up for Platten’s smaller frame, adding plenty of size to the ‘Dogs on-ball brigade.

Journeyman big-man Jonathan Giles was the logical ruckman, having played 63 games across four AFL clubs. Cat-turned-Pie Travis Varcoe and emerging Crow Wayne Milera provide the team with a plethora of speed and class from the wings whilst also possessing the ability to rotate through the forward line. Overall its a strong midfield, with a nice balance of in-and-under contested-ball winners complimented by flashy, outside ‘finishers’.

The forward line is perhaps the strongest line in the Bulldogs side, headlined by full-forward Michael O’Loughlin. ‘Micky-O’ is one of the most iconic Swans of the modern era, having kicked 521 goals in 303 games in the red and white. A dual All-Australian, best and fairest winner, premiership player and member of the Indigenous team of the century, O’Loughlin was the first name slotted into the Bulldogs side.

He is accompanied in the pockets by current coach of the Gold Coast Suns Stuart Dew. Clever around goal with a booming left foot kick, Dew kicked 265 goals in 206 games with Hawthorn and Port Adelaide, winning flags with both clubs.

Power veteran Justin Westhoff is renowned for his lanky frame, iconic beard and outstanding athleticism which allows him to play almost anywhere on the park. The 268-gamer earns a spot at centre-half-forward in the ‘Dogs best 24, but could easily rotate with Milera or Varcoe when desired.

The great thing with these key forwards is that they possess contrasting styles and thus provide a nice balance. Crows fans will no-doubt remember 1998 premiership hero Peter Vardy, who adds a touch of magic to the Bulldogs offence.

Derek Kickett was selected on the opposite flank, having booted 179 goals in 152 matches with Essendon, North Melbourne and Sydney. Gilbert McAdam is perhaps best known in South Australia for winning the 1989 Magerey Medal, but his 111 games and 89 goals at AFL level made him a clear-cut choice at half-forward.

The Bulldogs have a couple of very handy players on the pine, who could very easily have cracked an on-field position in many teams across the nation. Despite his injury woes, Daniel Menzel kept scoreboard operators busy during his 73 games at the Cats and further adds to an already-deadly forward line.

Central’s great and inaugural Crow Scott Lee provides a handy bench option either as a lockdown back pocket or strongly-built on-baller. Former-Magpie Ben Kinnear and ruckman Richard Cousins add much needed key position depth in a team lacking some height.

Martin McKinnon, the Crows’ first ever draft pick, provides some x-factor to the side with an ability to play either tall or small at 189cm. The cousin of Michael O’Loughlin, Eddie Sansbury rounds off the side, providing further depth on-ball and up forward.