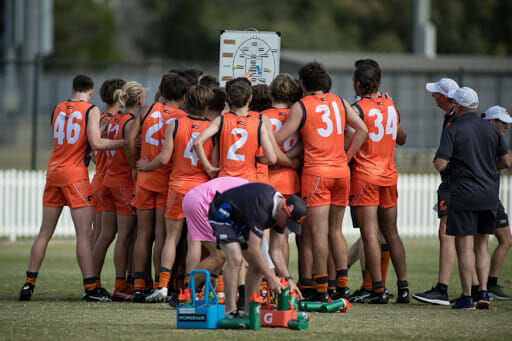 IF you are missing footy like we are, then let us somewhat salvage that with a look back in a new series of Classic Contests. In today’s contest we look at one of the would-have-been Round 7 clashes in the NAB League this year between the Murray Bushrangers and GWS GIANTS Academy. In this edition, we wind back the clock only one year to 2019, when the two sides met for the first official time in the NAB League competition.

In a battle of the border, Murray Bushrangers took on the GWS GIANTS Academy having had a number of players who represented both sides over the years. A perfect example was Nick Murray on the GIANTS’ team as the overage had played for the Bushrangers in defence for the years prior. Heading into the match, neither team had set the world on fire, having both played four games and won just one, with the Bushrangers holding a 12 per cent lead over the GIANTS in 13th to 14th on the NAB League Boys ladder. The two players touted as top 10 picks coming into the match were Bushrangers’ Lachlan Ash and GIANTS’ Tom Green who both would end up in the orange and charcoal by year’s ned.

Green made an early statement with a strong mark and goal two minutes into the contest, in what would be a rare appearance up forward. With Harry Grant converting the first of what would be three majors, the GIANTS raced out to a 13-point lead midway through the quarter before Jimmy Boyer and Hudson Kaak broke the Bushrangers’ drought with back-to-back goals in 90 seconds. The visiting team kicked away again with two goals in the last five minutes to lead by 13 points at quarter time.

The Bushrangers needed a response early, and like Green in the first term, this time is was Ash who stepped up with a big goal to give his team confidence. After a couple of near misses, Boyer booted his second of the game to level the scores. Liam Delahunty and Jye Chalcraft traded goals before Grant found his second and the GIANTS had a seven-point buffer at the main break.

Josh Green and Jeromy Lucas booted the first two goals of the term as the GIANTS dominated the third stanza of the match, leading by as much as 22 points at one stage, with 2.3 to 0.0 on the board. Luckily for the Bushrangers, they managed to grab some momentum back going into the final break as Kaak and Mitchell Holt found the big sticks. With the deficit back to a manageable 10 points, it was well and truly game on in the final term.

GIANTS’ Lucas Conlan kicked the all-important first goal of the term, before Chalcraft capitalised with his second and the margin was back to 13 points. A couple of misses and then a third Grant goal had the GIANTS back out to a 20-point lead with 15 minutes left on the clock. With a scoreline of 10.15 inaccuracy was an issue for the visitors despite the solid advantage. Lachlan Sykes kept the Bushrangers hopes alive with an important goal, but back-to-back misses, this time from Ash and Chalcraft left Murray with some work to do at 11 points down. With seven minutes remaining, Matthew Hamblin booted his second and the game was as good as done with a couple of late goals to Cam Wilson and Boyer either side of Conlan’s second was not enough to get their side over the line.

It was no surprise to see Tom Green at the top of the disposal count with a mammoth 37 touches, 11 clearances, three marks, five tackles, five hitouts, two inside 50s and a goal in a best on ground performance. Lucas was not too far behind with 33 touches, seven marks, five tackles, four clearances, five inside 50s and a goal, while Ed Perryman picked up 31 disposals, nine marks and six rebounds out of defence. Up forward, Grant booted three majors from 23 touches and eight marks while laying eight tackles, as Liam Delahunty was busy with 21 disposals, seven marks, three tackles, seven inside 50s and a goal. Murray had five rebounds from 10 touches and four marks against his former side, while Conlan and Josh Green both booted multiple goals.

Ash was one of three players to record the most disposals, teaming up with fellow midfielders, Dylan Clarke and Cameron Wild. All three had 27 disposals, and combined for 13 marks and eight clearances. Ash also had the five inside 50s and a goal, while Boyer was the most lively in the forward half with three majors from 22 disposals, five marks and three clearances. Sam Durham (22 disposals, four marks, six tackles, four clearances and five inside 50s) and Charlie Byrne (20 disposals, three tackles and nine rebounds) also found plenty of the ball, while Chalcraft (14 touches, four marks) and Kaak (eight touches, three marks) booted two goals each.

The win was the GIANTS’ last match in the Academy Series, finishing with a 2-3 record, while the Bushrangers would go on to finish ninth, only to narrowly bow out to Dandenong Stingrays in Wildcard Round.