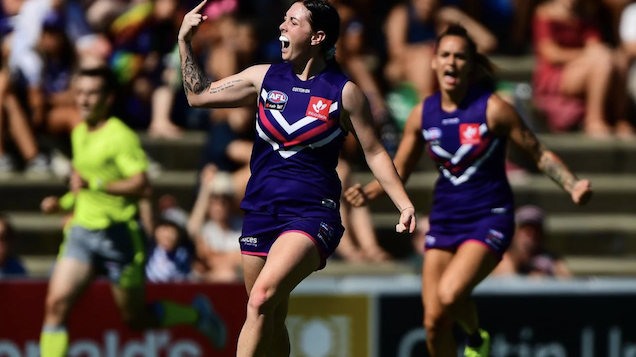 In this edition, we look at the players ranked from 35-31. This part of the countdown leans more towards forwards with a couple of Queensland representatives and a pair of Fremantle Dockers not to mention a Carlton youngster. Check out who made the cut below.

The 20-year-old left her mark on the competition, consistently working hard for the Blues and often unfazed by the bigger bodies in the competition. She played every game of the season and while she did not rack up a stats filling performance week in week out it was her pressure acts that made her really stand out. Despite her small stature – only standing at 160cm – Gee was hard at the contest laying an average of 3.6 tackles per game, testament to her go-get-it nature. Gee was clean with ball in hand and was not afraid to use her signature burst of speed to try and evade her opponents, proving to be an integral member in the Blues charge to success.

Houghton is just one of many Fremantle players that enjoyed a run of hot form with the 26-year-old hardly missing a beat in the Dockers rise up the ladder. Unlucky not to win a flag given the circumstances, Houghton showed why she is one to watch with her dashing pace and strength in the air to take the ball at full-flight. She was a constant threat inside the forward line for Fremantle constantly looking for a flying shot at goal and most importantly creating opportunities for teammates with an average of 3.1 inside 50s. She imposed herself on the contest, working hard to win the footy at the coalface while also displaying her versatility chipping in the ruck when needed.

In her third season at the club and first since rupturing her anterior cruciate ligament (ACL) last year, Conway made sure she came back with a bang.  A spirited Round 1 win and strong performance over the reigning premiers proved just how much she had to offer racking up 14 touches and six tackles. The 21-year-old continued to bring plenty of fire to the contest with her physical pressure on display, laying an average of 4.4 tackles per game. Standing at 170cm, the Brisbane Lions youngster imposed herself at the contest with her flashes of speed and silky ball movement. Although she did not constantly blow away the stats column it was her consistency and ability to butter up and execute the small things that made Conway such a dominant and explosive force for the Lions.

Fellow Fremantle forward Sabreena Duffy also impressed throughout her 2020 campaign taking home the leading goal kicker award for the club. Although she is only 165cm the 20-year-old forward has an uncanny knack for finding the big sticks and slotting them through with an average of 1.7 goals per game and a total of 12 for the season. She is quick on her feet, able to evade oncoming traffic and most importantly can convert under pressure. Her ability to lead up at the footy and create space caused havoc for opposition defences something the Dockers well and truly relished in all of their outings. Duffy proved to be the key up forward on more than one occasion for Fremantle with the youngster providing options inside the forward arc and applying a wealth of pressure to trap it inside their attacking end.

After spending time with the Lions and failing to make a splash, Kalinda Howarth well and truly stepped up to the plate proving to be that go-to player inside the forward 50 for the Gold Coast SUNS. Howarth did not disappoint up forward for the new side with the 170cm tall gobbling up everything that came her way and most importantly hit the scoreboard thanks to her relative accuracy. The priority signing for the SUNS proved to be just what the doctor ordered with her slick ball skills and strength to take a mark even in a contest. Her second efforts also shone through with the talented footballer working hard at ground level to apply tackle pressure while also winning her fair share of the footy. Howarth starred in the Round 3 match against state rivals Brisbane nailing three majors to go with her 10 touches.