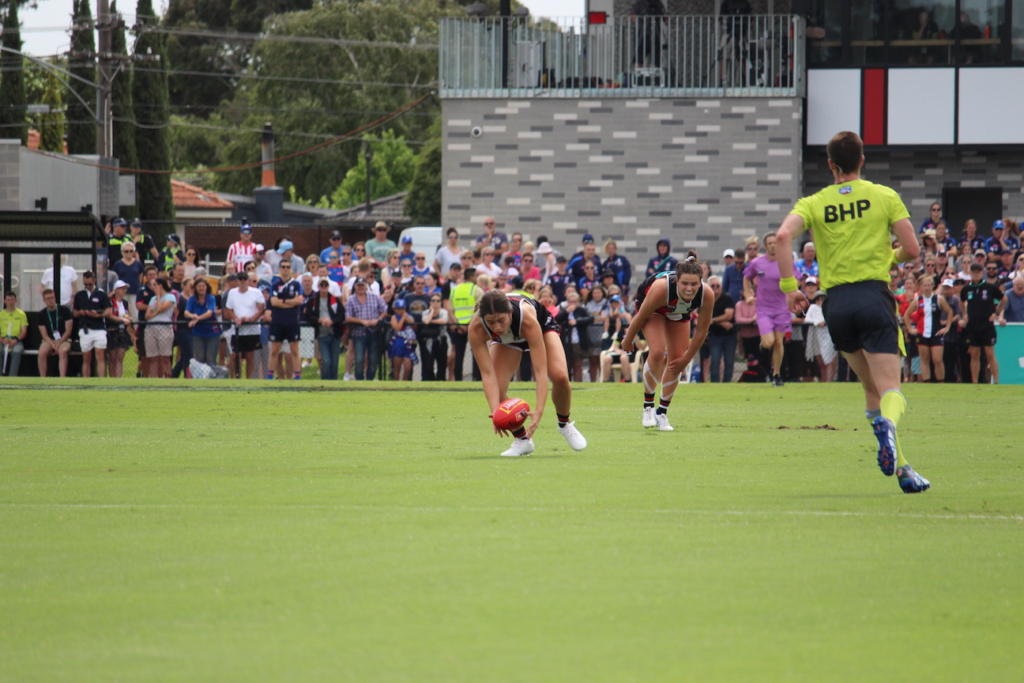 In this edition, we look at the players ranked from 30-26. This part of the countdown features a couple of young gun debutants alongside some of their experienced counterparts, namely from Carlton and St Kilda.

One of the most recognisable names in women’s footy, Tayla Harris proved she still has the ability to step up her game along with the competition, raising her stats averages across the board from last season and forming a critical part of a threatening forward line for Carlton. A handy option both in the air and in front of goal, Harris is a crucial part of the Blues’ forward unit thanks to her strength and constant drive for the ball, and forms a massive target for her speedy midfield to bomb the footy to. It’s hard to believe Harris is still only 23-years-old, with her age thus far outweighed by her skill and plenty still left in the tank. Harris equalled her season best goalkicking for the year, replicating her 2019 tally of eight majors – from one less game – while her disposal average was raised by 2.5 touches. Able to work up the ground, Harris’ ability to anticipate the play and use her clean hands and leap to mark the footy gives her a big leg up on her opposition.

A young gun with a drive to go one better every time she gets hands to ball, Grace Egan was a great pick up for the Blues at pick number 13 and well and truly proved her worth in her debut season. With an average of 14.3 disposals, there is not much to complain about with the 19-year-old adjusting to AFLW level with ease, putting her good contested ball use and run and carry on show. Unafraid of the contest, Egan averaged almost five tackles per game, showcasing her tenacity week after week. Her best performance on paper was back in Round 2, racking up 11 tackles to go with her 18 touches against the Magpies, but it was her constant work rate that leads her to a spot on our countdown.

Debutant Caitlin Greiser was the name that many teams would have been grumbling about after taking on the Saints, and given her ability to take the footy and boot goals with ease. The 21 year old put a score on the board in every match, booting multiple goals on four occasions and winning the Leading Goalkicker award for 2020 thanks to her ability to evade her opposition and use her strong build to barrel through the pack into the open goal. While her disposal efficiency sat just over 50 per cent, Greiser was more than happy to stay home inside 50, able to cleanly get ball to boot to threaten the scoreboard time and time again, using her strong mark and overall accuracy in front of the big sticks to her advantage.

Another youngster who made her mark in her debut season was Georgia Patrikios, with the speedy midfielder forming a crucial part of St Kilda’s inaugural team thanks to her excellent agility and use of the footy. With a clever footy brain and clean hands to match, Patrikios did not let her smaller 169cm frame stop her against bigger opposition, using her speed and footwork to evade her opposition and clear the ball with ease. Able to have an impact both on and off the ball, Patrikios was a consistent threat around the footy, able to get into the pack and take on some of the pressure, willing to contest and do so constantly. Clean and composed with ball in hand, Patrikios’ start to her AFLW career proves she has plenty more success in her future.

The oldest player on this part of the countdown – and still only 25-years-old – Bri Davey has been an impressive name in the AFLW since its inception but well and truly lifted her form another peg this year. After defecting from Carlton at 2019 seasons end, Davey dominated in a much stronger Collingwood outfit in 2020, bolstering the Magpies’ ranks with her ability to come in and make a difference on the game with ease. Much like Harris, Davey’s stats rocketed this season, playing only the six games but averaging over 20 disposals thanks to her constant drive for the footy and ability to snatch it up and clear it into space. Davey collected 30 touches and racked up 10 tackles in her clear best performance of the season in Round 5, but was as consistent as they come for the Magpies who played their first finals match this season.