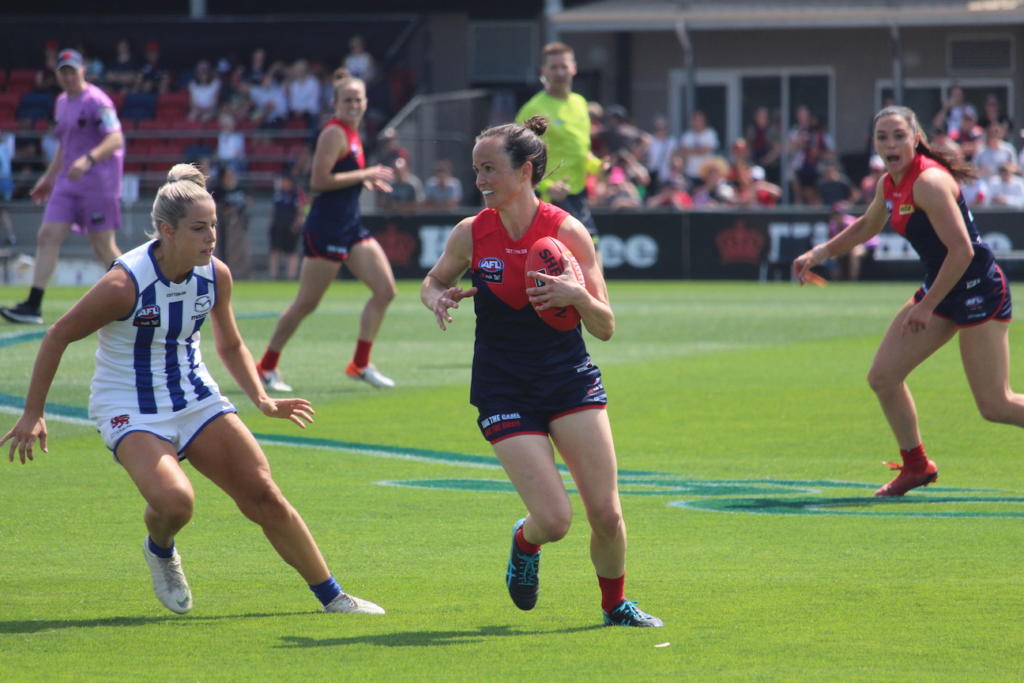 In this edition, we look at the players ranked from 25-21. This part of the countdown features some exciting stars who have not yet hit their peak despite playing some exceptional footy thus far, bookended by a couple of experienced marquee names who continue to impact the competition.

The 31-year-old Daisy Pearce returned to the game in 2020 to much fanfare after giving birth to twins last February, doing the impossible and ultimately returning to her pre-baby form – albeit in a different position. Playing off the half-back, Pearce bolstered the Dees’ stocks with her speed and intensity in defence, teaming up with Libby Birch to make a formidable defensive wall. With just under 70 per cent disposal efficiency, Pearce led from the back with her silky ball movement and vision up the ground. While Pearce’s numbers may have dropped this season, it was  somewhat down to her change in role, slipping into the defensive mindset well and becoming a general off the half back. Her resilience to get back on the field is remarkable while her read of the play was crucial coming into Melbourne’s inaugural finals series this season.

Chloe Molloy’s return to the footy field could not have been better, with the talented 2017 draftee pulling on the boots once more and showcasing her skill from the very start of the season. Booting six goals in seven games – including a bag of three against the Bulldogs in Round 5 – Molloy had no issue finding the footy, averaging 13.3 touches and providing a confident and reliable marking target up the ground thanks to her ability to free herself from her opposition or crash the pack. Her consistency and ability to get hands to the footy enabled her to set handy plays in motion for her teammates while her run and carry down the ground and impressive vision allowed her to be a real thorn in the side for any team she came across.

The talented Dees forward had a spectacular year, rounded out by a Goal of the Year Award that was testament to her constant drive inside 50 and ability to apply pressure both on the player and the scoreboard. Migrating further up the field in 2020, Kate Hore was one of a number of Demons who had no issue with accuracy in front of the big sticks, and was a handy target up forward able to have an impact both in the air and at ground level. In her best season yet at the club, Hore boosted majority of her stats this season – namely booting four more goals than her 2019 form – and racked up 3.9 tackles per game proving she is a constant threat in and around the footy, unafraid of the contest and able to crumb the ball with ease to her advantage.

Richmond backliner Monahan made the switch from GWS GIANTS ahead of the 2020 season and with the numbers she racked up this season there is no doubt that she flourished in the Tigers environment. The 26-year-old racked up an impressive 6.8 rebounds for the season to go with almost three marks as she put in her best effort to block the footy from entering the Tigers’ back 50. While Richmond did not win a game in their inaugural season, without Monahan’s link from the back end up the ground the results could have been far worse, with the speedy contested player working well through congestion to average 17.2 touches, driving through the midfield to propel the footy forward. Monahan’s form saw her blow her 2018 and 2019 form completely out of the park, playing all six matches for the Tigers and racking up the numbers as she did so.

With an average of 17 disposals across her AFLW career, Western Bulldogs captain and stalwart midfield-forward Ellie Blackburn is as consistent as they come. She continued her impressive form since the AFLW’s inception with another stellar season behind her, albeit a frustrating one for Bulldogs fans with the side only managing one win from its six matches. The impressive ball-winner continued her winning form however, and was a constant threat with ball in hand thanks to her ability to make something out of nothing and transition the footy through the midfield with ease. Blackburn is rarely fazed by the contest, and while she only put the two goals on the board this season, she put her ball-winning skills to good use in other areas, aiding her teammates and forming a crucial link through the midfield. Her tackling pressure also releases some of the load from her teammates, with her 4.2 tackles per game and 2.2 marks creating opportunities further up the ground.