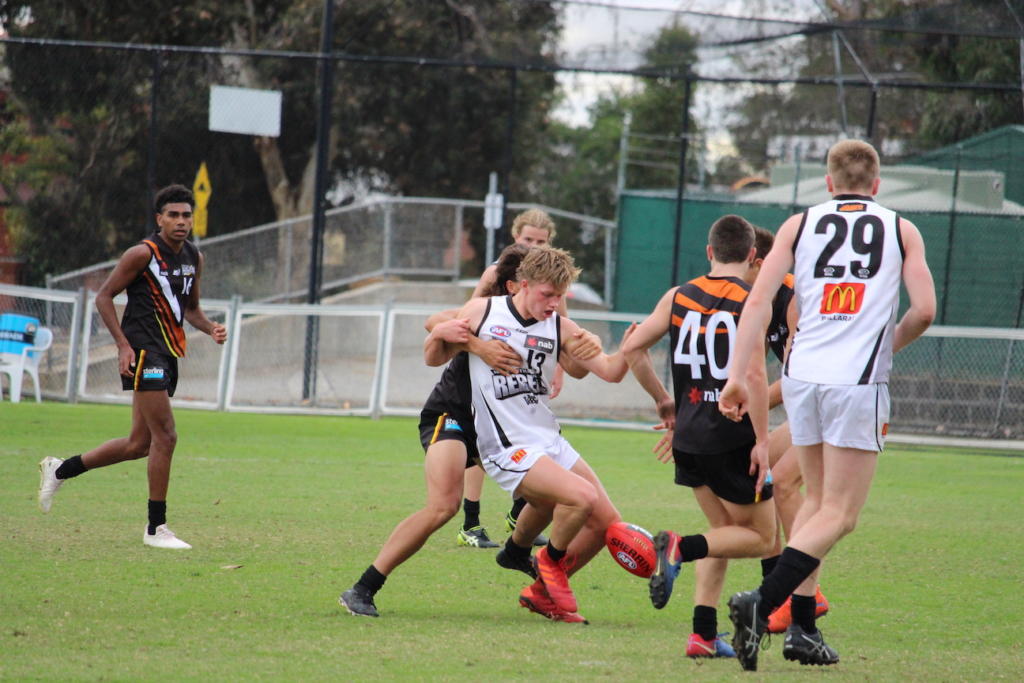 IF you are missing footy like we are, then let us somewhat salvage that with a look back in a new series of Classic Contests. In today’s contest we look at one of the would-have-been Round 7 clashes in the NAB League this year between the Greater Western Victoria (GWV) Rebels and Northern Territory (NT) Thunder Academy. In this edition, we wind the clock back just over a year when the two sides met for the first time in a one-sided clash at Windy Hill.

A historic fixture was set for Round 5 of the NAB League as GWV and NT readied to do battle for the first time since the Thunder’s reintroduction to the competition on a part-time basis. It would go down on neutral territory, with the Country side playing host at Windy Hill to the further-travelling Territorians.

The Rebels came in sat in 12th on the back of a 1-2 record, but it could have easily been 3-0 with their two losses coming by a combined 13 points – split by a one-point win over Geelong in Round 2. The Thunder Academy had a much tougher time of it at 0-3, with its average losing margin sitting at 54.3 points across the three games despite boasting a load of exciting talent.

Speaking of, either side would lay claim to a single future draftee each, with Collingwood slider Jay Rantall running out for the Rebels in his emergence through midfield, while Gold Coast rookie Malcolm Rosas Jnr would make his first appearance for the season. Current SUNS NT zone hopefuls Joel Jeffrey and Brodie Lake also took the field as bottom-agers, with National Championships representative scattered across both line-ups.

Starting as they wished to continue, the Rebels broke out to a massive 55-point first half lead thanks to a six-goal to nil second term, with goalkickers coming from across the board. It followed their four-goal effort in the opening period of play, working to overwhelm the Thunder and making it difficult to see a turnaround eventuate.

But that did occur to some extent, with the visitors banging through five goals to three in a more spirited third term and finishing the second half with 7.4 – the same amount that the Rebels would manage. While the margin had shot out to as much as 61 points, 55 was the closing deficit for NT as it went down again by around that average mark of 54.

There were nine individual goalkickers for the victors – including six multiples – as Nick Caris led the way with his four majors. 19-year-old Matty Lloyd had a team-high 28 disposals and two goals, followed closely by Rantall’s 27 and two effort. Riley Polkinghorne, Toby Mahony and Cooper Craig-Peters were others to find both the ball and the big sticks, while 2020 over-age hopeful Isaac Wareham had 16 touches, and ruckman Patrick Glanford was named best for his 24 hitouts against good opposition.

Despite flashes of good form and some individual brilliance, the NT played on to a 0-5 record in its NAB League cameo, finishing last of the Northern Academies. GWV only managed to add another four wins for the season to finish 10th, but were well represented in the Vic Country squad.