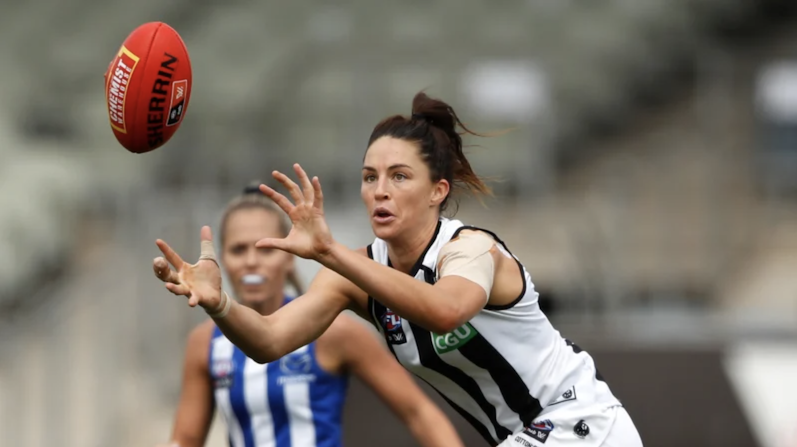 Swanson proved the perfect partner-in-crime to West Coast star Dana Hooker upon making the switch over from GWS to the incoming Eagles, leading her side for clearances, metres gained, and inside 50s at the end of a terrific 2020 campaign. It was arguably the midfielder’s best season since debuting for the GIANTS back in 2017, and the 25-year-old seems to really be hitting her prime now. Swanson was also one of the Eagles’ best in their lone win for the year, collecting a season-high 22 touches and one goal to help her side upset the Bulldogs in Round 4.

An uncompromising key defender, Livingstone returned another consistent campaign as the leader of Collingwood’s back five. Her experience and competitiveness proved vital as the Pies made a run for finals in the absence of Ash Brazill, taking on the opposition’s best key forward each week with little fuss. Of course, few could forget the job Livingstone did on Carlton gun Tayla Harris in Collingwood’s first ever win over its arch rival, with her no-frills game the perfect counterpart to many a high-flying spearhead. Despite missing out on a spot in the final All Australian side, Livingstone is one of the league’s finest defenders.

Allan’s steady rate of improvement over her four-year AFL Women’s career culminated in a season good enough to earn All Australian recognition, with the 22-year-old slotting into the last line of defence after also being named in the 22 Under 22 team. The reliable key defender was again a calm influence in the Crows’ back half, working well on all levels without possession, while also leading her side in disposal efficiency with ball in hand. Allan started the year off with a bang against Brisbane, collecting a season-high 18 disposals, while her seven-mark performance against GWS was also memorable – despite the losses.

Melbourne’s boom recruit coming into season 2020 was Birch, who justified the hype and price paid with another outstanding season at the top level. The classy defender led her new side for intercept possessions, reading the play typically well across half-back and using her athleticism at 175cm to provide good fold both in the air and at ground level. Some of Birch’s best numbers for the year came in Melbourne’s epic finals win over GWS, as she collected 15 disposals (13 kicks) and clunked five marks to prove her big game experience at just 22 years of age. Remains one of the many former netballers to have made a seamless transition to football.

Speaking of former netballers, Layton improved out of sight to become one of the competition’s prime rucks in 2020, cementing a starting spot in the All Australian side. The 188cm cross-coder backed up a promising VFLW campaign with a stellar effort at the top level, finishing second in the league for total hitouts and adding strings to her bow by also hitting the scoreboard on three occasions. Layton’s marking and follow-up work were also key features of her impressive game throughout the year, with her talent how catching up to her towering frame.