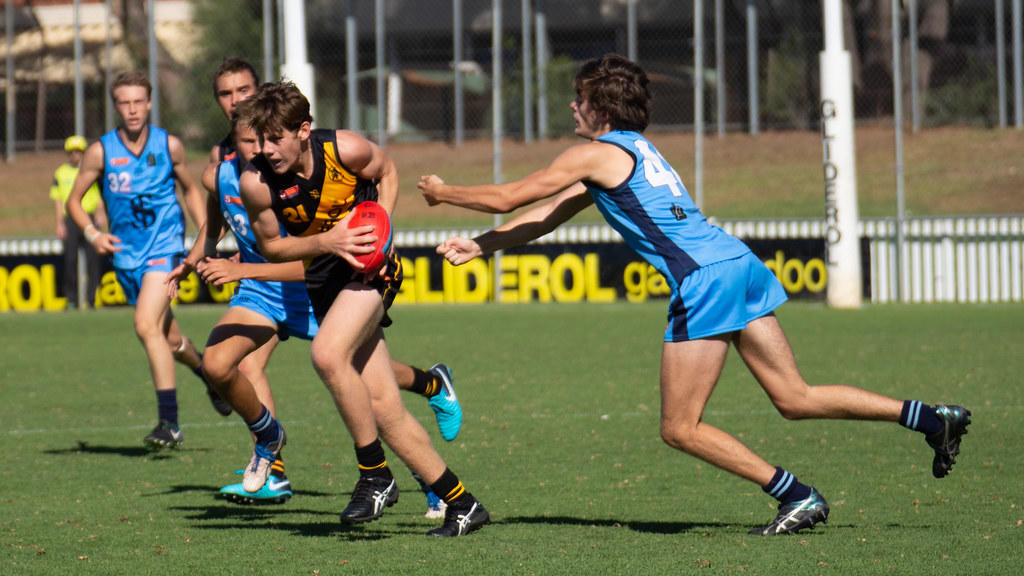 IN the build up to football eventually returning, Draft Central  takes a look at some of this year’s brightest names who have already represented their state at Under 17 or Under 18s level in 2019. While plenty can change between now and then, we will provide a bit of an insight into players, how they performed at preseason testing, and some of our scouting notes on them from last year.

Next under the microscope in our AFL Draft watch is bustling Glenelg key forward Kaine Baldwin, who comes into his top-age year somewhat untapped after going down with an ACL injury in his first outing for 2019.

That game came at the Reserves level for Glenelg, with the highly-touted youngster showing enough during an impactful Under-16 campaign with South Australia, and then back at The Den to warrant selection.

Baldwin is renowned for his contested marking and attack on the ball in flight, crashing packs with his big frame and sticking marks with his strong hands. But the soon-to-be 18-year-old has more strings to his bow than pure brawn, with his ability to push further afield making him a true modern day key forward.

Being a touch under the standard key position height at 193cm, Baldwin is now looking at potentially expanding his game with midfield craft as he continues his journey toward recapturing the form which thrust him onto the AFL draft radar in 2018.

2020 Goals… “I think my main focus is just the championships, especially because that’s pretty early – I’ll only really have a month or two of footy under my belt before that. Hopefully I can perform well there and we can get a win as a team as well.”

Potential role change… “I’d really like to keep working (as a key forward) and see how I go with that, but also to start looking at some more midfield craft as well being a bit shorter than maybe some more natural key forwards.”

Rehab… “I’ve been working through my rehab with my ACL and progressing as my physio and doctor tell me, so I’m pretty excited to get back and probably looking for a return early in the year.”

Baldwin was another who had a greater impact than what his stat-line would suggest. His contested marking overhead was outstanding; both deeper forward in the first half, and higher up the ground as the game wore on. Baldwin found his way into the game in the second term when he booted his lone goal and missed the chance to add another within a minute. He continued on with an assist to Zac Dumesny in the third term before clunking a couple more contested marks to finish the day with seven overall among 15 disposals.