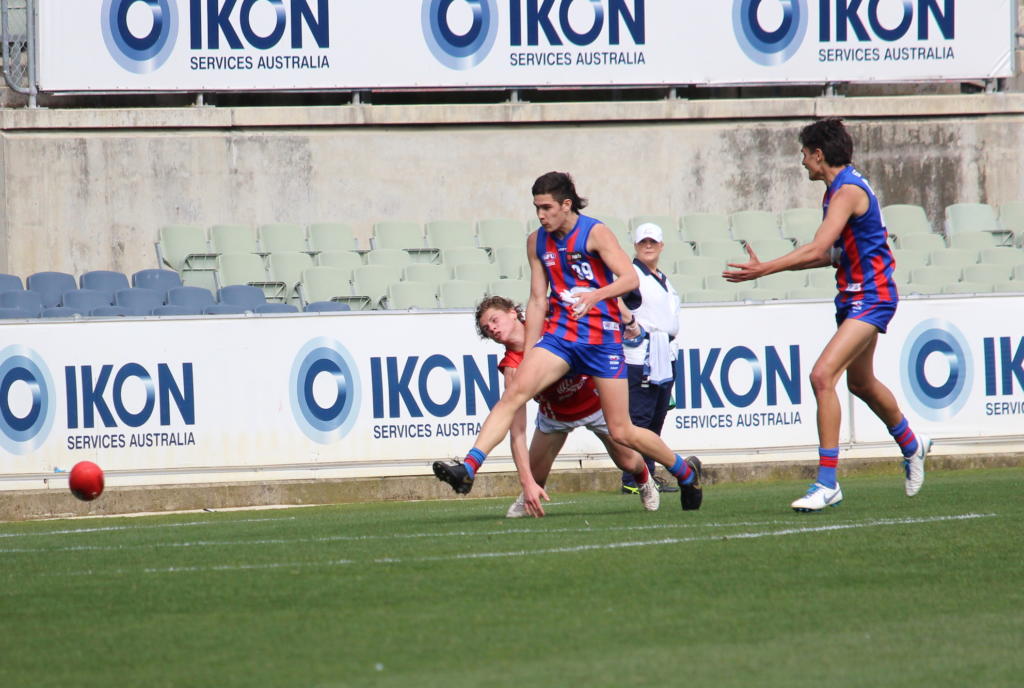 AS the postponement of all seasons commenced over the last few weeks, we head back to the pre-season where we sat down with a number of athletes across the country. In a special Question and Answer (Q&A) feature, Draft Central‘s Michael Alvaro chatted with Oakleigh Chargers’ Reef McInnes at the NAB League Fitness Testing Day hosted by Rookie Me.

The well-built inside midfielder/forward is also part of Collingwood’s Next Generation Academy (NGA), setting him up well to follow in the footsteps of graduates Isaac Quaynor and Atu Bosenavulagi as examples of the programs’ success, and the connection between Oakleigh and Collingwood.

While he was forced forward in 2019 due to the Chargers’ stacked midfield options, McInnes is primed to use all of his 192cm frame back among the engine room this season should he get on the park. A stress reaction in his back was the only blight on his pre-season, with the youngster raring to go should football make a return.

Having stepped out on Grand Final day for the Under-17 Futures All-Star showcase, and played a part in Oakleigh’s premiership side, McInnes is already well versed in performing when it counts and looks likely to be a key figure for each side he suits up for in 2020.

MA: Reef, it looks like you’re sitting out the testing today, what have you picked up?

RM: “Yeah, unfortunately I’m not testing today, obviously it’s still just my back issue. “I’m fully healed now which is good to see but just not really risking it today with Round 1 coming up. It’s unfortunate.”

Other than the stress reaction, have you come up pretty well in the pre-season?

“Yeah. I got diagnosed with the stress fracture a couple of months ago but now since being put through the rehab it’s healed and (feels) a lot better which is beneficial for me so I’m looking forward to it.”

You were really impressive in your bottom-age season, what kind of a base has that given you now for your top-age year?

“I really enjoyed my bottom-age year. “Just being around some of the big names who got drafted last year. It’s just been a good experience being able to have that opportunity, and going through different programs like Vic Metro. “I’m just excited to see how the year goes and what’s ahead for me.”

With the stacked engine room last year, you got pushed out to the flanks – are you looking forward to getting back into a midfield role?

“I’d love to. “Midfield I think is my best position but honestly, wherever the team needs me I guess, I’m happy to play there. “But obviously midfield, I’d love that.”

It must be great to have some mentors like Isaac Quaynor at the Collingwood Next Generation Academy?

“It’s been awesome. “Just being able to associate with a couple of the coaches there, to have that experience to train with the AFL club and all that has been awesome. “Especially Isaac, knowing him personally as a mate of mine, he’s been able to guide me through and it’s been really beneficial. “Same with people like Will Kelly, those sort of boys it’s been really helpful for me just being around them.”

Does it help you set up some goals now being around those guys at the next level?

“Yeah, it’s been awesome. “Just to see my mates get to where their goals have taken them, hopefully one day that’s me but obviously I’ve got to keep working.”

What are some of those goals you’re setting up now?

“Obviously I’d love to play in the (national) carnival, to have a good shot at that would be awesome. “But obviously AFL’s the goal in the end for most of us boys who are here so if that happens, that’s awesome. “But if not, then I’ll keep working.”