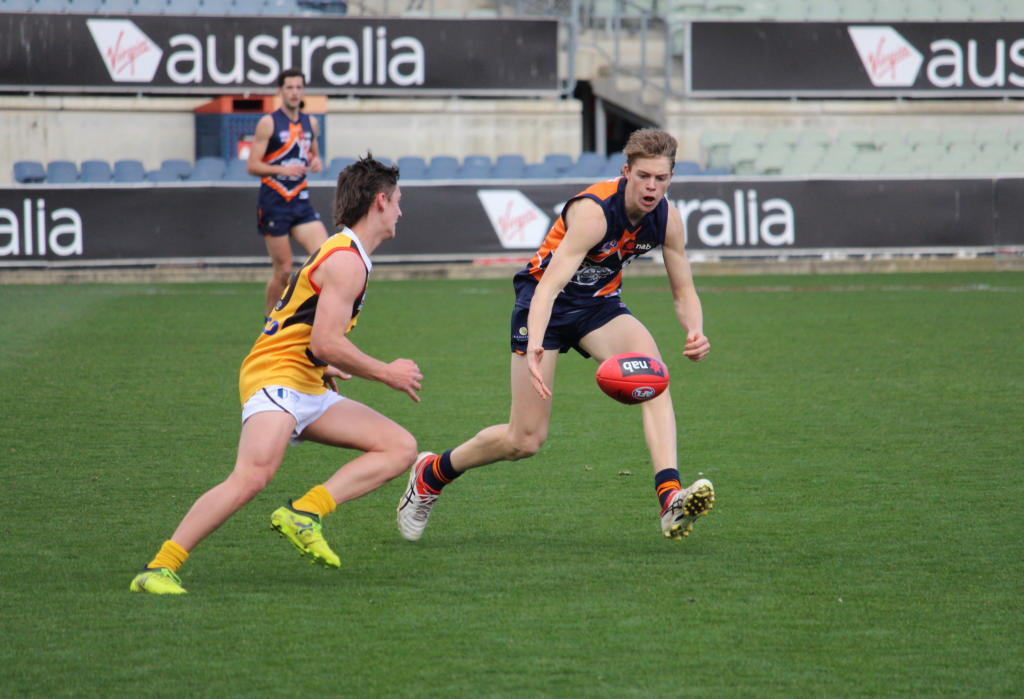 AS the postponement of all seasons commenced over the last few weeks, we head back to the pre-season a month earlier where we sat down with a number of athletes across the country. In a special Question and Answer (Q&A) feature, Draft Central‘s Michael Alvaro chatted with Calder Cannons’ Joshua Eyre at the NAB League Fitness Testing Day hosted by Rookie Me.

The raw 197cm prospect featured up either end and even on a wing for Calder throughout eight NAB League outings in 2019, but is looking to cement his spot across centre half-forward this season having impressed with his leap and clean hands. Eyre is also part of the Essendon Next Generation Academy (NGA) alongside his younger brother, with both players looking to have a consistent, injury-free run in 2020. The 17-year-old would have been ready to go come Round 1 or 2, but will now have to wait for his chance to impress.

MA: How’s the day been so far?

JE: “It’s been unreal, loving it. “I haven’t really done it before so it’s a good experience.”

Being part of the Essendon NGA with Cody Brand, what’s that been like?

“Yeah, good. “I’ve only had the one session there so far but I’ve been loving it. Very lucky.”

And being around the Vic Metro Hub, how’s that aiding your development?

“It’ll be really good. “Hopefully I’m lucky enough to get a game but yeah, it’s good.”

Juggling a few teams this year, who are you looking forward to playing alongside?

“I’m looking forward to Calder, just playing alongside Jackson Cardillo and Cody Brand. “We should have a good year, we’re looking good.”

You’ve played a little bit of everywhere, are you looking to nail down a particular position?

“I’m hoping to play centre half-forward this year. “I feel like that suits me well but I’m open to play anywhere, whether I go back or maybe even a wing.”

What are some of the things you’re looking to work on this season?

“Probably just making sure I stay involved in the game, just to make sure my work rate’s up and just getting a lot of the footy.”

Have you set up a few goals for the year?

“I want to obviously play the Metro games and be lucky enough to get drafted at the end of the year. “But I just want to put together a good season.”

Your brother’s part of the Essendon NGA as well, are you passing on a few tips?

“He’s probably a bit better than I was when I was that age but he’s going through the same injuries that I had through that period which is a but unlucky, but at least it means he’s going to grow which is good for him. He’s going well.”

Have you managed a good bill of health now heading into Round 1?

“Hopefully. I’ve just come off a hamstring – the bone on my hamstring has flared up a bit. “But I’m working back into that so hopefully in Round 1 or 2 I should be back.”