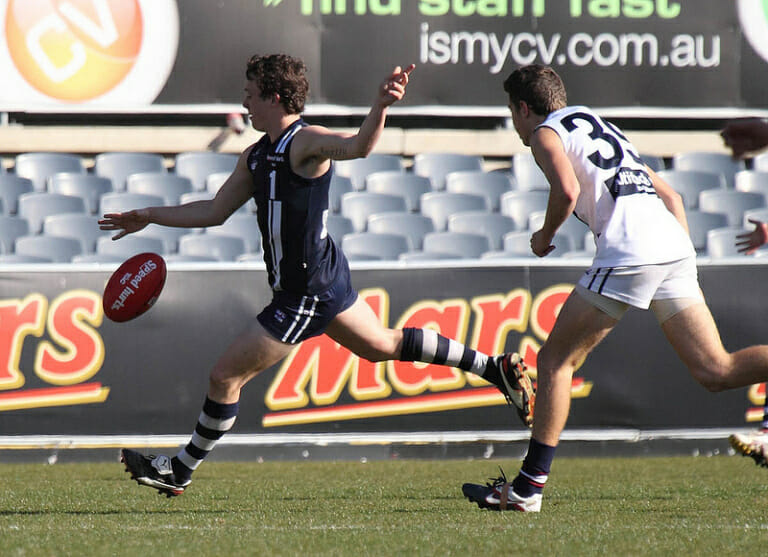 IF you are missing footy like we are, then let us somewhat salvage that with a look back in a new series of Classic Contests. In today’s contest we look at one of the would-have-been Round 7 clashes in the NAB League this year between the Western Jets and Geelong Falcons. In this edition, we wind back the clock to 2013, when the two sides played out a thriller in Williamstown.

Geelong scraped past Western in the 10th TAC Cup round of 2013, taking the four points home from Downer Oval in a close encounter. The Falcons came in sitting pretty atop the ladder at 8-1, but suffered a 107-point pounding at the hands of the Christian Petracca-inspired Eastern Ranges in Round 8. Western’s form saw it enter on a two-game winning run, overcoming a 0-3-1 record in the previous month to sit sixth at 4-4-1 overall.

The Jets boasted five eventual draftees on the day, with Hawthorn’s James Sicily the prime top-ager of the group and the only one taken in the 2013 AFL Draft. Three bottom-aged Jets – Dillon Viojo-Rainbow, Connor Menadue, and Brenton Payne – would be picked up in their draft year (2014), while Fremantle mature-ager Brett Bewley eventually earned his spot at the elite level after a fantastic VFL career with Williamstown.

The visitors would have 11 players drafted over the next two seasons, but could only lay claim to three in this clash with 2014 Rising Star winner and new Sydney recruit, Lewis Taylor the pick of the bunch. Bottom-aged utility Teia Miles was also on the park, and has now returned home to Barwon Heads after a six-year career at Hawthorn. Former Geelong Cats rookie Nick Bourke also took the field, finding plenty of the ball through midfield.

The match proved one of two halves, with Western getting the better of the first before Geelong gained the late ascendancy. Three goals to two in the opening term saw the Jets sneak seven points ahead, a margin which doubled at the main break on the back of another four goals to Geelong’s three.

But as champion teams do, Geelong found a way to shift the momentum and swing on top when it mattered, helping themselves to a four-goal to one third quarter to move two points ahead at the final break. The Falcons’ superior finishing despite boasting three less scoring shots gave them the upper hand, as they managed the typically tough Williamstown conditions well.

Geelong would again edge a tense and low-scoring final term by 1.3 to Western’s 1.2, sealing the win with a much more complete second half performance where its midfield began to click into gear, and its forwards would pounce on the third term momentum shift.

Future second round draft selection Taylor was named best afield for his mammoth 37 disposal performance, dominating the ground ball while spreading well to get on the end of 18 handball receives. Bourke and Jacob Sharp also notched up 30 and 28 disposals respectively to aid Taylor with terrific efficiency, while Matthew Boag led the goalkicking stakes (three), and Luke Davis dominated the ruck with 30 hitouts. Miles, the only other Falcons draftee afield racked up eight marks from his 15 touches.

Sicily was, unsurprisingly among Western’s best with 24 disposals and six marks, while Menadue (13 disposals) and wonder-boot Viojo-Rainbow (13) were also recognised for their contributions as bottom-agers. WRFL guns Braden Ferrari and David Iaccarino took out their side’s top votes though, while future St Kilda rookie Payne snagged three goals to also be thereabouts. Bewley had a steady day with 18 touches, while former Williamstown teammate Billy Myers collected the same amount.

The match was the only fixture between the two sides in 2013, as Geelong went on to finish the regular season in first at 14-3, while Western finished fifth at 9-7. The Falcons’ season would come to a disappointing end at the hands of eventual premier, Eastern in the preliminary finals, with Western falling to Calder a week earlier.