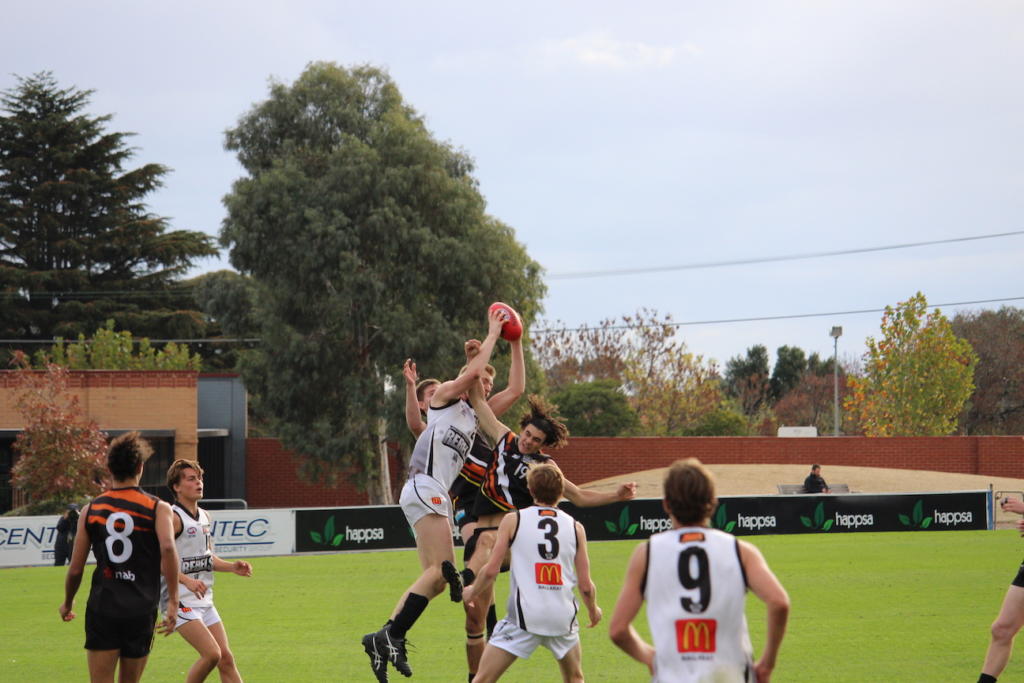 ROUND 5 of the 2019 NAB League season saw the Victorian mainstays peg back their Northern visitors in an action packed nine-game weekend. Sandringham and Eastern delivered big wins over the two Queensland academies at Trevor Barker Oval, while the Sydney Academy won strongly to remain undefeated alongside Dandenong (3-0-1).

But first to take the field were the Bendigo Pioneers and Northern Knights at Queen Elizabeth Oval, with the visitors taking four points back to Preston after trailing at every other break. After streaming ahead by 17 points at half-time with double the goal tally, the Pioneers ran out of legs to be held to just one major in the second half as the Knights snuck ahead to come away five-point victors.

As was a theme in Round 5, both sides were weakened but had some solid talent running around from each age bracket. Josh D’Intinosante and Sunny Brazier had plenty of the ball while also hitting the scoreboard, while Lachlan Potter created some zip on the outside. Top-age Pioneers James Schischka, Ben Worme, and Logan Fitzgerald all had 25 touches, while bottom-age jet Jack Ginnivan showed promise with 20 and a goal.

Sam Philp was the best ball winner of the 2019 draftees, earning 17 touches for Northern, while Swans recruit Brady Rowles had just 11 as he popped up in spurts. Ryan Sturgess, who almost joined Philp at the Blues as a supplementary top-up, was also impressive with 21 disposals and seven marks.

Saturday’s first game opened a Blacktown double-header as the Swans Academy accounted for Murray in a close encounter to move to equal-first. The Sydneysiders shot out of the blocks with five goals to nil to open the match, adding another four in the second term to lead by six goals at half time. Although they fared much better in the second half, the Bushrangers could not fully recover the deficit and went down by 24 points.

Sydney over-ager Kyle Martin led all comers with 29 disposals, just one touch ahead of Bushrangers runner Cam Wild (28, one goal). Dylan Clarke also led the way for Murray with 23 disposals, with Jye Chalcraft, Jimmy Boyer, and Sam Durham all also ticking over the 20-mark. Max Geddes (23 disposals) was also influential for the Swans, but it was big man Hamish Ellem who stole the show with 22 disposals, nine marks, and 3.3 in a performance which went a long way to securing him an Allies berth.

The GWS Academy was next up on its home turf against another Victorian country side in Gippsland, only it could not repeat the feats of its New South Wales rival. The GIANTS trailed at every break but brought the contest to the highly-fancied Power, getting within a single point at three-quarter time before falling by nine points.

Skipping back, and Dandenong extended its unbeaten start to the season with a huge win over Oakleigh on home turf. After a tight opener, the Stingrays played the conditions perfectly to pile on eight goals in the second term, and seven in the last to storm away 70-point victors with 11 individual goalkickers.

Lachlan Williams and Ned Cahill slotted three majors each for the winners, while bottom-ager Will Bravo slotted two and Richmond recruit Bigoa Nyuon managed one from 17 touches. Cahill was the leading disposal getter with 29, while Joe Ayton-Delaney, Lochlan Jenkins, and Trent Bianco all managed 24 for the Chargers. Port draftee Dylan Williams went goalless in a different role, while Gold Coast mid-season recruit Mitch Riordan had 15 touches and Melbourne rookie Austin Bradtke had just eight disposals and a goal.

Saturday’s other double-header began with Sandringham thumping the Brisbane Lions Academy by 97 points on home turf. The Lions had won just one game to that point, and were in for more immediate pain as the Dragons helped themselves to 13 first half goals while holding the visitors to one. There was no way back from there, with Sandringham coasting to victory.

Brisbane skipper Will Martyn was one of the sole Lions to stand up all day, collecting a game-high 31 touches while fellow Richmond draftee Noah Cumberland was kept to just nine. Louis Butler and Ryan Byrnes strutted their stuff for the Dragons to win plenty of the ball, while Miles Bergman started to get into his stride with 17 touches, Jack Bell impressed with two goals from the same disposal haul, and Blake O’Leary finished with a game-high three goals.

Eastern completed the academy rout with a defensively sound 59-point thumping of Gold Coast’s academy, keeping the SUNS to just two goals. After just three goals were scored in the first half, the Ranges clicked into gear to break the game open with seven in the third term and run home comfortable winners.

Zak Pretty had a monster day out with 37 disposals, aided well by Lachlan Stapleton (27) and Mitch Mellis (24), while bottom-age defenders Wil Parker and Josh Clarke also impressed. Bailey White led the goal count with four, while Jamieson Rossiter managed three and Cody Hirst played one of his last games before being snapped up by Sydney. Skipper Connor Budarick was the standout for Gold Coast, accumulating 27 touches, with bottom-ager Max Pescud also thereabouts, and fellow SUNS recruits Matt Conroy and Patrick Murtagh also taking the field.

Saturday’s final fixture saw Calder edge Geelong in a close battle at Highgate Recreation Reserve, with both sides enjoying time in the lead. The Cannons looked the goods after coming out on top in a low-scoring first half, but were pegged back to within a point at the final break. Keeping their heads, the hosts held on to win by seven points.

Sam Ramsay was the sole draftee afield, and he had a decent outing with 27 disposals – behind only Daniel Mott (29) and Brodie Newman (36). Ned Gentile booted three goals from 21 disposals to also be among the best, while skipper Jesse Clark claimed that honour for Geelong. Nineteen-year-old Charlie Sprague was another to impress with two goals from 18 touches, with fellow over-ager Henry Stubbings managing 20.

Fast-forward to Sunday, and Western got the better of Tasmania in their trip to the Apple Isle, trumping the hosts by 47 points to get within touch of the top four. A steady opening half saw Tasmania prove wasteful, booting 1.6 as Western eventually took flight to run home with six goals to two after half-time.

Competition leading goalkicker Archi Manton took full toll with a game-high three majors, supported well by Carlton rookie Josh Honey (two from 25 disposals) and bottom-age jet Eddie Ford (two from 16 disposals). Darcy Cassar racked it up across half back to finish with 31 disposals, while Patrick Walker and Bailey Gordon shared that feat for Tasmania (25). Isaac Chugg was also impressive on debut for a Devils side which was missing a lot of its star power.

Greater Western Victoria (GWV) Rebels took home a huge win in the round’s final match, defeating the Northern Territory Thunder Academy by 55 points on neutral territory. The Rebels never looked back after a 10 goals to one opening half at Windy Hill, which proved more than enough for the win despite a more even second half.

Nick Caris led the goal count with four for GWV, while Jay Rantall (27 disposals, two goals), Matty Lloyd (28, two), and Riley Polkinghorne (23, two) all had an impact. There was plenty of class on show for NT despite the loss too, with Beau O’Connell (29 disposals, two goals) having a day out, while Ben Jungfer had it 28 times, Joel Jeffrey had 24 touches and six marks, and new SUNS rookie Malcolm Rosas Jnr also got on the park.