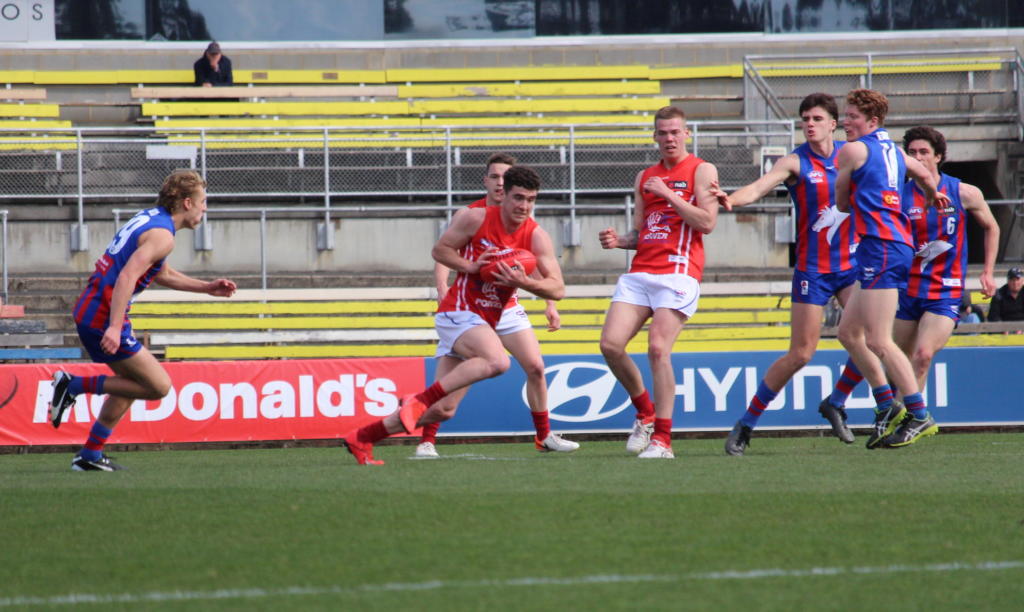 IF you are missing footy like we are, then let us somewhat salvage that with a look back in a new series of Classic Contests. In today’s contest we look at one of the would-have-been Round 7 clashes in the NAB League this year between the Gippsland Power and Oakleigh Chargers. In this edition, we wind back the clock only one year to 2019, when the two sides locked horns in a classic qualifying final at Ikon Park.

Both Gippsland and Oakleigh finished the NAB League regular season just one game adrift from top spot at 11-4, enough to see them earn a week’s rest come wildcard round. They would meet in the qualifying final, the last fixture of the competition’s first post-season weekend, and produce an instant classic full of momentum swings.

Oakleigh boasted the would-be first and second picks of the 2019 draft, but the Power had a greater number of draftees on the park in this bout led by Sam Flanders and Caleb Serong. The key absence of skipper Brock Smith would prove vital though, with a certain bottom-aged Oakleigh star having a big impact on the game.

The Chargers stormed out of the blocks with five goals to two in the opening term, spearheaded by in-form forward Jamarra Ugle-Hagan at what proved to be the scoring end. Needing a spark at 23 points down in the first 15 minutes, the Power turned to Serong who provided a lift with his aggression from midfield.

But it was Trent Baldi who would have an even bigger say with his scoreboard impact, slamming home consecutive majors to keep Gippsland in touch. An opportunistic Reef McInnes goal late hurt the Power though, especially given they had kept Noah Anderson and Matt Rowell relatively quiet to that point. It would have to last.

The second period of play would belong to Flanders, who stole the show with one of the greatest 10-minute patches of elite junior football in history. Pushing forward, the dynamic first round draftee showed up his new Gold Coast teammates on the opposing side with four consecutive goals from over 10 touches to break the game open.

On a day where scoring was hard to come by, Flanders’ feats helped the Power pile on nine of the last 10 goals to claim a 23-point lead at the main break. The seven-goal term also went unanswered up the other end as the usually potent Oakleigh side would require a big lift come the second half with much of its bottom-age brigade standing up to that point.

Keeping with the ebb and flow of the contest, it was Oakleigh’s turn to get on top in the third stanza, but their four goals to two was not enough to reclaim the lead. But having created more clear-cut chances, the Chargers drew back to within single digits to give themselves a sniff heading into the final change, albeit if they had spurned a couple of chances to further cut the deficit.

Ugle-Hagan converted a third major early in the fourth quarter as the heavens opened, turning the game into an all-out slog. With goals hard to come by, Riley Baldi‘s major to push the margin out to over a kick looked a big one, but Oakleigh found avenues to the big sticks when they needed them as skipper Trent Bianco sunk a long bomb, and Nick Stathopoulos booted a screamer to seal the come-from-behind win.

Proving impossible to keep down, Rowell and Anderson led the disposal count among two others to lead the Oakleigh’s charge. Bottom-age jet Will Phillips also had 29 touches and added a goal for the winners, while Serong managed the same feat in a valiant effort for Gippsland. Flanders would finish with 27 disposals to go with his four second quarter goals, while St Kilda draftee Leo Connolly also hit the scoreboard from 23 touches.

Oakleigh’s bottom-age brigade proved somewhat of a difference aside from the heavyweight battle through midfield, with the likes of Finlay Macrae, Bailey Laurie, and Ugle-Hagan producing the goods early on. Under the leadership of Bianco (24 disposals, one goal), they proved they were not just there to simply fill the numbers.

The Chargers would go on to claim a dominant grand final win over Eastern after comfortably accounting for Sandringham in the preliminary final stage, while Gippsland were done-over by the Ranges at the same mark after overcoming Western in the semi-finals. With a wealth of draftees coming from either side, they were two of the premier clubs of the competition and stand to have a great impact come draft time in 2020 as well.