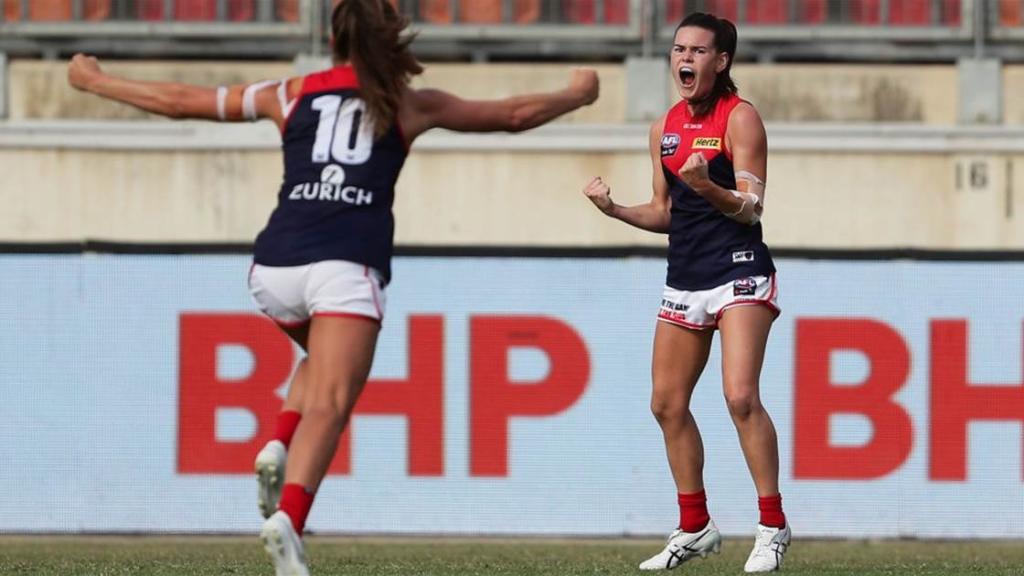 IN a new countdown, Draft Central recalls the Top 10 AFL Women’s games for season 2020, ending with our top pick which saw Melbourne claim a dramatic come-from-behind finals win over GWS via the boot of an unlikely hero. On the road and in their first ever post-season match, the Demons had to raise hell to come out on top.

The match-up produced an opening term befitting of the tense nature of finals time, with both sides going goalless but the contest hot as GWS snuck ahead 2-1 in a scoreline reminiscent of a soccer game.  GIANTS skipper Alicia Eva made her presence felt early on, snapping through the point to put her side ahead while also getting some attention back after pummelling high into Melbourne star, Karen Paxman. The home side looked set to find the big sticks first when Rebecca Privitelli juggled a mark deep inside 50, but her kick held up in the breeze and proved easy picking for the Melbourne defence to prevent a score altogether.

It took a strike from Lily Mithen, who had never previously kicked a goal in her four-year AFL Women’s career to see the first set of six points tick over, converting from a tight angle to put Melbourne ahead after earning a free kick. The excitement was only made more evident in the absence of a crowd, with her teammates duly getting around her. Despite holding territory at what looked like the scoring end, the Demons almost saw their opponent go coast-to-coast in the last 10 minutes, but Aimee Schmidt pulled her shot badly while streaming into goal. She made amends for the miss with a wonderful effort in the final minute of the half, though, benefitting from a spill created by Privitelli at ground level and snapping home the GIANTS’ first major. The buffer was back to just a sole point at the main break, with the famed premiership quarter ahead.

After a tense opening few minutes, Jess Dal Pos earned a free kick within the forward 50 arc and converted a booming set shot to put GWS back in front. It would prove the catalyst for what seemed like a game-breaking run for the GIANTS, owning the term with 2.3 while holding Melbourne scoreless. The GIANTS may have again spurned some guilt-edged chances in front of goal, but another major in the final minute – this time via Cora Staunton and a lucky falcon – had the home side dreaming of a would-be preliminary final berth. The GIANTS were 14 point to the good come the final turn, a margin which exceeded the score Melbourne had put on the board to that point.

The failure to convert in front of goal would come back to haunt GWS though, and Shelley Scott’s accurate set shot gave the Demons a sniff with seven-and-a-half minutes left to play. The pressure only mounted as Adelaide premiership star and 2020 injury top-up player Sarah Perkins slammed home another major, bringing the margin to within a goal. If Melbourne’s pressure hadn’t already set the alarm bells ringing, then the scoreboard would have for GWS. No warning could prevent what eventuated, as Mithen took a terrific one-on-one mark with a tick over a minute left on the clock, and remarkably converted the shot to give her side the lead once again at the ideal time. The final siren would sound with Melbourne once again heading inside forward 50, and scenes of jubilation ensuing.

The cream rose to the top for Melbourne, with all the usual experienced suspects having their say. Daisy Pearce led her side’s disposal count with 22 from defence alongside 15 from Libby Birch, while elite midfield mover Paxman notched 20. The aerial presence of Lauren Pearce and Eden Zanker proved valuable for the winners, but it was Mithen’s two goals which undeniably made her the hero in just her third outing for the season. For the GIANTS, Alyce Parker was at her usual best with a game-high 23 disposals, aided by Rebecca Beeson and Haneen Zreika. The likes of Eva, Schmidt, and Tait Mackrill had what-if games going forward, with their chances adding to the unfortunate statistic of GWS losing despite managing two more scoring shots. The Dees were poised to go on into the preliminary final round, but of course saw the season cut short and a remarkable run, ended.